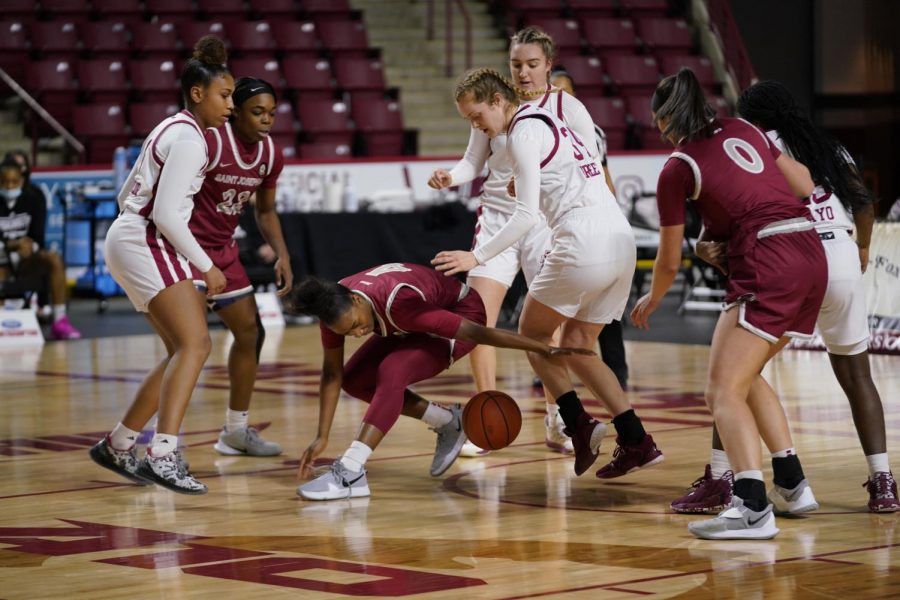 The Massachusetts women’s basketball team lost the defensive battle to Saint Joseph’s in its 76-69 loss on Friday.

After two ugly shooting games for the Minutewomen last weekend, focus was turned on offensive execution and cleaning up simple mistakes on that end of the floor. But like in any game of basketball, no offense can win a game without help on the defensive end.

The Hawks (5-1, 3-1 Atlantic 10) were able to beat UMass (10-4, 6-3 A-10) on both ends of the floor on Friday, capitalizing on easy layups and 3-point opportunities. The loss marks the second most points the Minutewomen have let up this season.

“We didn’t defend; we didn’t defend here today,” head coach Tory Verdi said. “It was really disappointing to see because we covered all their action. Coming in if somebody told me this is how we would have played defensively; I wouldn’t have believed it.”

The strength for the Minutewomen defense so far this season has been their versatility. The consistent ability to throw both multiple zone and man defenses at teams successfully has ultimately led to some crucial wins.

Coming into today, the Hawk’s style of play was no surprise, especially when UMass has already faced talented offensive teams.

In only the second game this season, the Minutewomen found themselves down big against Boston College but threw a zone defense at them to shake things up. Despite the overtime loss, it was the clean, team based defensive effort that brought UMass back from being down as many as 20 that game.

When UMass beat Fordham for the first time in 11 years, the hard-fought game was defined by the grit and effort from the Minutewomen’s defense. Today, it was a totally different team that the Hawks scored against.

Verdi has harped on his team about execution and effort all season long. No matter the opponent, rebounding and preventing second chance shots is key. UMass gave up eight offensive boards against the Hawks.

During a weekly press conference on Wednesday, Verdi explained how the Hawks run a similar motion offense to Fordham, using down screens and back screens to get easy layups down low. Freshman Ber’Nyah Mayo was able to find success early by back door cutting for easy two pointers, but it didn’t take long for the Hawks to throw the same play right back at UMass.

The difference in the game against Fordham and Friday’s game was that UMass did not mirror the way they shut down Fordham’s motion.

For three quarters, the score was either tied or just a matter of a few layups. The contentment with trading baskets caught up with UMass when the Hawks were able to step on the gas and attack a flat-footed disconnected defensive.

“I think we still played hard,” Sims said. “We got lost and they scored so it wasn’t the greatest [defense] today.”

As uncharacteristic as this loss was for UMass, there is not a lot of time to dwell on it. The Minutewomen face La Salle for the second time this season, after UMass won 78-61 the first round.

Tip-off in Amherst on Sunday is scheduled for 1 p.m.