UMass lead 4-0 at one point in the game 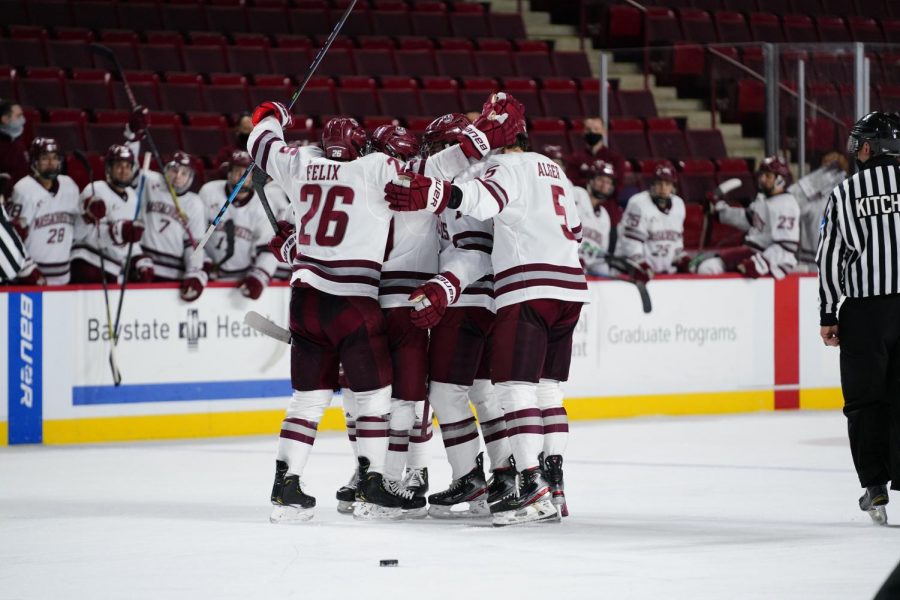 If there were fans in the stands on Saturday instead of cardboard cutouts, they would have still been settling into their seats when Jerry Harding opened the scoring for the Massachusetts hockey team.

With just two and a half minutes having run off the clock, Anthony Del Gaizo raced to a puck on the forecheck, reaching and shoveling it to an open Harding in front of net. Harding deposited it into the back of the net—the first goal of his college hockey career—to put the No. 9 Minutemen (8-3-1, 8-3-1 Hockey East) up 1-0—part of a hot start UMass used to beat No. 13 Northeastern (3-3-2, 3-3-2 HEA), 5-3.

Three minutes later, Matthew Kessel found himself on a breakaway, looking to beat Huskie goaltender Connor Murphy. Instead, Julian Kislin stuck his stick between Kessel’s legs, taking the UMass defenseman to the ice and granting him a penalty shot.

On the penalty shot, Kessel wouldn’t be denied.  The sophomore deked in front of Murphy, eventually potting the puck on a forehand wrister from the crease.

“I had no problem—I never questioned giving it to anybody else,” Carvel said. “I like giving the penalty shot to the guy who’s earned it. That was an easy decision to let him take that penalty shot.”

The Minutemen weren’t done piling on goals in the first period, however, as Zac Jones got in on the scoring. Jones ripped a shot from the point, somehow missed three Huskies and three Minutemen in front of the net, and put UMass up 3-0 before the first period had even come to a close.

When the opening 20 minutes finished, the Minutemen not only held a three-goal lead but had thoroughly outplayed Northeastern, outshooting the Huskies 15-8 and winning 14 of the 18 faceoffs.

UMass picked up right where they’d left off in the second frame, scoring 1:46 into the period. This time it was Carson Gicewicz tipping home a shot, putting the senior transfer into the lead of the national goal-scoring race.

The Huskies managed to narrow the gap less than two minutes later thanks to Zach Solow jamming home a rebound on the power play—UMass’ first power play goal conceded in its past 19 tries.

Despite the goal, the Minutemen still controlled the period, outshooting their opponents 9-4.

The third period, on the other hand, was a different story.

“We take a penalty with eight seconds left in the second period,” Carvel said. “So that gives Northeastern hope going into the third period.”

UMass came into the final 20 minutes with a commanding 4-1 lead but saw the Huskies chip away at the lead as the ice seemed slanted in Northeastern’s.

Aiden McDonough scored on the power play to start the period, closing the gap to 4-2.

Then, with five minutes left, Grant Jozefek wrapped around the Minutemen net, passing across the crease to Dylan Jackson who snuck one past Matt Murray’s blocker side to cut the game to just a one-goal lead.

UMass—playing its third game in a four-day stretch—looked to cling to the 4-3 advantage and managed to do just that. A Garrett Wait empty net goal with 36 second left on the clock put the game out of reach.

“I thought we did a good job managing guys energy,” Carvel said. “Playing four lines, it never felt like our guys showed fatigue.”

In Matt Murray’s eighth-straight start, the senior’s play seemed to mimic the rest of his teammates. In the first two-plus periods, Murray looked borderline unbeatable, even going as far as making a diving cross-crease save to keep the Huskies off the board in the first period.

However, when the final buzzer sounded Murray stood with a pedestrian stat line of 16 saves on 19 shots. The win did propel Murray into a tie for first place on UMass’ all-time wins list for goaltenders.

“Congrats to Matt Murray,” Carvel said after the game, “for tying the UMass record for wins by a goalie.”

With the win, the Minutemen extend their win streak to six straight—tied for the longest in program history.