Not even a full season into her career, Sam Breen begins to establish her legacy as a Minutewoman 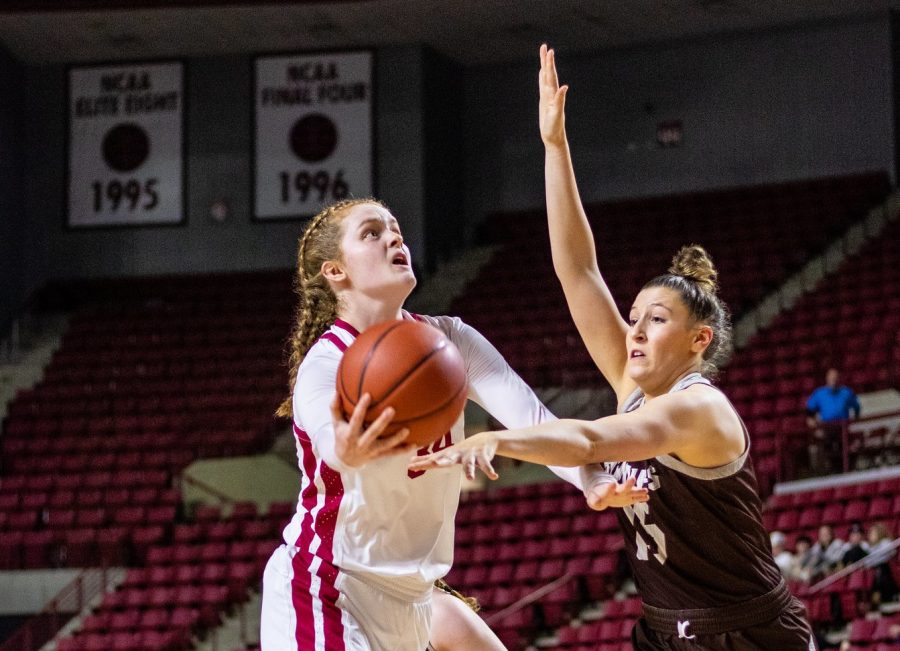 Two years ago, Sam Breen, the current captain of the Massachusetts women’s basketball team and its leading scorer found herself searching for passion. After being limited to a bench role as a “three-point specialist” at Penn State, former Pennsylvania Gatorade Player of the Year Sam Breen entered the transfer portal just four games into her sophomore season.

Her frustration as a player went beyond the unfulfilled potential in her skill set: her heart and mind weren’t fully invested in the game she once loved so much.

“There was a point where I just wasn’t loving or really even liking basketball, and it’s been such a big part of my life,” said Breen. “So I knew with the right coaches and team, I could get that love [for basketball] back again.”

That’s where the UMass women’s basketball program and head coach Tory Verdi came in. While UMass did not actively recruit her in high school, Verdi and the program reached out when her name popped up on the portal. He knew that once Breen made the visit to Amherst —an eight-and-a-half-hour drive from her hometown — and met the coaching staff, it’d be tough for her to say no – and he was right.

“I kind of just had a gut feeling [that I wanted to play at UMass] … which is something that I didn’t necessarily have as strong of a feeling at [Penn State],” Breen said of her mindset after her visit to campus. “Talking to coach Verdi and him just letting me know he’d help build my confidence back up… was probably the biggest factor [in my decision] because that was the biggest part of coaching that I needed at the time.”

But once Breen officially made the switch to the Minutewomen, it was still a long process towards actually playing competitive games for the team. Due to NCAA eligibility rules, Breen had to sit out two full semesters before being allowed to take the court for UMass. Yet Breen didn’t take her time off from the team lightly.

Assistant coach Mike Leflar said that when Breen came back from the summer heading into her junior year, she was in “the best shape of her life.” The forward that wasn’t even sure if she liked basketball less than a year ago was now fully committed to growing her game and skill set. Breen quickly showed the type of player she would become.

Before she could suit up, Breen  became a dominant force at practice – an aspect of the game she didn’t used to love, but now describes as “the highlight” of her day. During practices last season, Breen frustrated the coaching staff for two reasons: one being that she couldn’t put her skills to use during games, and two,  the challenges she presented to the starters defensively.

Since the team was unable to play her during the fall, they had her on the scout team running that week’s opponent’s offense against the starters. Breen ended up presenting more problems for the top unit than anticipated, as Verdi said, “there were times where we couldn’t stop her.” Now, instead of having to gameplan against Breen in practice, Verdi’s just relieved that she’s on his team now.

As a result, it was no surprise to the coaching staff when she immediately slid in as the team’s most valuable scoring option. In the 20 games after she was declared eligible, Breen paced the team in both scoring (16.9 points per game) and rebounding (9.2 per game). A huge factor in her success was her comfort level on the court. Breen was surrounded by teammates she trusted and worked well with, despite limited time together.

“Playing with [my teammates] on the court, I feel like the chemistry was there right off the bat,” Breen said of her early time with the team. “I knew it would be, but after the first couple minutes of my first game, getting the jitters out, it was like I’d been playing the whole season.

Her debut came off the bench on December 21, 2019 but she would not start a game for the Minutewomen until more than a month later. After the team’s game against Rhode Island in mid-January, during which Breen scored 26 points in 37 minutes, Verdi was fully convinced of her sheer talent for the game of basketball.

“It wasn’t until the Rhode Island game where I saw Sam Breen the player and knew how special she was, because individually, she took over that game,” said Verdi. “I had to hide my composure at certain times because as a coach, I was wowed by some of the things she was doing offensively… but I knew after that game that we had a special player.”

While it is on display every time she hits the floor, Breen’s dangerously versatile skill set was epitomized this season in UMass’s matchup against Saint John’s. After leading the team with 23 points, Breen found the ball in her hands with the game tied and the shot clock turned off. But after receiving a double team, she fired a pass to forward Maddie Sims under the basket, who was fouled.

After Sims missed her second free throw with the game still tied, the ball was tipped around in the air. Breen, who had the awareness to get under the basket, found the ball in her hands with a second left and hit the game-winning layup at the buzzer.

Beyond her basketball skills, the biggest development Breen has had to make from last year to this one is as a leader. While the senior forward isn’t the most vocal player on the court – that honor would likely go to guard Destiney Philoxy – it is notable that she was named a team captain after just one semester playing for the Minutewomen.

While Breen says she’s more of a lead by example person by nature, her role as captain this season has pushed her to learn how to be a more vocal leader. Leflar feels that her consistency in both these areas is what makes her stand out on this team.

Even with her relative lack of vocality at times, one of the reasons Verdi and the rest of the staff have such confidence in her ability to lead is the trust they have in one another. This stems from the consistent communication the two have engaged in ever since he helped Breen regain her self-confidence and love for the game.

“Developing that relationship and talking about life outside of basketball has really helped,” said Breen. “A big thing in trusting one another is having each other’s backs and holding one another accountable, and I think he definitely holds me accountable and that’s helped me get better physically and mentally.”

“It’s that bond and that trust that [Breen and I] have in one another that makes our program so much better,” said Verdi.

The program he speaks of is now 8-2 in its first full season with Breen, and a big reason for that is her commitment to their culture – both in the short and long term. While the program always tries to reward its players for working hard and being a good teammate, in this unprecedented year, it’s all about winning the day.

With schedule changes happening on a moment’s notice and the team not knowing if or when they’ll be able to play a given game, Verdi wants the team to take things one day at a time this season.

“I think ‘Win the Day’ is something we all try to live by, and me especially, just because you never really know when you could be sent home or have to quarantine for two weeks,” said Breen of her commitment to the mantra. “You’re not always going to hit all of your shots, but on the days that you’re not doing your best on the court, you have to bring all the other little things, like energy, holding each other accountable, and at least effort.”

As highlighted by this season, Breen’s commitment to the Minutewomen already has her on track to shape a lasting legacy for herself. At the moment, she is fourth in program history in rebounds per game (8.8), second in points per game (17.3), and has the next season and-a-half to cement her place in UMass lore after being granted an extra year of eligibility.

“When it’s all said and done, she could be – if not the best player to ever play in a UMass uniform, [then] one of the top three,” Verdi said.

But Breen, as she has made abundantly clear time and time again, wants to establish herself as someone who cares much more about team success than individual accolades.

“I would like to win an Atlantic 10 Championship, [because] leaving that legacy behind as a collective group would be incredible,” Breen said.

Beyond basketball, she wants people to understand the type of person that she is, both in terms of her attitude and philosophy. And these characteristics Breen portrays have certainly been shaped by her time in Amherst.

“I definitely want people to remember me as someone who comes in and works hard every day, and who was just honestly happy,” Breen said. “Because that’s the one word I can use to describe my time at UMass.”