Offensive struggles have played a key role in recent losses 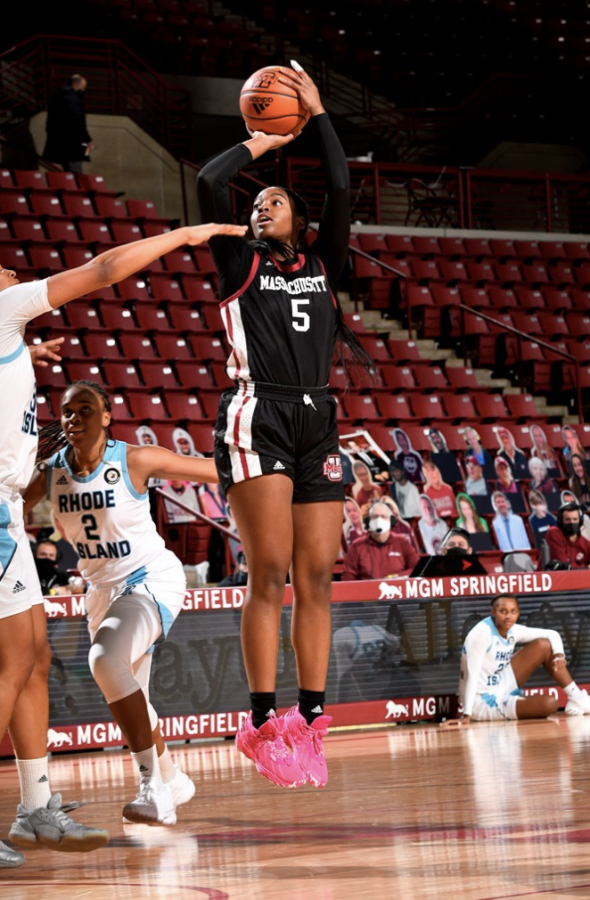 On paper, the Massachsuetts women’s basketball team’s offense has not been a concern – far from it, in fact. At just under 70 points per game, the Minutewomen lead the Atlantic 10 Conference in scoring and feature the second-best individual scorer in the A-10 in forward Sam Breen (17.6 PPG).

With that being said, two of the team’s most recent losses – Saint Louis on Sunday and Rhode Island earlier this month – have been plagued by poor shooting efficiency and an overall lack of offensive execution. During those two defeats, UMass (10-3, 6-2 A-10) scored 20 points per game less than its season average while making just 32 percent of its attempts from the field.

“Our lack of offensive production affects who we are defensively, and we can’t allow that to happen because there are going to be nights where we just have to grind it out,” Verdi said. “We need to be consistent, and there’s going to be some game where opponents scout you and they take away your strengths.”

A big part of this during the losses to the Rams and the Billikens was the Minutewomen’s relative selfishness. While the low field goal numbers certainly limit the opportunity for assists, they still finished with just 11 and eight dimes during those two games, respectively, their two lowest marks of the season.

“When we struggle offensively, sometimes players take it amongst themselves to force the issue and start going one-on-one, and that’s not what we want to have happen,” Verdi said. “[Offensively], we want to continue to move the ball and make your offense work for you.”

It should be noted that just two days before the rough shooting performance against the Billikens, the Minutewomen operated their attack with ease against the same opponent, scoring 78 points with six players contributing at least eight. Because of this, team captain Maddie Sims thinks the second Saint Louis game was just a blip for them, and that they’ll be able to quickly move on from Sunday’s showing.

Another area of concern for UMass in this vein is its free throw shooting. They’ve made just 65 percent of their attempts on the year, which is the second-lowest mark in the A-10 ahead of Rhode Island. However, Verdi doesn’t see this as something that is easily fixable outside of getting to the line and simple execution beyond that.

“I’m not sure how much you can improve free throw shooting,” Verdi said of the team’s woes from the charity stripe. “That’s just a mind over matter [issue], and our players have to step up to the line and think, ‘hey, these are makes,’ and follow through… We want to take 20 free throw attempts per game; that’s our goal.”

For a team that is having its best start to a season in more than four decades, these are minor issues that do not necessarily affect the team’s immediate outlook. But with that great start comes title aspirations, and offensively, these are the problems that must be overcome if they want to content for an A-10 championship and beyond, as Breen and Verdi have both made clear they want to do. A single game featuring a poor shooting effort could be the difference between being eliminated and moving on to the next round.

“We just have to come out and play every game like it’s our last and every game like it’s a championship game,” Sims said of the team’s mentality. “Anybody can come in and win at any point… we’re going to play as hard as we can, no matter who it is or how many games they’ve played.”

The Minutewomen will get a chance to bounce back offensively on their home court against Saint Joseph’s on Friday afternoon, followed by a contest against La Salle on Sunday. Tipoff for both games are scheduled for 1 p.m.