‘This was the next step’: UMass edges out Northeastern, 4-3, in road win 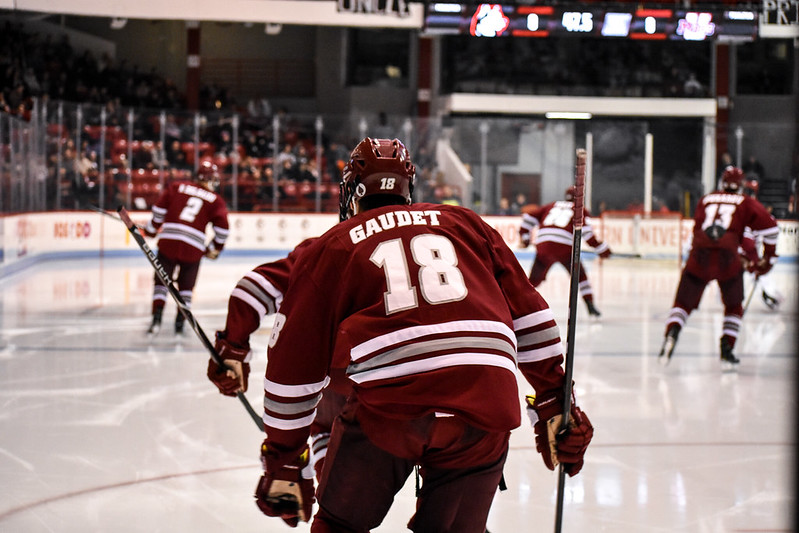 Matt Murray was struggling early in the third period, and the Massachusetts hockey team was on the ropes.

Just a few minutes prior to that, Northeastern freshman Ty Jackson saw some space between Murray and the right post, so he threw the puck off his back from behind the net and tied the game, swinging momentum in favor of the Huskies.

But then the resiliency that UMass head coach Greg Carvel’s Minutemen have become known for began to appear at Matthews Arena Friday night.

Shortly after Harris’ goal to give his squad the lead, Matthew Kessel threw a shot towards the Northeastern net front. Huskies goalie Connor Murphy made the stop, but the puck popped out and there was freshman Josh Lopina to slam it home to tie the game up, 3-3.

“I think Josh Lopina’s been a huge addition to our team,” Carvel said after the 4-3 win Friday night.

Later in the final frame of play with the game tied, UMass sophomore Eric Faith corralled the puck and backhanded one towards Murphy. The Huskies goalie made the first stop, but the rebound landed in front of Oliver Chau who slapped it into the open goal to give UMass the 4-3 lead.

The goal was the eventual game-winner.

“Northeastern made a strong push at the beginning of the third,” Carvel said. “A real sign of character of this team to fight back and find a way to win and put the game away, so very proud of our team tonight.”

Despite losing, Northeastern was the first team to get on the board Friday night. Just seven minutes into the contest, Harris blasted a one-timer from the slot right past Murray’s glove to give the Huskies a 1-0 lead.

It was Harris’ first of two goals on the night. Carvel said after the game that with his crew playing the Huskies again Saturday night, the only adjustment they can make against Harris – a 2018 third-round pick by the Montreal Canadiens – is Murray needs to make the big save.

“Those are the ones where Matt’s got to make a save there,” Carvel said of preventing Harris from more goals. “As well as Matt is playing, he sees those pucks and they don’t go bar in, they go through him. He’s got to make saves there.”

Nevertheless, UMass battled back to tie it, 1-1, when Bobby Trivigno slid the puck past an outstretched Murphy.

In the second period, UMass jumped out to the 2-1 lead when transfer Garrett Wait brought the puck out of the corner on the power play and roofed it over Murphy’s glove.

Friday night’s win makes it five in a row for the Minutemen. Since losing at Merrimack on Dec. 6, a game Carvel called “an eye-opener”, UMass has outscored opponents 22-6 in the five wins. UMass’ head coach attributes much of his squad’s recent success to the weekend they had off between the Merrimack loss and the weekend series against Vermont.

“It really allowed us to not just reset, but to get the team to start to understand what our identity needs to be,” Carvel said of the weekend off. “I don’t think that this group had figured it out.”

Fast forward over the four wins prior to Friday night, all showing progress to Carvel, and it’s safe to dub the 4-3 edging out of Northeastern as the Minutemen’s most important win to date.

“This was the next step,” Carvel said of the win over the Huskies. “Northeastern’s a very good team, very skilled team, very well-coached. I think it was a really good next step for this group. We’re starting to gain a lot of confidence and everything’s different year to year no matter what we did last year or the year before. It doesn’t matter. With nine new kids on this team, we needed to find what makes us good and I think we’re finding it.

“Any time you can come from behind to win, even though we were winning going in [to the third period], that’s a huge confidence builder for our group.”

UMass will look to continue building on its win streak Saturday night in another matchup with Northeastern. Puck drop is slated for 6 p.m. from the Mullins Center.