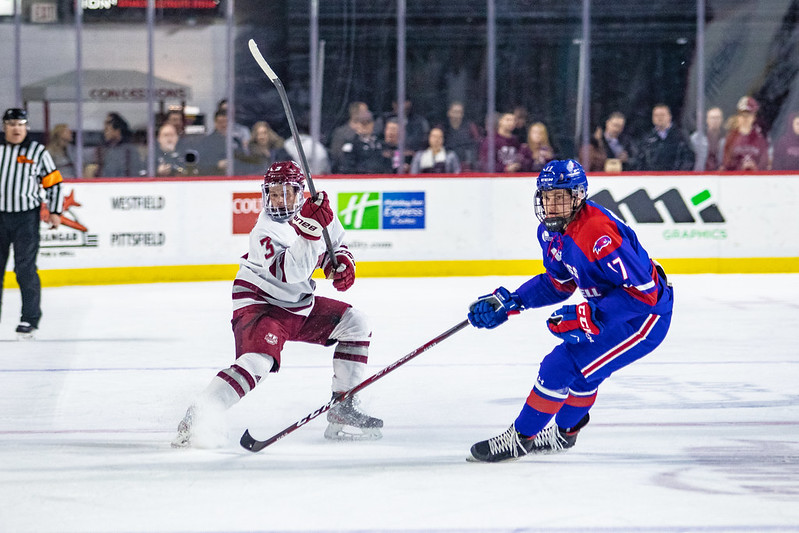 The expression “when it rains it pours” wouldn’t be enough to describe the scene of the Massachusetts hockey team’s dominant victory over No. 16 UMass Lowell (3-2. 3-2 Hockey East) on Friday.

No. 10 UMass (10-5-3, 10-5-3 HEA) came out of the gate with intensity despite having an 8 p.m. start time, as opposed to the late afternoon games the Minutemen had grown accustomed to.

“Maybe it’s just [that] I’m an old man and I was the only one that was tired, but I was concerned at how we were going to come out,” UMass head coach Greg Carvel said after the game. “But the guys did a good job.”

Early on in the frame, Oliver Chau got two good looks on River Hawks goaltender Owen Savory. And though he missed the net on both occasions, those scoring chances were an early sign of things to come.

Just eight minutes in, alternate captain Bobby Trivigno found the back of the net, giving UMass a 1-0 lead. And he wasn’t done scoring just yet. Not even four minutes later, the alternate captain added another goal, this time from a near-impossible angle.

Both goals were assisted by Garrett Wait, who has developed good chemistry on the second line since he was inserted there early in the season.

After dominating the first frame in terms of scoring chances, UMass had UML on its heels, and continued to pound away in the second period.

Matthew Kessel received a pass with a wide-open shot in front of Savory, and picked his corner, giving the Minutemen a 3-0 lead and forcing the River Hawks into a goalie change.

But even new goaltender Henry Welsch could not hold off the high-octane Minutemen offense, as before the period was over Cal Kiefiuk and Jerry Harding were each able to add goals, giving UMass a 5-0 lead through 40 minutes.

The third period didn’t feature any more goals from either team, although the Minutemen continued to generate quality chances throughout the frame, never allowing Lowell to even get on the scoresheet.

Two major focuses for UMass during the week were taking less penalties and getting back to its dominance at the faceoff dot, and both improved mightily from the previous two weekends.

After spending a lot of time in the box this season, the Minutemen only took one penalty on Friday, building on their second game against Providence less than a week prior, where they took two.

“We kind of exaggerate our hits and try to be really forceful,” Carvel said during the week before this weekend’s series. “I said let’s just tone it down a little bit, make sure we’re doing our hits but maybe not exaggerate as much on our extension.”

As for the faceoffs, UMass seemed to take a step back in that department against Boston University, and that continued in the series against Providence. After that, the Minutemen changed their midweek preparation.

“What we’re going to start doing is just doing a little extra pre-scout and see what other teams are doing,” Philip Lagunov said on Tuesday. “I think that’ll give us the edge.”

That proved to be a successful formula to get the UMass centers back on track, as they won 32 on their 55 faceoffs on Friday.

And in his third-straight start, Filip Lindberg showed why he was named a co-defensive player of the week in HEA. He stopped all 16 of the River Hawks’ shots on Friday, and has only let up one regulation goal over the last three games.

After dominating night one at the Mullins center, the Minutemen will have an extra wave of confidence when they travel to Lowell, where Carvel has not been able to win yet in his tenure with UMass.

“Very happy with the win, convincing win,“ Carvel said. “But we’re going to need to strap up and try to do it again tomorrow.”

Puck drop is set for 7 p.m. on Saturday.