UMass falls to Davidson 69-60 at home 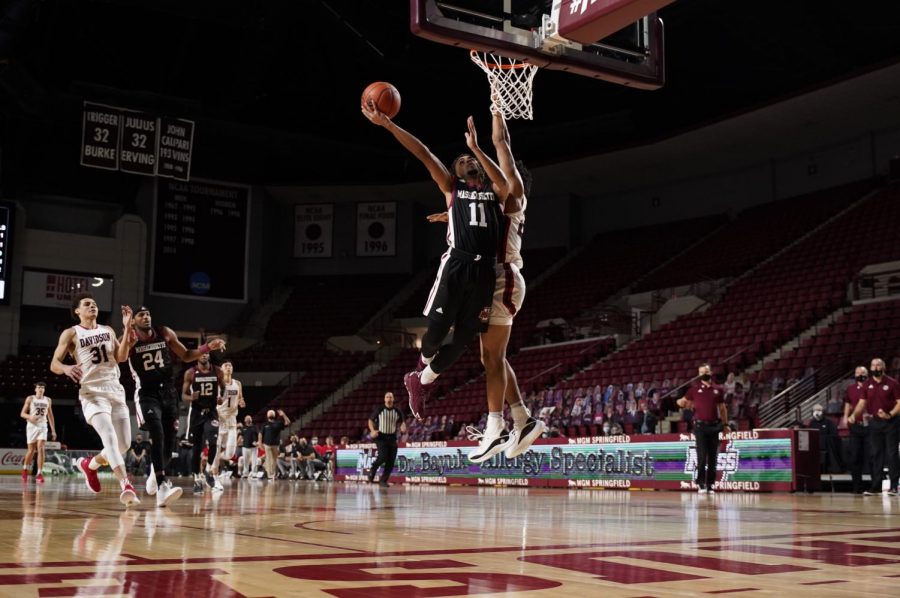 Davidson traveled to Amherst on Sunday afternoon for an Atlantic 10 showdown against the Massachusetts men’s basketball team, leaving with a 69-60 win against a team that was second in the A-10 standings.

Mitchell had already been dealing with a leg injury after a hard fall in the first half when he exited the game near the end of the second half with a shoulder injury. The sophomore center was in the paint going up for a rebound when his right shoulder went into Grady’s back, instantly causing him pain. The details and severity of the injury are still unknown.

The Minutemen led the Wildcats 32-27 at the end of the first half. Davidson then outscored UMass 42-28 in the second half, continuing a common theme for the Minutemen.

UMass is now outscoring all of its opponents 158-94 in the first half of games but is being outscored 130-152 in the second half of its games.

The Minutemen came into this game wanting to disrupt the Wildcat’s 3-point shooting, which was done successfully in the first half. Davidson shot only 2-10 from the arc in the first half, but Grady helped right the ship for the Wildcats, as he shot 3-3 from deep in the second half.

“We were playing pretty good defense, and one of the best guards in the league made some difficult shots… when the game was one or two possessions,” said UMass coach Matt McCall. “You got to tip your hat to some of the shots he made.”

Noah Fernandes continues to prove his value in his first season for the Minutemen, totaling 15 points along with five rebounds and two steals. His game was highlighted early in the second half, when he was able to create two consecutive and-one fouls, making both of his free throws.

Mitchell ended the first half with 12 points but was only able to score four in the second half. Davidson head coach Bob McKillop used differentiating defensive looks to confuse UMass, and specifically Mitchell.

Davidson’s Nelson Boachie-Yiadom was also able to hold his own in in the post when guarding Mitchell. Mitchell has tended to find ease in taking advantage of one-on-one matchups down low, but the combination of Boachie-Yiadom’s impressive athleticism and Mitchell’s lingering leg injury slowed the sophomore standout down in the final half of Sunday’s game.

“He obviously had an impact on the game,” McCall said of Boachie-Yiadom. “They’ve got multiple guys with tremendous size that can guard in the front court.

The different looks that McKillop showed proved to be quite effective, holding a Minutemen team that is second in the conference in scoring (80.2 per game) to a season-low 60 points. The Wildcats also held UMass to only 16 free throw attempts, a category that the Minutemen lead the country on average by attempting 27.2 per game.

UMass is on the road against Virginia Commonwealth this Wednesday at 7 p.m., while Davidson will host St. Bonaventure at 2 p.m. next Saturday.