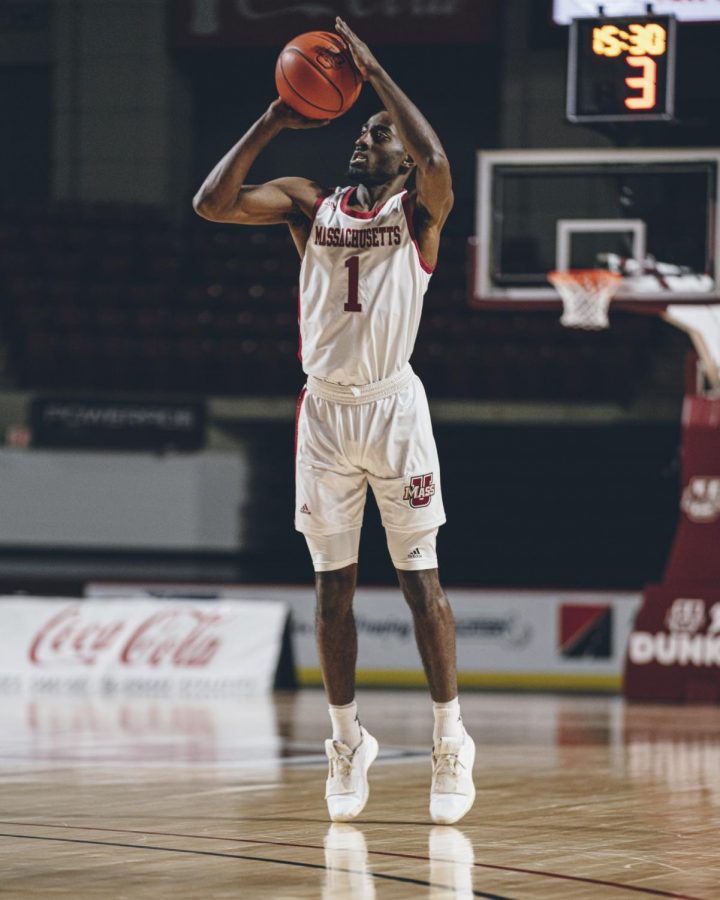 Tre Mitchell makes both of his free throws with less than 30 seconds left to put the Massachusetts men’s basketball team up one against Rhode Island.

This can be said about both Wednesday night’s game and the final game of the 2019-2020 regular season, where both teams faced off in Amherst.

Point guard Fatts Russell takes the ball coast to coast, but this time the outcome is different.

Unlike last year — when Russell was fouled and hit the go-ahead free throws to seal the game for URI (6-7, 3-3 Atlantic 10)  – Russell was double-teamed, forcing him to pass the ball to an open Antwan Walker.

Walker had a wide-open lane to the basket as the Rams were down two, but missed the tying layup that would have forced a second overtime.

Similar to last year’s first game, a scuffle broke out directly after the final buzzer. Though not nearly as serious as last season’s, the rivalry is real between the two A-10 schools.

Freshman Ronnie DeGray III led the way for the Minutemen (4-3, 3-1 A-10), totaling a career-high 21 points on 7-of-9 shooting from the field, along with six rebounds, three assists and two steals.

Tre Mitchell and Carl Pierre contributed with 16 and 15 points apiece. Mitchell also had four fouls with 7:54 seconds left in regulation, forcing him to sit for an extended period of time.

Makhel Mitchell paced URI Wednesday night with a career-high of his own, totaling 23 points in 34 minutes. Russell was the Rams’ second highest scorer with 12, though it came on an inefficient 13 shot attempts.

UMass was up nine points when T. Mitchell was subbed out, as the Minutemen led the Rams 61-52.

URI was down as much as 15 points with 9:23 left in the second half but was yet another team that was able to rally late against UMass, eventually tying the game with 15 seconds off an open three-pointer from Allen Betrand.

Scoring remained stagnant for the initial three minutes of overtime but was then back and forth all the way down to the missed open layup from Walker as the buzzer sounded off.

“Didn’t we talk about how we’re the most unlucky team in the country,” McCall jokingly asked. “I think that stat kind of shifted a little bit today”

“I wanted the ball out of [Russell’s] hands”

UMass shot 40 percent from the field and a meager 20 percent from three. In fact, the Rams had shot nine less threes than the Minutemen yet were still able to cash in on three more.

McCall detailed the importance of free throw shooting coming into this game, as both teams are at or near the top of the nation in attempts per game. Attempts for each team were only three apart, but the percent that each team shot them at were drastically different.

The Minutemen shot their 24 free throws at an 83 percent clip, making 20.

URI attempted 21 free throws, but only made 11, which is a 52.4 percent mark, far below its season average of 68 percent.

T. Mitchell logged 30 minutes for the second straight game, though this time was due to foul trouble. Through the first five games of the season, Mitchell averaged 36.2 minutes.

Time has opened up on the floor for lineups where DeGray III is moved to center and Dibaji Walker would take hold of the four spot. More time with Mitchell off the floor also means having to put more thought into how to create offense when your best offensive player is catching his breath.

“The floor has to move, the ball has to move,” McCall said of his offense sans Mitchell. “Multiple guys have to touch [the ball] and when that happens, we’ll get wide open shots, or we’ll get layups. I thought we got away from that during that stretch when they came back.”

Freshmen Cairo McCrory and Dyondre Dominguez were ruled out just over an hour before Wednesday night’s game, the reasons of which have yet to be announced.

“Due to federal educational rights protecting the privacy of all student-athletes at the university, Coach McCall and anyone else in the program are not able to share information related to their status at this time,” was the statement released to media members from the UMass Athletics department.

The next game for UMass will be Sunday afternoon at 2:30 p.m., traveling to Fordham to continue its A-10 schedule.