UMass killed all five power plays it faced on Friday 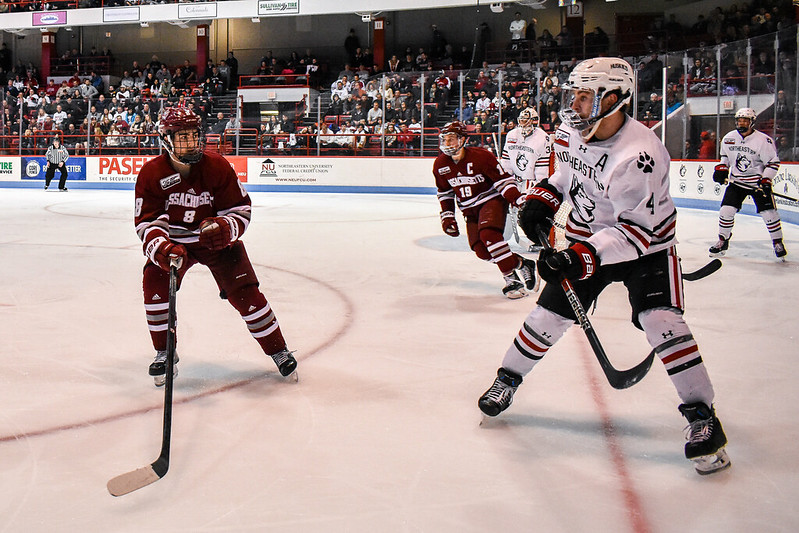 What happens when an unstoppable force meets an immovable object?

Well, Friday night’s matchup between the No. 9 Massachusetts hockey team and the No. 13 Northeastern Huskies answered that question.

The Huskies (3-2-2, 3-2-2 Hockey East) came into the contest with the second-best power play unit in the country—scoring on 32.3 percent of their chances. UMass (7-3-1, 7-3-1 HEA) on the other hand boasted one of the country’s top penalty killing units—fifth-best in college hockey.

It was the Minuteman penalty killing unit that won the battle of special team units, killing all five of Northeastern’s man advantage chances to propel UMass to the eventual 4-3 win.

“They’ve got a really nice power play. I think we got a little bit lucky tonight,” Minuteman head coach Greg Carvel said. “But our penalty kill continues to be absolutely critical in the way we’re finding ways to win.”

Facing such a dangerous penalty kill in the Huskies, the Minutemen did themselves no favors, committing five penalties over the course of the evening.

“We gave them way too many opportunities,” Carvel said. “There were a lot of power plays in the game. Both teams took a lot of penalties.”

While UMass’ penalty kill came away from the night with a perfect kill percentage intact, it was inches from being a different story.

On the opening draw of the second period, an Oliver Chau trip sent Northeastern to the man advantage. Midway through the kill, Huskie freshman Gunnarwolfe Fontaine fired a slap shot off the post that careened away from the goal, proving a pivotal miss in an eventual one-goal loss.

While it was the closest Northeastern came to a breakthrough on the man advantage, the night wasn’t without strong play from the unit. For long stretches of Huskies’ power plays, the usually stout Minuteman penalty kill found themselves on the back foot.

“They moved the puck around real well,” Carvel said of his opponent’s power play. “They’re patient. Then they’ve got such good skill level. They’ve got guys that can really bomb the puck too.”

The second period on the whole was a test for UMass’ penalty killers who had to be called upon four different times. On top of the near goal by Fontaine to start the frame, the Huskies power play controlled play for much of their time on the ice. Despite not netting a goal, Northeastern used the special teams-heavy second period to outshoot the high-shot-volume Minutemen, even though it was UMass that netted the period’s only goal.

Even with the skill of Northeastern, UMass still managed to extend its streak of successful penalties kills to 18—stretching back over three-plus games, with the last power play goal allowed coming Dec. 20 to Vermont.

On the back of the Minutemen’s success on the penalty kill has been Matt Murray. The senior netminder has now started seven-straight games and sports a 6-1-0 record across the stretch.

“I thought our team played a great road game,” Carvel said following the game. “Its hard to win here at Northeastern.”

The unstoppable force and immovable object will face off again Saturday night with UMass looking to complete the weekend sweep of Northeastern and extend its streak on the penalty kill. Puck drop is set for 6 p.m. in Amherst.