UMass will look to extend its win streak against Providence

The Minutemen have not lost a game in 37 days 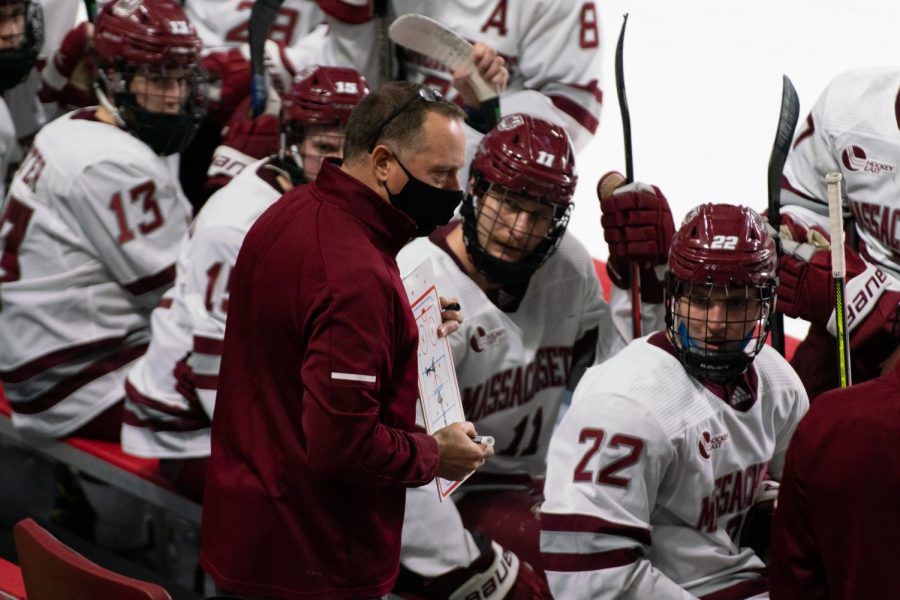 The Massachusetts hockey team will travel to Rhode Island on Wednesday, riding a seven-game win streak that it hopes to extend against Providence.

The Minutemen come into the matchup red hot, having not lost a game in over a month. They split their doubleheader against Merrimack, which brought them down to 2-3-1 for the season. After that weekend, UMass flipped a switch.

“That game at Merrimack on the road was kind of an eye opener for us,” coach Greg Carvel said. “Then we had a weekend off and it really allowed us to not just reset but to get the team to start to understand what our identity needs to be. I don’t think this group had figured it out.”

Fast forward to 37 days later, and UMass has put the pieces together and become a dominant team in almost every facet of the game.

The biggest surprise so far has been offensive efficiency. In a season where they were expected to have to win games 3-2, the Minutemen have scored at least four goals in all seven games of their winning streak.

UMass has been a score by committee team, but four players have stood out in terms of production in the o-zone: Bobby Trivigno, Carson Gicewicz, Matthew Kessel and Zac Jones.

Jones and Kessel are also an integral part of the Minutemen backend, which has been equally as dominant as their offense over the seven-game stretch. They are averaging just two goals per game, making them the No. 1 scoring defense in the Hockey East.

That unit is led by Marc Del Gaizo and Colin Felix, the top defensive pairing for UMass. Del Gaizo’s +12 plus-minus leads HEA, with Felix in second place at +10.

Another integral part of UMass’ defense has been goaltender Matt Murray. Murray has started in 11 of 13 games for the Minutemen and has a very solid 9-2 record in net this season. His .928 save percentage is second in the league, behind Boston College’s Spencer Knight.

UMass has also dominated special teams this year. Its power play has 17 goals on 62 attempts this year, and its penalty kill has been even more sound, with a .917 kill percentage. The improvement in odd man situations has been key for the Minutemen in their win streak.

UMass got a rare week-long break between its last game against New Hampshire and Wednesday’s clash with the Friars, which is a double-edged sword with all the momentum that the Minutemen have built up over the last few weeks.

“The positive is we had played a lot of games in a short number of days, so it was good to give the guys some rest,” Carvel said. “The negative is that you lost the edge.

UMass will have to find a way to keep its momentum going and keep its win streak intact, as it prepares for a top-20 matchup with Providence, followed by a weekend series against Boston University.

For the moment though, the Minutemen are only focused on the Friars, and the puck is set to drop for that game at 3:30 p.m. on Wednesday.