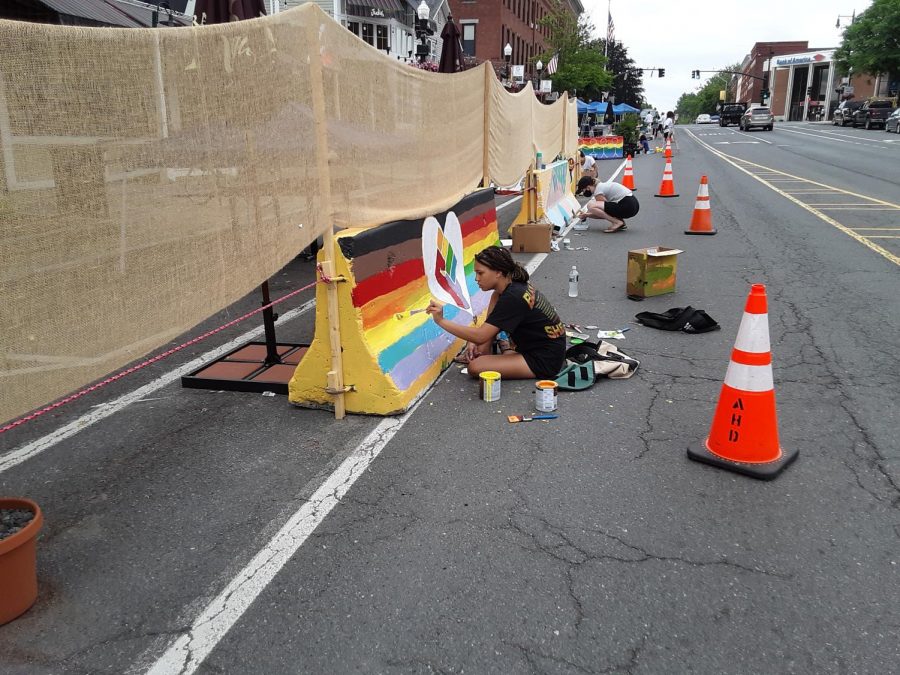 Yosola-Camille Dawodu and Nina Drummond are co-founders of The Black Room, a business that “builds and unifies the community through Black culture and art,” as explained on their Instagram page.

Over the summer, with the help of Dawodu’s mother, the young women had a business meeting to discuss how they could turn their artistic and managerial tendencies into a business opportunity.

“Over the summer, my mom and [Drummond] and I, and another one of our friend[s], Angela, we all had a business meeting together,” Dawodu said.

After that meeting, The Black Room was set into motion fairly quickly — “We [first] made our website, and we made an Instagram. And then I think a couple of days after that, the town of Amherst reached out to us and wanted us to paint two Jersey barriers, so those were our first, that was our first project, and it was over the summer,” recalls Dawodu.

Gabrielle Gould, executive director of the Amherst Downtown Business Improvement District, hired The Black Room as part of a project she initiated to beautify the town’s Jersey barriers. She called on artists of all backgrounds and worked to obtain a grant to be able to pay them for their work.

“We reached out to artists from all ages and all sorts of socioeconomic backgrounds, you know, it was literally a call to artists, it had nothing to do with anything other than ‘come and display your art!’” Gould said, noting that Dawodu and Drummond’s vision fit within her criteria well. The business partners heeded Gould’s call, and their art fit the criteria Gould encouraged: artwork that did not incite violence, hate speech or exclusivity.

“When Yosola called and said, ‘I want to do Black Lives Matter,’ I was like, ‘fantastic!’”

Drummond, who is in charge of the artistic side of The Black Room, led as they went to work on concepts. “A few days before [painting the barriers], we all came together, and we bought a poster board and started painting, and then we got the rough idea of what we’re doing,” she said. “And then I did a digital sketch of both of them. And then after that, it was only a few days worth of planning.” It took them a few hours to do the final paintings.

While Drummond busied herself with the designs for the projects, Dawodu was in charge of the logistics of the business, like managing their time and laying out plans. “[I have control over] time management, and just making sure that the projects are done on time, so I just make a format as to how things are done,” she said.

The Black Room was born out of a combined passion for social justice and art. Dawodu and Drummond hope to inspire a message not just for those passing through Amherst, but hope of a future filled with activism.

“Our message as The Black Room as a whole is to say that Black lives will always matter and to spread that within and around communities everywhere. And to know that we are all going to be seen, and we’re all going to be heard and treated as equals,” Dawodu said.

They chose art as their medium as it would help their message reach a larger audience, Dawodu explained: “We chose art because a lot of people will see it if it’s out in the open [when they’re] going through downtown Amherst; Many, many people [will] see that and see our message.”

Drummond also went into detail about the elements in her designs and how she used them to voice different sections of the Black community.

“The rainbow flag with the black power fist one, that one was mainly inspired by how we need to stand up for Black lives and LGBTQ+ lives,” she said.

As for the second barrier, she added, “The portrait of the lady with the afro and . . . the stuff over her mouth, and that was just saying that we’re being silenced but we’re trying to stop being silenced by putting our artwork everywhere.”

The team, however, does not limit themselves to art in order to support the Black Lives Matter movement. In August 2020, The Black Room used its resources to support a protest both financially and logistically; That month, Jacob Blake, a Black man from Kenosha, WI, was paralyzed after being shot by police.

“Angela Rivero, [an associate of The Black Room] had the idea of doing a protest in honor of Jacob Blake… she took a stand for him and decided to organize protests,” Dawodu said.

“I was like, “Hey, The Black Room should sponsor that!”….we helped her organize the protest and she ran [her] ideas by us,” she added. “We just helped her along the way.”

With The Black Room comes an opportunity to showcase a message the founders have long believed in. “We’ve all always had this passion, but this business gives us that outlet so we can share our passion with the rest of the world,” Drummond said. “We really plan on having more artwork and more pieces, especially in public areas.”

And their goals are not unfounded — Dawodu, Drummond and Gould have all noticed that the response to their art has been overwhelming. “The overall community response to this — and I mean like beyond our community — like Boston news has covered this — has been incredibly positive,” Gould said.

Once Dawodu and Drummond are out of school, Amherst can expect more of their art to pigment the town. For the time being, they don’t have many projects lined up due to their lack of free time and dedication to their academics. Nonetheless, they have constant support.

Gould believes in the power of Dawodu and Drummond’s mission.

“There is so much that these girls are going to learn and experience, but their life experience has already given them a platform and a voice, and I think it’s really important to encourage that and support that.”

The Black Room can be found on Instagram: @theblackroom2020.