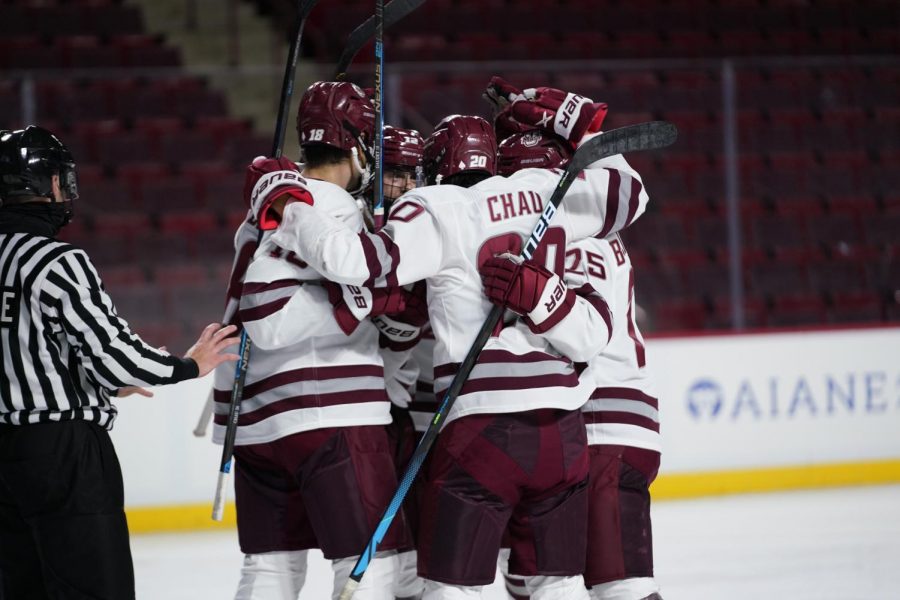 Tuesday night’s matchup between the Massachusetts hockey team and Providence saw UMass jump up 2-0 less than five minutes into the game, the Friars’ goaltender struggle and a lopsided final score of 8-1 in favor of the Minutemen. In a lot of ways, the contest looked a lot as one might expect a game between a ranked opponent and a team coming off a 24-day break might look.

Afterall, UMass head coach Greg Carvel said himself on Jan. 30, “It’s tough when you take time off. I complained when we hadn’t played for whatever that stretch was and I thought we lost our edge. So, it’s understood, that’s part of the pandemic but you still got to play the games.”

The only thing was it was the Minutemen who hadn’t taken the ice in a competitive capacity in nearly a month, not Providence.

“You don’t know how you’re going to respond when you have to go almost a month without a game,” Carvel said postgame. “As the game went on, I thought it was as well as we’d played all year.”

While the expectations might have been for UMass to come out of the gates rusty, for the red-hot Filip Lindberg to have lost his form or for the Minutemen to look out of shape as the game wore on, the exact opposites appeared to be the case.

UMass opened the game with a Carson Gicewicz goal just over three minutes after opening puck drop and added another less than a minute later thanks to Ty Farmer. Lindberg looked every bit as dominant as he had in the four games prior to the team’s pause, stopping 30 of 31 shots. The Minutemen even won the final frame 2-0, outscoring a Friar team who’s bread and butter had been third periods this season with a plus-12 mark in the frame coming into the contest.

Though the result may come as a surprise given the circumstances, it might not have been as shocking for members of the Minutemen.

“We’re kind of looking at it as an advantage,” Gicewicz said the Friday before the game. “Not every team gets a chance to rest, especially this time of year when you’re really making your push to make the playoffs. But we’ve been doing a good job of keeping ourselves busy and staying engaged.”

Gicewicz certainly looked like he stayed engaged as the graduate transfer scored the game’s first goal and added an assist later in the contest.

Confined to their rooms, Gicewicz and Co. had to find ways to stay in shape in the middle of their playoff push. With no access to the facilities for more than a week, that meant the Minutemen were without access to their Division I weight room. Rather, small college dorms and Amherst houses became the weight room, with the UMass strength and conditioning staff sending players bodyweight workouts that could be completed while adhering to the University’s self-sequester orders.

“I had a conversation with a couple coaches, and they gave me kind of in hindsight how they would’ve handled it,” Carvel said postgame, “and so we used that to our advantage.”

On top of staying physically in hockey shape, the Minutemen had to find ways to keep themselves sane considering their bedrooms—which were already doubling as classrooms with remote learning—had now been turned into make-shift gyms as well.

Rather than look at his same four walls, Gicewicz opted to go on long drives to clear his head.

“Guys have been doing different things,” Gicewicz said. “Personally, I like to go out and take some long drives, kind of listen to some music—It’s been a lot of podcasts, but besides that, a lot of country music for me.”

Whatever it was that UMass players used to occupy themselves during their time away from the ice, it seemed to have worked to perfection in avoiding the post-pause letdown against Providence.