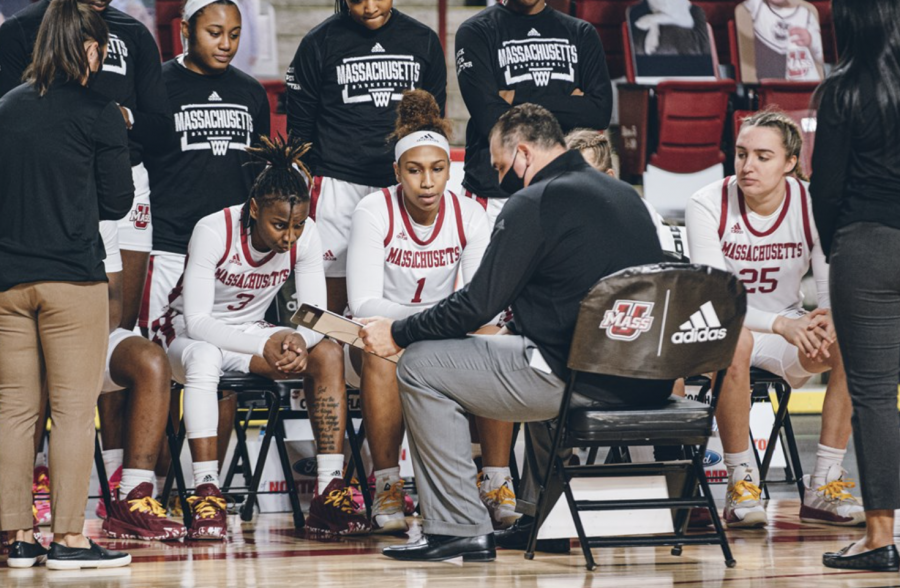 Coming off a three-week absence and playing in pink uniforms in Rhode Island for a pseudo-home game, this was anything but a normal contest for the Massachusetts women’s basketball team. That lack of normalcy was extended to the starting lineup, which changed for the first time all season.

“[Maddie] brings a ton of experience,” head coach Tory Verdi said of the Siena transfer. “She can do some things for offensively, as far as ripping and driving to the basket and so forth. We missed her a little bit here tonight.”

Donnelly, who was out with a concussion of her own earlier this season and was acclimating back to game speed ever since then, struggled to defend the paint in her first extended minutes. She flashed her 6-foot-9 wingspan on certain plays but lacked the consistent rim protection that Sims has provided all season long.

“This is Maeve’s first game, really, that she’s played some solid minutes,” Verdi said of the sophomore. “I’m looking forward to her getting better each and every single day.”

The Minutewomen missed more than just Sims’ defensive acumen, though. Offensively, she can make plays for others and create scoring opportunities from timely, well-positioned screens. Most importantly, she serves as a leader, communicator and veteran presence for a lineup that has just one other senior in Sam Breen.

“Rebounding, her talking and her leadership on the court really helps us, so we miss her a lot,” freshman guard Ber’nyah Mayo said of what she missed with Sims’ absence. “We hope to get her back as soon as possible.”

Mayo was able to make up for some of Sims’ absence tonight, especially at the offensive end. She scored a season-high 20 points, including shots from beyond the arc and some contested looks in the paint. Her finishing ability has been one of her strongest suits all season and that skill is still improving as the season goes along.

Now coming off a four-game losing streak, the Minutewomen will look to bounce back in their regular season finale against Richmond on Sunday. Given that she’s the only departing senior on the team, that game will be Maddie Sims day. Even though she will be supported in spirit on sideline, after watching tonight’s game, it’s clear that UMass needs her on the court, too.