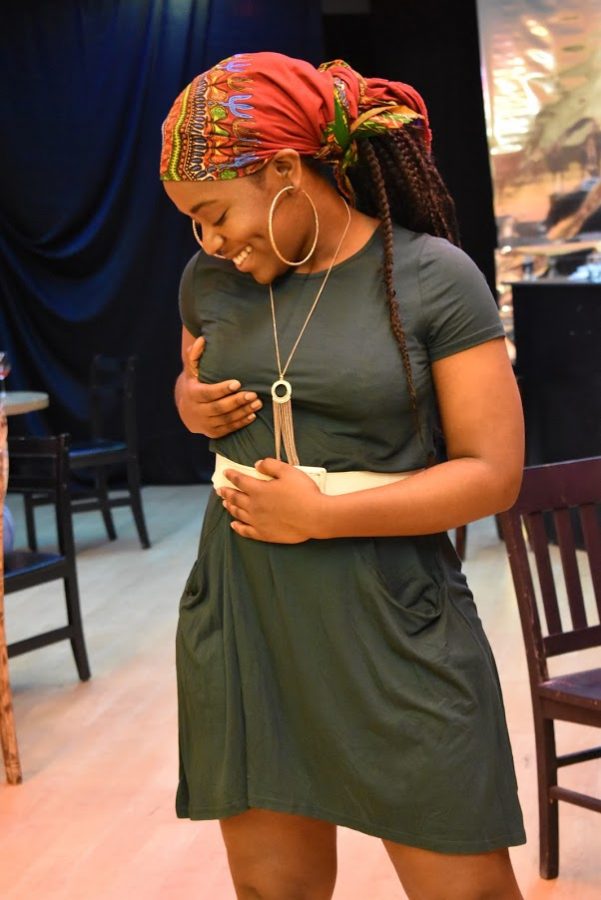 “I want to do something. I don’t know what, but I know that I’m an artist and I know that my art community needs to come together. We need to heal and we need time together.”

And Sabine Jacques found a way to do just that.

As the COVID-19 pandemic brought all in-person gatherings and events to a screeching halt last March, students began to look for alternative ways to come together. With coverage of the tragic deaths of George Floyd, Breonna Taylor, Ahmaud Arbery and Tony McDade flooding news outlets around the world, Jacques sought out to create an intimate space of community and support for Black students to come together and share various works of art, celebrating Black history, culture and talent.

“During that time…we were being inundated with images of Black death constantly, and just thinking about the history of how Blackness has been portrayed in the U.S. It’s been very derogatory and negative, and it’s been very harmful and violent,” Jacques said.

“And so I wanted to create a space where Black folks, my art family and friends could come together and really live in the beauty that is our Blackness and really begin to define what that means for us outside of societal understandings.”

Jacques, a masters student in international education at the University of Massachusetts, enlisted help from her friends Sandra Seoane-Serí and Afrikah Smith to lead the first installment of “My Blackness Is…” The mini webinar series ran from June 21to June 24 on Zoom, during which event attendees tuned in to watch a panel of Black artists present pieces of artwork that expressed what Blackness means to them. Each of the evening sessions concluded with a facilitated discussion led by the event’s co-creators.

Jacques emphasized her intentions in creating a space for Black artists and creatives to express themselves and reflect upon their history.

“When first putting [‘My Blackness Is…’] together, I wanted it to be a healing space for my art family,” Jacques said. “I wanted it to be a space where we laugh, cry, sing each other’s praises and intentionally think of ways to transform our societies and ourselves. That’s why I centered love, care and compassion. These are values that I wanted the artists to intentionally reflect upon and incorporate in their pieces. I wanted to use art as a means for expressing and healing.”

Several months later, some of the artists spoke about their experiences and involvement with “My Blackness Is…”, as well as the role that art continues to play in their lives.

Mary Elineema-Kidela, a senior operations and information management and communications double major, recalled when she got a call from Jacques asking if she would be interested in participating in the event – an opportunity which Elineema-Kidela saw as motivation to finish some pieces of poetry she had been writing at the time. She performed two poems, one titled “Strange Fruit,” which she had written in high school in memory of Trayvon Martin, and “Voice,” which she recited for the first time.

“Art, first and foremost, for me is healing. It’s revolutionary,” Elineema-Kidela said. “I think artists have a way of breaking grounds where no one else can. They have a way of portraying the issues that are actually happening in society. Performance art, specifically, is like a mirror toward society and it reflects whatever’s going on in our world, but it’s also a window to show opportunity in a world we create and we could be.”

Elineema-Kidela emphasized the role art has had since the onset of the COVID-19 pandemic, which left many people turning to their televisions to pass the time in quarantine.

“When the pandemic happened, what did everyone do? Everyone turned to Netflix to shows and movies. When the world shut down, people turned toward artists, which I think is very significant,” she said.

“I think [the Black Lives Matter movement] made me actually start writing poetry, to be completely honest. I think when I started becoming aware of Black Lives Matter, I was like, ‘Oh, I have a lot of s*** that I need to process,’ and poetry felt like a secret language.”

Reflecting upon “My Blackness Is…”, Darius Taylor, a doctoral student in the College of Education, said the event did “outstandingly well.” Taylor, who presented a prose piece and a scene, recalled the variety of art and the effectiveness of the platform, even in a virtual setting.

“There was fine art, there was dance, there was song, there was prose, there was poetry, there was dialogue, there were motivational speakers. I thought it was just a very eclectic bunch of Black creatives. [The virtual platform] had the reach that you need for such an empowering community.”

Taylor currently works as a research associate for a nonprofit organization, but still makes time for art when he’s not involved in quantitative analytics, academic research and grant writing.

“I believe that art is my way of expressing,” Taylor said. “I love the idea of tapping into the creative. I believe I have a lot of different gifts…and a lot of them are manifested through creativity. For me, art is freedom, art is liberty, art has no boundaries. It’s freely expressed…and a mechanism for liberation. It’s therapy.”

“For me, art is an opportunity to free myself from my research hat and my scholar hat and put on my creative hat. I really look forward to opportunities to express myself through art because it’s healing for me and transformative,” he continued.

Taylor performed in a lead role in the UMass Theater’s production of “The Bacchae of Euripides” in September 2019, which he considers to be one of his most transformative experiences as an artist yet.

“It was an opportunity for me not only to be a principal role, but also a dancer,” Taylor said. “I got to express a lot of different elements of my creative self, and I really enjoyed that it was a transformative experience for me.”

He also produced “Wrong Answer: Examining Stakeholder’s Voices in High Stakes Testing” which he presented in December 2019 at the New Africa House Theater. The production incorporated both his research and art-related interests, “[problematizing] high stakes testing in respect to Black Americans, and it was a call to action to the community to both engage in this idea that high stakes testing is right now an issue for most people of color, and an opportunity for the community to speak up about their solutions for high stakes challenges within those communities,” according to Taylor.

“Both of those pieces were pretty near and dear to my heart,” Taylor recalled.

“After the murder of George Floyd and Ahmaud Arbery, we just needed a place of healing…so I went through that and talked about my experience with my race,” Kwebiiha recounted.

While Kwebiiha’s theater studies are performance-based, she is interested in numerous other theatrical facets, such as spoken-word readings, lighting, design and other technical elements.

“Ultimately, I am in love with the story-telling aspect of it, and how through that storytelling and through those characters, different ideas can be sparked, and different points of views and conversations that are very much needed.”

Kwebiiha looks back fondly on times spent with her mother attending theater performances, particularly a showing of “Lion King” on Broadway when she was in high school. She credits such experiences for her original interests in theater and her inspirations behind becoming an “art activist.”

“I love that art can be such a central place for activism and has been for so long,” Kwebiiha said. “I’m looking into using art as a form of social transformation, and becoming more of an art activist and a performance activist is something that I’m moving toward.”

Just like the artists featured at the event, art plays a significant role in Jacques’ life.

“Art is huge in my life,” Jacques said. “For me, art is self-definition, self-authorship… a way for me to look at myself and look at my Blackness, look at my ‘womanness’ and define what that is for me and find art that speaks to that for me, as well.”

“It helps me engage in that self-authorship, and reminds me that I am a sovereign being…and I get to choose how I want to define myself and what form I want to find myself. Art allows me to feel expansive. I don’t know where I’d be without my art and my art family.”

Jacques expresses her art in the theater and enjoys using the stage to share Black stories and educate others about Black history.

“When I think of art, I immediately go to acting on a stage and thinking about theater,” Jacques said. “I know I’m an actress and I can kill a monologue, and I make sure that whatever work I am doing speaks to resistance, wanting to transform beings or bringing light to true and real history, Black history, Black stories, Black life.”

When asked about the inspirations behind her art, Jacques not only credited the support of her art family, but the Black Lives Matter movement, as well.

“The Black Lives Matter movement has played a huge role, especially thinking about it being started and founded by three Black women who wanted to proclaim that our lives matter. And so for me, proclaiming that our lives matter is also being able to engage in defining what our life is and who we truly are outside of these stereotypes and these tropes and these negative messages that a lot of us have been internalized to,” Jacques said.

“That’s what Black Lives Matter is – we’re proclaiming that Black lives matter too, we have always mattered. And for me… ‘My Blackness Is…’ is a way of showing how our lives matter,” Jacques added.

“My Blackness Is…” received resounding positive feedback, as the artists expressed their gratitude and appreciation for the welcoming environment which the space created, as well as the opportunity for artists to share and celebrate their personal definitions of Blackness and what Blackness means to them.

Kwebiiha particularly enjoyed the variety of art that was shared during the event, and the inviting space in which the artists were celebrated.

“I think the best part about Blackness is… that anything can be welcomed into the space when it comes to Black art, Black history,” Kwebiiha said. “I was so happy to see not only for myself, but for others around me, to have a safe space…where we could be vulnerable and open and just expressive in any way we wanted.”

“I’m just thankful to [Jacques] and all her co-creators for creating a space like “My Blackness Is…” Elineema-Kidela added. “I think it’s very important in our time especially, not only for Black artists, but for anyone who’s willing to tune in… I’m very grateful for that.”

Taylor echoed both Kwebiiha’s and Elineema-Kidela’s sentiments, adding, “I think [Jacques], [Seoane-Serí] and [Smith] did an excellent job at really bringing a community together at a time when we’re forced to be inside because of [COVID-19] restrictions.”

“My experiences throughout my life that relate to my Blackness influence my art,” Taylor said. “My lived experiences, my experiences in the systems of society – they all channel into my art expression. And I’m grateful for who I am because it’s allowed for me to produce art that’s provocative and evocative.”

Although Jacques is currently finishing her last semester at UMass, she plans to continue creating similar spaces for Black artists as she pursues a career in acting.

Regardless of what the spaces may look like, Jacques says, “[They] will always be grounded in love for Black folks, and care and compassion and wanting to think about how we transform our world…and ourselves.”