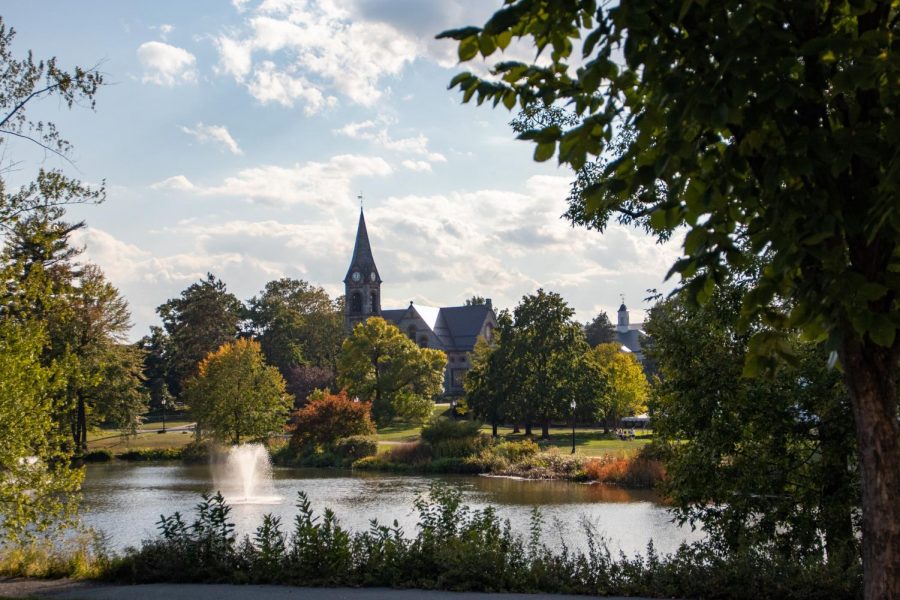 The Commonwealth Honors College of the University of Massachusetts held its annual Black Heritage Month eventMonday evening, titled “The Arts as a Praxis of Liberation: Embodying Change and Transformation in a Time of Racial Justice.”

Jamila Lyiscott, assistant professor of social justice education, and Juana Valdés, associate professor in printmaking, were panelists for the event with theater professor Judyie Al-Bilali as the moderator.

“There has never been a better time to be an artist. Where we are right now is so exciting and so robust,” Al-Bilali said. “We were on the margin, and we are now the center. We have the skills as artists that everybody is looking for. We know how to collaborate; we are comfortable with not knowing.”

The event showcased the spoken-word poem “2053” by Lyiscott and various artworks by Valdés, who uses printmaking, photography, sculptures, ceramics and site-specific installations to explore issues of race, transnationalism, gender, labor and class. The panelists’ presentations were followed by a lively discussion about the intersection of art and activism, which were followed by a Q&A session.

The speakers, including Al-Bilali, stressed the importance of continuing the conversations about racial justice and activism at UMass beyond this annual event.

During her presentation, Lyiscott began by emphasizing her understanding of language as a “site of political struggle,” highlighting its significance during historical events like the slave trade and Africa’s colonization. She said her poem “2053” embodies the journey she has taken “to use spoken word poetry as an avenue for evoking the histories, the legacies, the cultural practices, the ethos of [her] people in a way that is meant to disrupt systemic racism.” Below is an excerpt from the poem, which she wrote in response to the 2016 presidential inauguration.

Believing in the possibility of a more perfect union

We juxtaposed our journey with a history of healing”

“The spoken word poem was speaking back to a reality that is rooted in anti-blackness,” said Lyiscott. “One of the things that became really important to me was the power of authorship and authority over the kinds of histories and futures that we get to inscribe when we name the future we are envisioning.”

During her presentation, Valdés spoke about how she uses different materials to explore issues of race and gender. Her most recent work, “Rest Ashore,” was one of five exhibited at the event. “Rest Ashore” reexamines the Cuban migration experience over the past 60 years and how it relates to the current global refugee crisis.

The large-scale, multi-channel video installation draws similarities to how the refugee crisis has been documented and disseminated in mass media throughout the years. It also creates a new visual vernacular honoring those who died at sea in their travels, according to Valdés.

“I do not use the body very often within the work. The work actually brings in objects from everyday experience as a substitute for the body,” said Valdés. “Absence of the body also speaks about what is happening to those bodies. The work functions as an archive and evokes migration as a complex process that involves both the home space of the diasporic community as well as their new homeland.”

The event’s Q&A section sparked conversations about the intersection of art and activism, and notions about freedom and healing. The panelists were asked what the necessary elements were for a piece of artwork to become a social tool that can heal, celebrate and transform. Valdés said the most significant component of her work is allowing multiple people to see themselves within her work.

“When people come to the work, it is the grandma that looks at it. It is the kid that recognizes the toy that they left behind. It is the adult that sees the cup that may be using,” she said. “Healing begins with being able to accept yourself and find yourself and see yourself contributing.”

When the panelists were asked how they ground themselves, Lyiscott emphasized the importance of self-care and self-love. “There is something so radical and powerful about caring for myself in a world that tries to render me invisible or disposable.”

“It is a form of resistance. It changes how I show up for people who look like me, because when we show up in the midst of the brokenness or [being] trapped in those narratives, we limit the possibilities for people who are witnessing us in the world,” she said. “To me, that is an important part of my liberation works, being my highest and most-well self as an act of freedom.”

Konah Brownell can be reached at [email protected]