The Trivigno, Wait, Lopina trio continues to gel in overtime victory over BC

“Those guys are easily our best line” 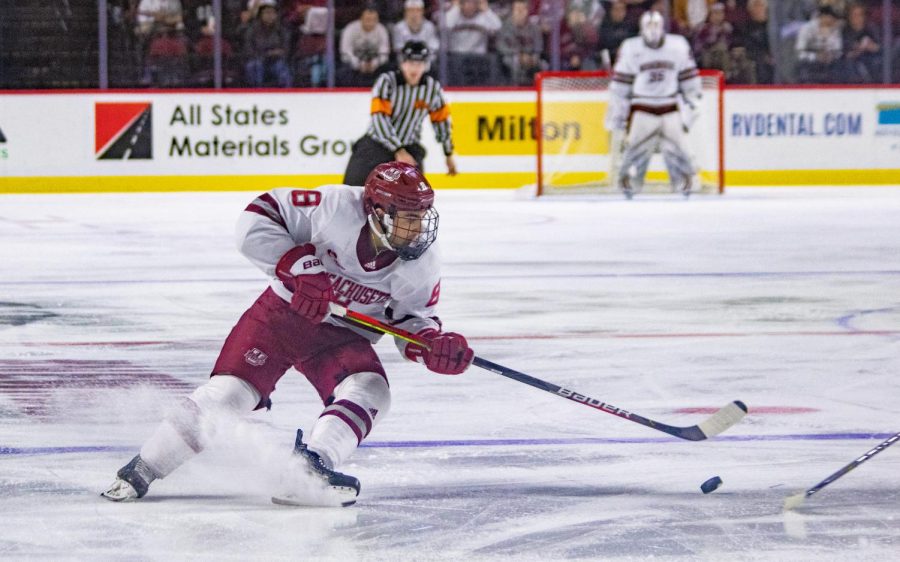 Despite being listed as the second line on the Massachusetts hockey team’s roster, the trio of Bobby Trivigno, Josh Lopina and Garrett Wait has been second to none so far this season.

In Friday night’s overtime win against No. 1 Boston College, No. 9 UMass coach Greg Carvel often lined up the second unit against the Eagles’ top line to take crucial faceoffs, and they once again delivered.

The sequence immediately after BC (15-4-1, 15-4-1 Hockey East) took a 2-0 lead in the second period captured everything the line has brought to the table all year long. Lopina won a faceoff forward to Wait, who carried the puck forward before dishing it to Trivigno in the slot, killing the Eagles’ momentum and answering with a goal just eight seconds after the Minutemen (13-5-3, 13-5-3 HEA) gave one up.

Here’s a look at @bobbytrivigno’s eighth of the season, set up by @Gwait17 and @josh_lopina

The assist extended Wait’s point streak to five straight games (he has nine points during that stretch 🔥)#NewMass | #Flagship 🚩 pic.twitter.com/sTEL6yC1Vq

“That was huge, I don’t know if we’ve had as big a goal as far as timing,” Carvel said after the game. “They scored two, and then to score one less than 10 seconds after, that was absolutely huge.”

Since the beginning of the season, Lopina has been asked to take the important draws on the powerplay, penalty kill, as well as late in the third period and overtime. And he consistently answers the call, winning 12 of his 21 faceoffs on Friday.

Outside of the faceoff dot, Lopina has taken an active role in the offensive zone. He doesn’t shy away from the dirty spots in front of the crease, leading to his seven goals and 10 assists on the season.

“He’s smart and he competes,” Carvel said. “He’s not intimidated, he’s not afraid of any situation, he’s got confidence and he’s got a strong skill set.”

Wait has been a factor in the offensive zone as well. The junior transfer has 15 points in his first year with UMass, on seven goals and eight assists. And this week alone he found the back of the net twice and totaled five points.

“He’s a very good player,” Trivigno said of his line mate. “I love playing with him, I think he plays very hard, he’s a smart player.”

And Wait’s connection to his opposite winger stretches back even before their time in Amherst. He and Trivigno were teammates in the USHL before they parted ways, Wait going to play for Minnesota and Trivigno coming to Massachusetts.

“Garrett Wait is here largely because of Bobby Trivigno,” Carvel said. “When Garrett decided to leave [Minnesota], Bobby convinced him that this is a good place to play and told him how he would be coached, how we run our program, and that’s what Garrett wanted.”

Trivigno has also played a large role in his freshman center’s development, helping Lopina become a better player and also grooming him to be a leader in the future.

“I put Lopina with him because Lopina is going to be a tremendous leader as well,” Carvel said. “I had a sense that Lopina would work to meet what [Trivigno] brings to the rink every night.”

Outside of his role as an assistant captain and mentor for the young line, Trivigno also happens to be one of the best Minutemen on the ice each and every game. His 24 points lead all UMass skaters.

The trio has constantly produced as a unit since they were grouped together early in the season and have earned a high level of praise from Carvel, despite being the second unit.

“Those guys are easily our best line.”