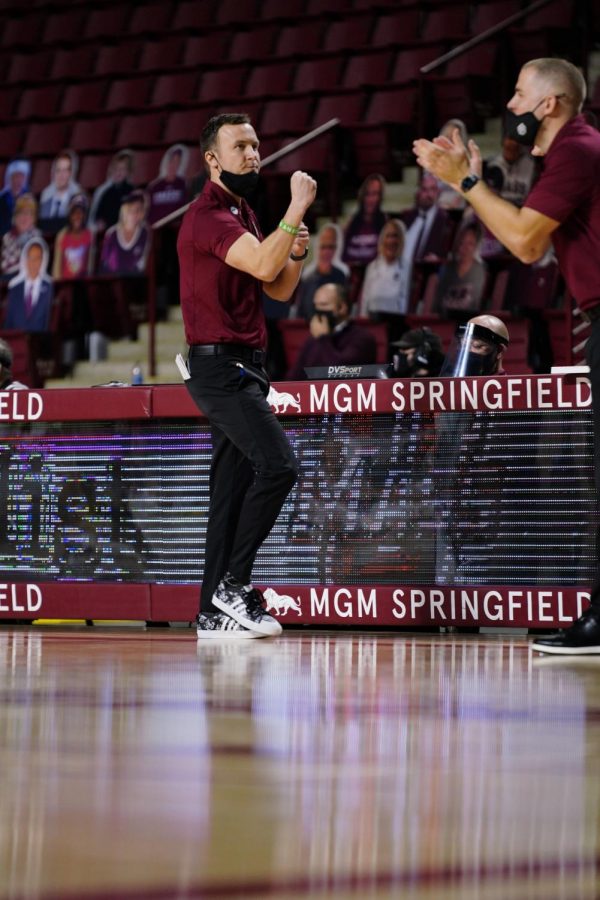 Even with Tre Mitchell and Noah Fernandes out for Wednesday’s game, the Massachusetts men’s basketball team was able to defeat Fordham 60-54 at home.

The Rams (1-9, 1-9 Atlantic 10) were likely the best possible team for the Minutemen to lose arguably their two most impactful players. Fordham has been struggling all year long, even firing its former head coach in Jeffrey Neubauer just a few weeks ago.

Ronnie DeGray III was also on a minute restriction Wednesday night due to COVID-19 safety precautions. DeGray III averaged 30 minutes a game and had started all nine games prior to the second matchup against Fordham. Head coach Matt McCall gave DeGray III the choice to play or not, as he was quarantined since the Davidson game on Jan. 24.

“He wanted to play,” McCall said. “…Obviously every time he’s on the bench I wanted to get him back in there because he’s that valuable to our team. But understanding he hasn’t done much and the last thing I wanted him to do was to get hurt.”

The trio of Mitchell, Fernandes and DeGray III also happen to be the top three rebounders for UMass (16.3 per game combined, or 45 percent of the total team average). This left room for opportunity; which TJ Weeks took full advantage of.

Weeks not only led the Minutemen in rebounds with 12, but also tied the team high in assists (5).

Mark Gasperini also got his first start of the season with no Mitchell. He finished with nine points, five rebounds, four steals and a block in 31 minutes.

“I’m not Tre Mitchell,” Gasperini said. “…I knew it would be a challenge because I haven’t played big minutes this year, but I knew I was capable…I probably need like a wheelchair tomorrow.”

Josh Navarro and Joel Soriano led the way for the Rams, as Navarro totaled 17 points and Soriano had a double-double with 12 points and 13 rebounds.

Fordham was held to 21.4 percent from beyond the arc and also didn’t make the most of its free throw opportunities, making only 7-of-14.

This gave leeway to UMass’ top three shot-takers to struggle. Carl Pierre, Javohn Garcia and Weeks combined for 13-42 from field and 6-28 from three but were still able to hold out for a win.

Garcia led the way defensively for the Minutemen, totaling three steals and two blocks in the lead point guard role in place of Fernandes.

Fernandes and Mitchell are both questionable for Saturday’s game against Rhode Island. Mitchell is dealing with a right shoulder injury that he suffered going for a rebound against Davidson. Fernandes injured his right wrist in the same game after he hit the floor after converting two consecutive and-ones.

“That’s tough for your primary ballhandler,” McCall said of Fernandes’ wrist injury. “And then Tre is starting to get some good range of motion, but then again… because of how physical teams guard him, when he gets hit or takes that first shot on that shoulder how is he going to respond?”

Though UMass was left without two of its most valuable players, the return of guards such as Kolton Mitchell (concussion) and Cairo McCrory (unknown) gave the Minutemen eight active scholarship players, rather than six that includes DeGray III on a minute restriction.

McCrory totaled 18 minutes while K. Mitchell totaled 10, neither of them making much noise in their return to the hardwood.

The next game for UMass will be a more challenging matchup in Kingston against A-10 rival Rhode Island on Saturday at 8 p.m.