UMass gets set to take on BC Friday night

The Eagles swept the Minutemen earlier in the season 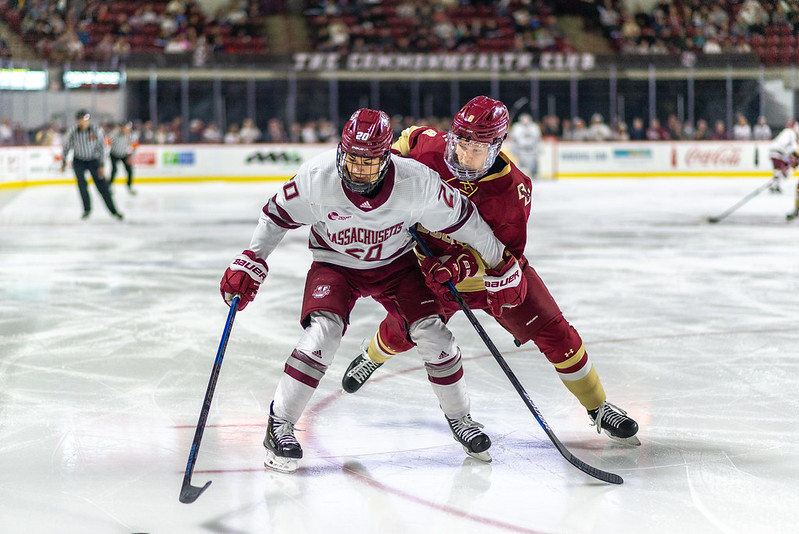 Times were different when Boston College and the Massachusetts hockey team faced off for the first time this season.

For the Eagles, it was their first two games of the season. The Minutemen had already played two games prior.

When the two teams meet again Friday night at Conte Forum in Chestnut Hill, things are sure to be different.

“It’s a really good challenge for us,” UMass bench boss Greg Carvel said Thursday of playing the Eagles Friday night. “I think we’re a much different team than what we were when we played them.”

While BC didn’t have NHL first-round pick Alex Newhook for its dances with the Minutemen in late November, UMass was without the services of top defenseman Marc Del Gaizo.

“That was a big, huge factor in that game,” Carvel said of not having Del Gaizo back then. “Not many kids in this league that when you take one kid out of a lineup, it makes that big of a difference. I think Marc Del Gaizo does that for our team.”

It’s no surprise Carvel and co. are ecstatic to have Del Gaizo’s smooth skating, puck-moving abilities and defensive prowess this time around against the No. 1 team in the country.

The only person more excited to have Del Gaizo back against the Eagles is, well, the man himself.

“We got swept by them earlier in the year, I know the guys in the room and our team aren’t very happy about that and it’s going to be a big statement game for either team heading into the playoffs and heading down the stretch and going into NCAAs. Hopefully we can take one from them Friday night,” Del Gaizo said Wednesday.

He’ll certainly be busy. The same can be said for his partner, Colin Felix. The duo acts as Carvel’s defensive weapon to deploy against the opposition’s top lines. Against BC, that means neutralizing Newhook and Matt Boldy.

For the rest of the Minutemen defense – Zac Jones, Matthew Kessel, Ty Farmer and Aaron Bohlinger – it’ll be about fixing the mistakes that led to six Eagles goals last time the two teams took the ice.

“I’m going to use some of the goals that were scored against us in the pre-scout just again to help remind our guys of what BC is capable of doing, which is a fast-strike offense, which not many teams in college hockey have,” Carvel said. “BC does.”

While UMass boasts Bobby Trivigno, the leading point-getter in Hockey East with 23, Boldy and junior forward Marc McLaughlin are tied for third with 22 apiece. The BC attack is deep, with seven NHL draft picks.

But the two teams are closer in talent than they were back in November.

It’s a good time for the Minutemen’s identity to take shape. Where the regular season road ends and the Hockey East playoffs street is now in full sight. They just took down Providence, 8-1, on Tuesday. Now it’s BC.

How are they viewing these late-season games?

“Tuesday night’s game, we look at like a playoff game and this is just like a playoff game, too,” Carvel said. “We’re all fighting for position, especially home-ice throughout the playoffs being a big factor, so this is a huge game. Some games you’re worried about getting points and position, some games you’re worried about how you stack up. This is a game about where we stack up.”

And the excitement levels?

“This is as excited as I’ve been all year to go into a game and it’s probably the one place that’s the hardest place to win a game is BC,” Carvel said. “But I think our group will be excited and ready for the challenge.”