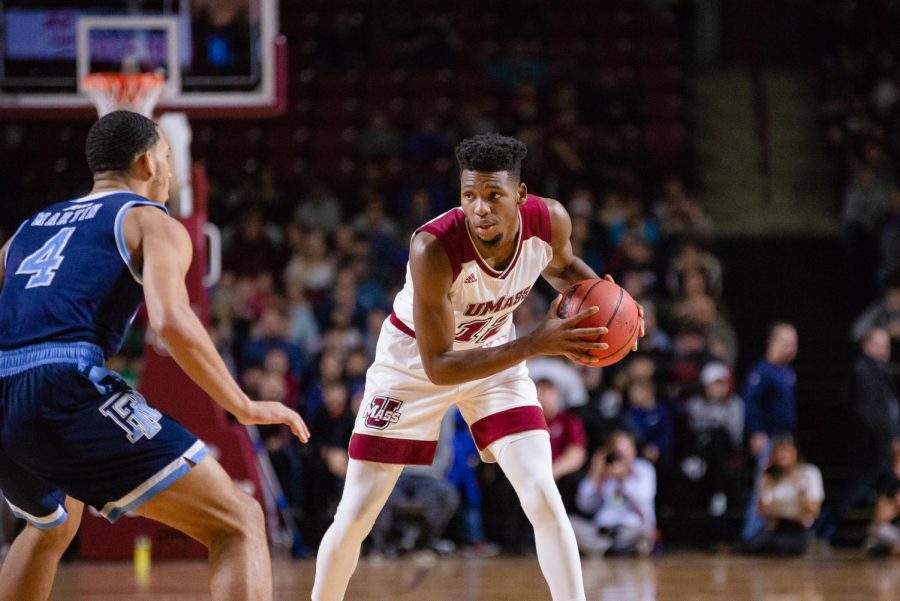 In commanding style on the road, the Massachusetts men’s basketball team beat Rhode Island 75-63 to sweep them for the first time since the 2013-2014 season.

Without their top two scorers on the season, the Minutemen (7-4, 6-2 Atlantic 10) went to battle with fellow New England rival’s URI (9-11, 6-7 A-10) in a nationally televised game on ESPN2. UMass grinded out a win without Tre Mitchell and Noah Fernandes for the second-straight game and found a way to get into rhythm without two of their biggest threats on the court.

“A really, really gutsy performance by our guys,” UMass coach Matt McCall said. “You got to give them a tremendous amount of credit. A lot of adversity in the game, and [they] didn’t flinch for a second. I think we’ve learned from some of our mistakes and some of our second half issues that we’ve had and really battled and found a way to get a huge win from top to bottom.”

UMass finished with four players in double digits, and it got some huge performances from players stepping up to fill the void of Mitchell and Fernandes being out. Mark Gasperini got a second-straight start, finishing with 11 points on 5-of-7 shooting from the field while also picking up five rebounds. Gasperini played quality minutes once again after a solid first career start in a UMass shirt last time out against Fordham. The big man was a key defender down low in the post and showed on multiple occasions that he has the footwork to work from box to box in the paint.

“Mark is a humble dude,” Pierre said. “He comes in every day, does what he needs to do, takes care of business and chips away. We all just want to see him succeed. Mark is just a great guy and he is an easy guy to root for.”

The captain, Carl Pierre, was a key contributor in the upset win against the Rams on the road. The senior finished with 19 points on 7-of-15 shooting from the field and also knocked down five 3s. It was a season high in threes made for Pierre who has consistently been able to make around three 3-pointer’s a game so far to date, but Saturday against URI he stepped up big when UMass needed him the most.

“This was a big win,” Pierre said. “Just to come in on the road shorthanded and get a road win in our conference is big. It doesn’t matter who you are playing. It’s a solid win.”

UMass was only up by five at the half. Thanks to the play from URI’s Antwan Walker, the Rams were able to keep within reaching distance of UMass. Walker had 14 at the half and went on to score 26 points to finish out the game. He accounted for just under a half of URI’s points in the first half and was on a tear racking up points in the paint against UMass. The first half was fast paced with neither side really forming an identity on offense nor getting into a rhythm.

Out of the gate in the second half the tempo clearly changed, and both sides were going back and forth trading baskets. Towards the middle of the second half at the 9:41 mark, UMass led 55-53 and the momentum of the game was really up for grabs by either team. After that point the Minutemen went on an 18-7 run up until the two-minute mark where the game was just about sealed.

The energy UMass played off of was felt throughout the game and that can be contributed to plays from Cairo McCrory and Ronnie DeGray. McCrory finished with three steals and 11 points and showed once again why he is an energy guy for this UMass team. His tenacious defending caused chaos to URI and a lot of disruption within their offense. Towards the latter end of the second half when Javohn Garcia went to the locker room after getting pocked in the eye, DeGray stepped up big and ran the offense multiple times proving why he is such a versatile player for McCall. He has been that glue guy for UMass and after stepping up big last time out against URI, the freshman came through again finishing with 11 points on 5-of-13 shooting.

It was a team effort for UMass who swept its regional rivals in the season series and are off to its best start in conference play since the 2006-2007 season.

UMass next takes on Dayton in Amherst Feb. 9 with tipoff scheduled for 7 p.m.