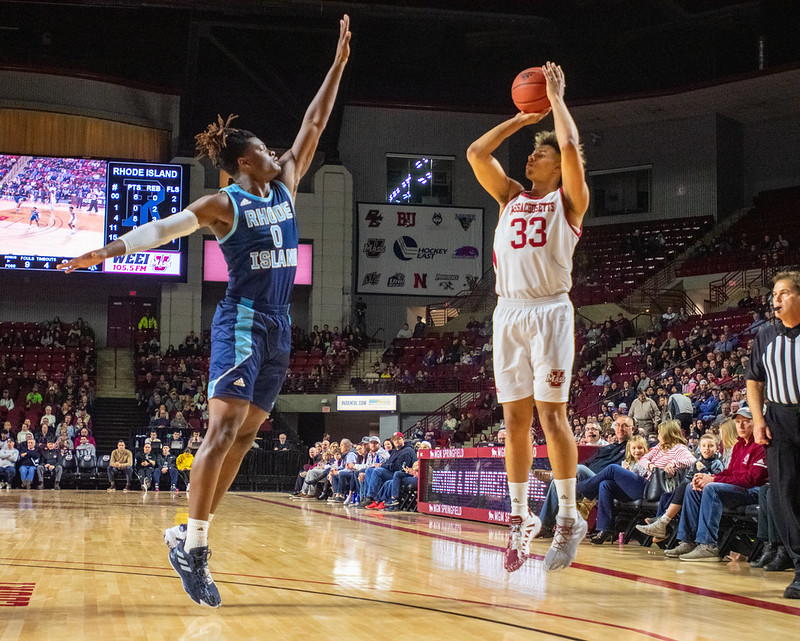 Since Jan. 13 – or the last time the Massachusetts men’s basketball team and Rhode Island faced off – UMass has had only three games, while URI has played double.

In a game where star big Tre Mitchell and primary ballhandler Noah Fernandes could both be unavailable, the Minutemen (6-4, 5-2 Atlantic 10) are up against a Rams (9-10, 6-6 A-10) squad that has key injuries of their own. URI’s leading scorer Fatts Russell has missed two of the last four games while dealing with an ankle injury and could very well miss Saturday’s game against UMass.

Freshman Ishmael Leggett has started those two games in place of Russell, scoring 12 and 17 points in the two games.

“For a freshman in the Atlantic 10 to be doing what he’s doing, it’s extremely impressive,” said Minutemen coach Matt McCall. “We got to do a good job on him, he’s shooting a decent percentage from behind the three-point line as well. He’s fully capable of running their team.”

When asked about Mitchell’s injury, McCall told media that, “He’s still got time before we can put him in.” This leads all signs to Mark Gasperini to make his second straight start for UMass.

Gasperini put up nine points, five rebounds and four steals in his first ever start for the Minutemen, leading McCall to trust his abilities to keep up with Makhel Mitchell, who scored 23 points in the first meeting against URI.

“I thought defensively versus Soriano that Mark was terrific,” McCall said about Gasperini’s performance guarding Fordham big-man Joel Soriano, who is averaging a double-double this season. “I have full confidence that Mark can guard (Mitchell).”

The last game saw a 15-point UMass lead with a tick over 10 minutes remaining dwindle as the Rams were able to tie the score up to send it to overtime, where the Minutemen eventually won.

“They made an adjustment and they played zone and we didn’t handle that very well the first time we played,” McCall said. “So we have to be prepared for that as well.”

McCall also feels the offense was stagnant for UMass down the stretch and says that his team will need a “high number of passes” in order to defeat URI.

Ronnie DeGray III was the leading scorer for the Minutemen in the last matchup, totaling a career-high 21 points. DeGray III is coming off of a game where he logged his season-low for minutes with 21 due to quarantining out of precaution for COVID-19, though he did not test positive. DeGray III doesn’t know if the minutes restriction will continue in Saturday night’s game.

UMass proved to be the superior team throughout the majority of the last game but allowed the Rams to climb back. This has proven itself as a similar theme this season for the Minutemen, who allow 10 more points in the second half on average in comparison to the first half (29.2 in comparison to 39.4).

UMass also saw Cairo McCrory and Dyondre Dominguez return from their absence due to unknown reasons Wednesday against Fordham. McCrory logged 18 minutes and added three points and two rebounds, while Dominguez did not see the floor. McCall did note that Dominguez had a “good practice” trending on the direction he could see minutes in the event both Mitchell and Fernandes are out.

Ironically enough, the first time this season that UMass is slated to play on ESPN2, it is without two of its top three players, all while URI could be losing its best player in Russell.

Tip-off is set for 8 p.m. at the Ryan Center on Saturday.