UMass women’s basketball is trying to keep busy during pause

“I think frustrated is like just the perfect word to encapsulate it,” Breen said 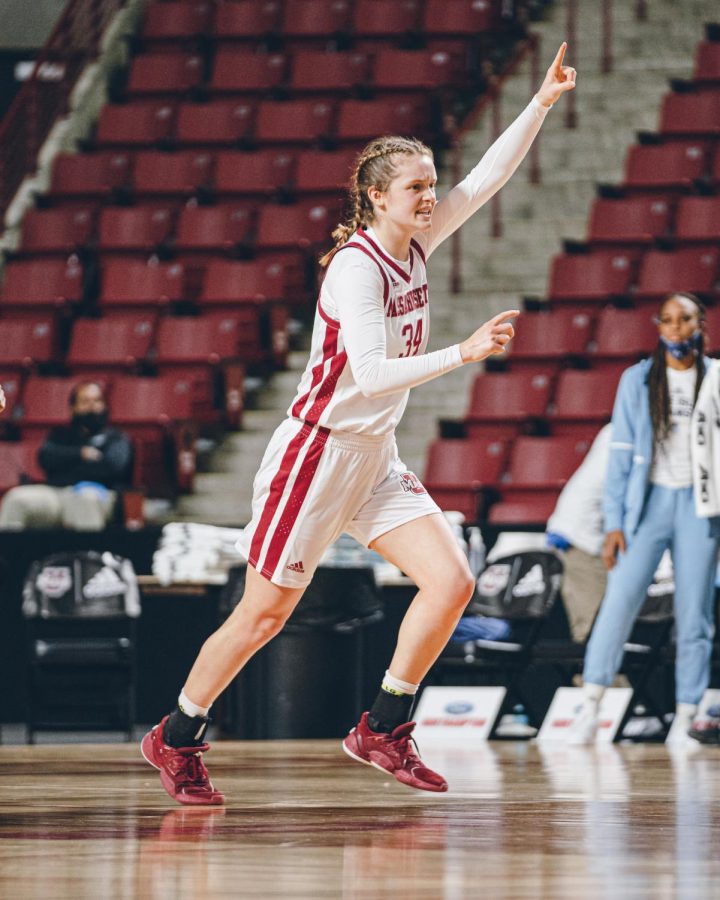 After waiting a full week to play, the Massachusetts women’s basketball team was preparing for a game against George Mason on Sunday.

While most UMass students rolled out of bed as the late morning turned into the early afternoon, the Minutewomen woke up early to prepare for their afternoon game.

As the snow fell and the sun began to rise, text messages rolled in. However, none of them said good luck or have a great game, instead it was just devastation.

“I think frustrated is like just the perfect word to encapsulate it,” Sam Breen said via Zoom Thursday morning. “Definitely was surprised because we’re supposed to have a game that day. To wake up for shoot around, and then get that news. It was definitely tough to swallow. But yeah, super frustrated.”

After an extreme spike in COVID-19 cases on campus, all athletics at UMass have been put on pause for at least two weeks.

Now, Breen and her teammates are “self-sequestering” along with the entire UMass student body. After months of taking extreme precautions to ensure players would be healthy enough to practice and play each day, the Minutewomen are now separated within their dorms.

As a captain, Breen has made sure to remain in close touch with her team during this somber time.

In addition to her roommates, an unlikely teammate has been Breen’s most valuable player throughout this break.

“This is turbo,” Breen said as a dog crept into the Zoom frame.” “He’s been with me since September. He has also definitely helped with this because he’s kept me sane, personally. I can take him out and at least let him out to go to the bathroom and stuff. And then I’ll play with him in our hallway, and stuff like that, just to give him exercise. But yeah, he’s kept me sane. Shoutout to him.”

Although Turbo has seen the Minutewomen succeed all season long, the pause came at an inopportune time. UMass found itself facing three-straight losses when they found out a positive case at George Washington would cancel that game. Given the extra practice time to prepare for George Mason, the Minutewomen were looking to get back in the winning column.

As of right now, there are just two games left on the schedule when the pause is over before tournament play begins.

“We’re really optimistic in getting those last two home games in, we are preparing for that,” Breen said. “Really having our fingers crossed to play those last two games and have however many days we can prepare for those, get back on our feet.”

Even for athletes, access to gym space and workout equipment is off limits. The Minutewomen’s strength coach has relied on sending workouts to players to do in their dorm, but within the small, confined apartment, there is not much space.

Even with things to pass the time, nothing can fully make up for the loss of basketball.

“Yeah, I’m good, could be better,” Breen said. “It’s super weird, super boring, for sure. But I guess the good part is we do have class now so that’s been able to pass a lot of time. A lot of us have a lot of schoolwork synchronous or asynchronous classes. So that passes the time, and we can kind of like get ahead in that sense which is one benefit I guess.”

As classes continue, the number of positive cases on campus cannot. With high hopes to return back to play on Feb. 26. the Minutewomen will do their part to stop the spread.

“We’re going to follow the same protocols that we’ve been doing, and then just be a little extra cautious when going to dining halls and stuff like that,” Breen said. “And then, I don’t know, hope for the best, but know that it can be canceled and try to have each other’s backs as much as we can.”