An inside look at UMass hockey’s final days 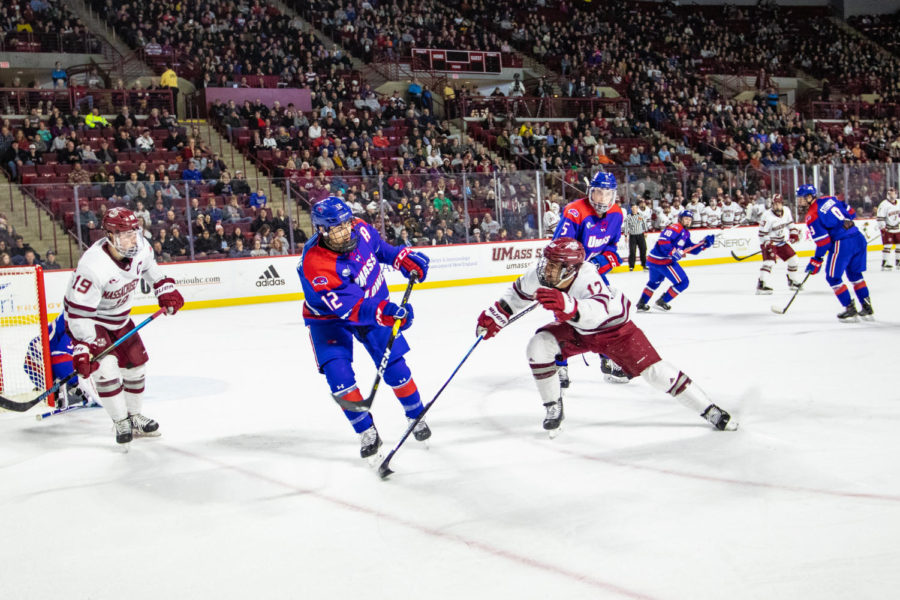 By Evan Marinofsky and Noah Bortle

As Greg Carvel stepped off the Mullins Center ice on March 10, 2020 and walked toward a small scrum of media members waiting to fire questions at him, he pointed his stick out and waved it back and forth.

The Massachusetts hockey team’s head coach was poking fun at the recent ruling by the NHL to require all reporters to stand six feet away from the players and coaches they were interviewing due to COVID-19. The reporters standing around Carvel laughed as well, clustering around the bench boss to ask questions.

“I guess if you’re starting there,” he began. “Do you have any thoughts on the virus and the effect it’s had on college hockey so far?”

At that point, Cornell announced it wouldn’t allow fans for the postseason. The biggest developments with COVID were mostly happening in China and Europe. Students at the University of Massachusetts knew about it because of friends abroad being forced back home. On March 6, 21 passengers on a California cruise trip tested positive. The virus was starting to infiltrate the public consciousness.

Soon, the public themselves.

But that hadn’t happened yet, and the biggest thing was Cornell not letting spectators into its playoff games to watch. Hockey East announced its playoff matchups on March 7. Life was to go on as normal.

“I think it’s really unfortunate that drastic measures are being taken for what’s not really harmful at this point,” Carvel said to the question. “So hopefully we have games here. The players deserve it. We’re crossing our fingers and hoping that it doesn’t affect our games.”

What he said was widely agreed upon – barring fans from a popular sporting event was drastic.

And that was that. The questions went on as usual. How did the team feel about its Hockey East quarterfinal matchup with Northeastern later that week? What were the expectations for John Leonard? How about in net?

The scrum wrapped up. Carvel headed for the locker room. The members of the media waited around for player interviews. They left soon after.

Within 48 hours, Carvel, UMass and the world saw the definition of drastic completely redefined.

At noon on March 11, the UMass finally did what everyone expected it to.

The University followed the lead of, at that point, many schools around the greater Boston area and the country by suspending in-person classes. At the time, one could only infer what that meant for UMass and its involvement in the Hockey East playoffs. In those whirlwind moments, it was hard to think all the way out to the NCAA tournament.

Even in those moments though, it was impossible to imagine anything being canceled. At 2 p.m., Noah Bortle tweeted his story about John Leonard looking to improve his case for the Hobey Baker throughout the playoffs.

Don’t you miss that kind of innocence?

While Amherst was abuzz about an extended spring break and no in-person classes, the world around it continued to cancel.

Harvard announced it forfeited the ECAC tournament and ended any chance at further competition. It was the first hockey team in the northeast to cancel its season. The walls slowly closed around the college hockey world.

At 3:55 p.m., Matt Vautour of MassLive tweeted out a story on UMass athletics only allowing limited capacity at games going forward. In less than an hour, it was announced there would be no fans at Game 1 of the Hockey East quarterfinals between UMass and Northeastern.

“On Wednesday, we heard games are going to be played this weekend for playoffs, but it doesn’t look like we’re going to have fans,” UMass assistant coach Jared DeMichiel said. “Alright, hey, no big deal. No fans. Whatever, we’re still playing. We’re the No. 2 seed. This is a big deal. We think we have an NCAA tournament quality team here and we want to win the Hockey East postseason championship.”

In less than 24 hours, those expectations would hit a wall. One that DeMichiel, the UMass hockey team and the rest of the hockey world would have no control over.

When the sun rose on March 12, the Minutemen readied to face off against Northeastern. A season ago, they had made it all the way to the National Championship game, but had struggled in the Hockey East Tournament — losing in the semifinals.

With their sights set even higher in 2020, Carvel and company felt they had a real shot at making a run for the Hockey East crown, with or without fans in attendance.

Hockey East officials and administrators had a meeting scheduled for the early afternoon to make sure the measures they were taking would be enough in the face of the new virus. For most, the idea of canceling the entire postseason seemed out of the question, especially with the revenue it brings in for the league each year.

By the time the meeting of Hockey East administrators rolled around, two conferences had made the move to cancel their tournaments. Atlantic Hockey and the ECAC would have no postseason play. And with that move, all attention turned to Hockey East, the most prestigious conference on the East coast to see if they’d follow suit.

In the meantime, UMass was still under the understanding that they were playing a game in a few dozen hours. As the players readied for practice in the afternoon, the prospects of a tournament in the Hockey East’s meeting looked bleak.

When news hit Twitter at 1:09 p.m. that there would be no Hockey East Tournament in 2020, UMass’ players still thought they’d have a normal practice in a few hours — or as normal as practice could be given the circumstances. Instead, their phones were inundated with a flood of information.

“It was already on the internet before we even got to talk as a team,” DeMichiel said, “which was kind of frustrating. You would’ve liked to talk as a group and get everybody together before it was announced.”

Instead, players were left with a whirlwind of questions.

Carvel and his coaching staff sought to answer some of those questions and by mid-afternoon the team had gathered for a meeting on the day’s events.

At the time, the program viewed it as a speed bump — that given a few weeks for everything to settle down, they’d be granted a berth to the NCAA Tournament. It was unfortunate that they wouldn’t have a chance to compete for a Hockey East title, but there were bigger fish to fry in the eyes of the UMass team.

That feeling was momentary. By 4:16 p.m. the season was over.

The NCAA made the announcement official that all winter and spring championships had been cancelled. The Minutemen wouldn’t even have a chance to avenge their defeat in the National Championship game a season prior.

The aftermath of it all left a lack of closure. Jake McLaughin, Jack Suter, Mitchell Chaffee and John Leonard had played their last game in maroon and white and hadn’t even known it. A 1-0 win over Vermont was the last time they took the Mullins Center ice.

Beyond that, John Leonard was in the midst of a late-season run that put him in Hobey Baker consideration. Who knows if he was given a postseason to further prove his value, if he would have added another of college hockey’s most prestigious awards to UMass’ trophy case.

McLaughlin was building his case as one of Hockey East’s top d-men, and potentially earning himself a payday when NHL teams came calling at season’s end.

Chaffee was just returning from injury, looking to prove his goal scoring up to that point hadn’t been a fluke.

The lack of closure that hurt the worst might’ve been not getting to see just how far UMass could have gone. Not only were the Minutemen No. 7 in the country — they seemed to be poised to turn a corner. Chaffee was just returning from injury, Leonard was playing the best hockey of his life, the depleted forward depth was starting to replenish as players healed.

But UMass never got a chance.

“That part is hard for me,” Carvel said. “There was business to take care of. That’s hard to cancel your season when you felt like those opportunities were in front of you.”