Angelique Ngalakulondi proves the future is bright for the Minutewomen

Ngalakulondi scored a career high in championship loss to VCU 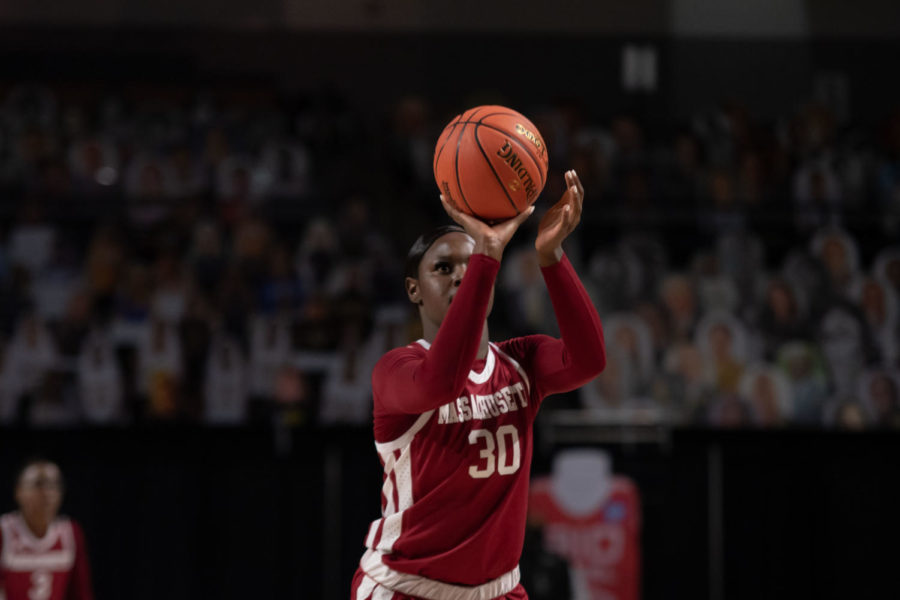 Angelique Ngalakulondi averaged just 0.6 points this regular season. In the first half of the Atlantic 10 championship game on Sunday afternoon, the sophomore scored 17 points, to finish with a career-high 19 for the Massachusetts women’s basketball team.

Through heart, effort, a want to mentality and a never-ending fight, head coach Tory Verdi believed his team would find success this season. When the roster drastically changed days before tournament play began, the question of who would step up for the Minutewomen (14-7, 7-5 Atlantic 10) immediately came into question.

While the seven players in a UMass jersey played in unison as if they were wearing one, Ngalakulondi was the ex-factor that put the Minutewomen in the position to play on Sunday in the first place.

There is no question that Ngalakulondi won the day, despite her team losing 81-69 to Virginia Commonwealth.

“She had a huge impact on the game,” Sydney Taylor said of Ngalakulondi. “Her rebounds, her effort, her put backs, we needed it so much. I’m so proud of her, she worked so hard.”

Coming off the bench, the Minutewomen needed a spark when VCU’s (16-10, 10-5 A-10) Taya Robinson went 3-for-3 from behind the arc to start the game. When UMass had trouble mirroring the success that the Rams had on the 3-point line, any shot attempt from outside by the Minutewomen fell into Ngalakulondi’s hands under the basket for an easy two pointer.

The opportunity for Ngalakulondi to provide for the Minutewomen was not a matter of if she could, but rather when she would get the chance to.

“It felt really good,” Ngalakulondi said of her performance on Sunday. “I did what I knew I could do out there for my team.”

Rebounds have been somewhat of an Achilles heel for UMass all season, both offensively and defensively. As much as rebound machines like Breen have stepped up, the put backs that Ngalakulondi had all weekend long gave UMass a much-needed push, something that Verdi has asked for from his players.

The last time the Minutewomen faced VCU, Maddie Sims had eight rebounds. Without Sims on Sunday, Ngalakulondi snagged nine total boards, seven of them coming on the offensive end. She also had three blocks.

“Angelique … this whole tournament has been playing her butt off,” Breen said. “Today she was cleaning up every offensive board, every defensive rebound, finishing everything, she played incredible.”

Despite only playing 49 total minutes during the regular season, Ngalakulondi seamlessly worked a pick and roll game with Destiney Philoxy and made easy cuts for Breen to bounce pass on the run towards the bucket.

When VCU defenders double teamed Breen, she made a crisp bounce pass through the legs of a Rams defender to Ngalakulondi on the block. A play that looked to be one they had practiced all season long.

Down 61-66 with just under five minutes remaining in the fourth quarter, Taylor cut towards the basket with her hand in the air. Ngalakulondi threw her a b-line pass over the defender from the top of the key, for a layup that cut VCU’s lead to three.

After Friday’s win over Fordham, Verdi highlighted how much Ngalakulondi has grown, despite his coaching staff “throwing her into the fire,” during the tournament. The sense of pride towards his sophomore post player remained the following games.

The silver lining within this loss for the Minutewomen is that all seven players, including the sophomore playoff standout, return next season. This time with a lot more playoff experience under their belt. As much as Verdi appreciates what Ngalakulondi did on the court in the last four games, the off-court impact will last way longer than the Minutewomen’s tournament run.

“She was rebounding the ball out of her area, getting us second chance opportunities,” Verdi said. “Defensively anchoring us, just taking up a lot of space. She alters a lot of shots.”

“I am super proud of Angelique and what she has accomplished. I know for a fact this is going to give her a lot of confidence. This team and the players that are here have a bright future.”

Breen and Taylor echoed similar messages about the future, emphasizing how the bar is raised and the potential this young group has. Whether it’s the chance to compete in the Women’s National Invitation Tournament or focus on next season, Breen feels that this group of seven players has nothing to hang their heads over.

“We’re not done yet, we have a lot more we can do,” Ngalakulondi said.