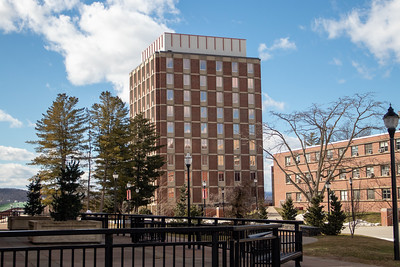 By Will Katcher, Assistant News Editor

With new cases of the coronavirus and the positive testing rate falling, the University of Massachusetts lowered its campus risk level Wednesday, an email from the University announced.

Since early February, when the school recorded over 750 COVID-19 cases in a two-week span, new positive tests have dropped off significantly. Last week, between March 15 and March 21, 55 students and staff contracted the virus. In the same period, the positivity rate fell to 0.26 percent.

The new “Guarded” posture is the second lowest of four campus risk levels and means that the Campus Recreation Center can continue holding some in-person classes with reduced capacity. According to the school’s Spring 2021 webpage, the Guarded level may allow students to eat in the dining commons.

“To sustain this operating posture, our entire community must remain vigilant by following vital public health protocols including social distancing, mask-wearing and socializing within your bubble,” co-directors of the Public Health Promotion Center Jeffrey Hecock and Ann Becker said in the email. “Limiting unnecessary travel and keeping your social circle small really do make a difference.”

In early February, the spring semester appeared threatened as the virus tore through dormitories and off-campus residences. The spread was especially prevalent among undergraduate students, Chancellor Kumble Subbaswamy said at the time.

The virus’ travel was eased by students failing to obey basic health and safety guidelines in lieu of gathering both on- and off-campus in crowds without masks. The Daily Collegian reported that resident assistants were largely powerless to slow rule breaking in residence halls, and that students were gathering in groups over 20.

But since then, the outlook in Amherst has improved. Even as weekly tests have risen, from roughly 17,000 the first week of the semester to over 20,000 for four straight weeks, cases have fallen fairly consistently.

By the third week of February, 30 people on average were testing positive each day, down 50 percent from the first week of the month.

On Monday, the most recent day of available data, 12 people tested positive.

Only 71 active cases remain in the UMass community, dramatically lower than the several hundred that marked the height of the virus’ spread.

Still, the school has urged students to stay vigilant.

“We want to remind everyone that we need to continue to follow all public health guidelines so we do not lose the hard-fought ground we’ve collectively made,” Hesock and Becker wrote on Friday. “Please stay masked, distant and get outside as spring arrives.”