The Minutemen advance to take on Bemidji State in Regional Final 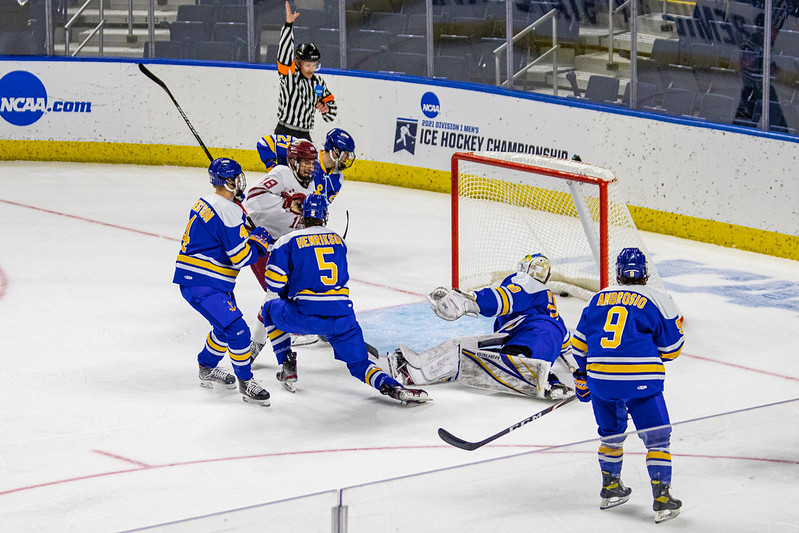 BRIDGEPORT, Conn.—Anthony Del Gaizo and Mareks Mitens slowly rose from the ice right outside of the crease. The net, off its moorings, sat a few feet away, a casualty of a net front battle.

It was midway through the second period and in an effort to keep Del Gaizo away from a loose puck near the crease, a Lake Superior State defenseman had muscled him into his goaltender, toppling the two and the goal in the process.

The physical encounter was a common occurrence on Friday night, one that the Massachusetts hockey team won more often than not in its 5-1 win in the first round of the NCAA Tournament on Friday.

And the engine that seemed to power the Minutemen’s physical presence was Jake Gaudet, finding himself at the center of many exchanges.

“It’s great to see him having success here,” Carvel said of Gaudet. “Down the stretch here, he’s coming up big. And we need that.”

There may have been no better example of this than the senior captain’s game-opening goal.

Battling down low midway through the first period, Gaudet managed to carve himself out some space on the doorstep of the Lakers (19-6-3, 13-5-0 Western Collegiate) crease. Just as Gaudet got inside position on the d-man, Jerry Harding got the puck to him for an easy tap-in goal.

Minutes later, Gaudet found himself at the center of yet another tangle of bodies. This time, things didn’t pan out in the Minutemen’s favor. As Gaudet came across the crease on the forecheck he skated into the leg of Mitens, putting LSSU on the power play—the second of six UMass penalties on the night.

“We cheated the game,” Carvel said of the penalties, making a point that the calls weren’t a result of the team’s physicality. “When you cheat the game, that’s what happens.”

It didn’t take long for Gaudet to make up for his time in the box, however. As the center was released, he chased down a Laker puck handler, dispossessing him from behind and taking the puck the other way.

Following the physical tone set by Gaudet in the first frame, more Minutemen followed as the game progressed. The first of two second period goals was a product of freshman Josh Lopina winning a puck battle in close to the net, not too different than the lamplighter Gaudet had tallied in the first.

Not to be outdone by his teammate, Gaudet showed his strength once again in the middle of the third frame. On a 5-on-3 power play for UMass, Gaudet once again worked his way to the front of the net, wedging himself between a defenseman and the goalie. And once again the puck found him out front for him to deposit his second goal of the night.

“Sometimes they just come,” Gaudet said. “I’ve got really good linemates that found me in front of the net tonight. Those are two of the easier goals I’ve scored.”

While his two goals are what jump off the stat sheet, it was the physical tone that Gaudet set that bled into the rest of the Minutemen’s game on Saturday night, setting up UMass for a date with Bemidji State on Saturday with a trip to the Frozen Four on the line.