The Eagles controlled 22 of 28 draws in the dominating victory 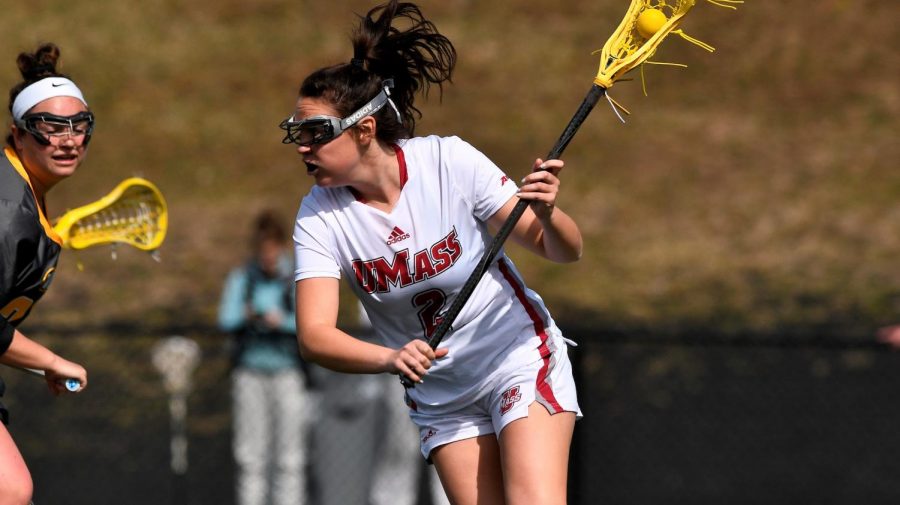 Coming off a momentous win over Boston University on Sunday, the No. 22 Massachusetts women’s lacrosse team faced a tough test against another Boston school on Tuesday. After trailing 4-2 just 10 minutes into the contest, No. 11 Boston College tallied off 12 of the next 14 goals en route to a dominant 19-7 victory.

“BC came out firing on all cylinders, and they got into a groove and really put some pressure on us,” UMass head coach Angela McMahon said postgame. “We just have to respond better when we get that type of pressure.”

Senior attacker Charlotte North was the difference-maker for the Eagles (3-0) in this one, but that impact was not from her goal-scoring prowess. Instead, North powered Boston College to a staggering 22-6 advantage in draw controls, which led to consistent Eagle attacks from start to finish. This edge resulted in 36 shots, including 30 chances on net.

With North scoring just twice on three shots, the onus was put on the other Boston College attackers to step up. They more than delivered on that onus, especially Jenn Medjid and Belle Smith. That pair combined for eight goals and two assists by finding the soft spots in the defense and beating Minutewomen (1-1) defenders in one-on-one situations.

“I thought they moved the ball pretty well today, probably better than they’ve moved it in the past couple games,” McMahon said of BC’s potent, well-rounded attack. “Having one of the best players in the game on your roster frees up some space for some other people to make plays, and today, they certainly made those plays.”

Despite what the final score shows, the Minutewomen actually started this game off strong. Thanks to an aggressive attack and some timely saves from goalkeeper Lauren Hiller, UMass held the lead up until the midway point of the first half. After that, though, was a near 30-minute scoring drought for nearly the entire second half that crushed any thoughts about a comeback.

“[Not scoring] puts a lot of pressure on our defense, and we had to play a lot of defense throughout the whole game,” McMahon said. “That makes it hard to get into a rhythm offensively. We learned a lot; we’re gonna grow from it and get better.”

Part of that aggressive attack early on was top scoring option Haley Connaughton. After a nine-point outing on Sunday, the senior scored twice in the first 10 minutes on Tuesday and was generating solid offensive chances out of the X position with fellow attacker Alex Finn. But Connaughton was held in check for the remainder of the contest, unable to muster even a single shot after that point.

“They changed the way they were playing her and just really tried to deny her the ball,” McMahon said of how Boston College adjusted to Connaughton’s hot start. “I think we could’ve done a better job of trying to utilize that [defensive attention] more… they were all over her.”

Now sitting at 1-1, the Minutewomen have some time to figure out what went wrong on Tuesday and determine a game plan to bounce back. They take on Connecticut on Sunday, who come in with a 2-1 record having just demolished New Hampshire 19-3.

“Probably just taking better care of the ball and better execution on our shots,” McMahon said on what she wants the team to focus on in practice ahead of this weekend’s matchup with the Huskies. “I love this squad. I think our team has this really great chemistry and really great people. We just need to clean up a few things… we’re gonna practice hard, watch some film, learn from it and move on.”

Faceoff in Storrs, Conn. is scheduled for 1 p.m.