Minutemen finish 8-7 on the season 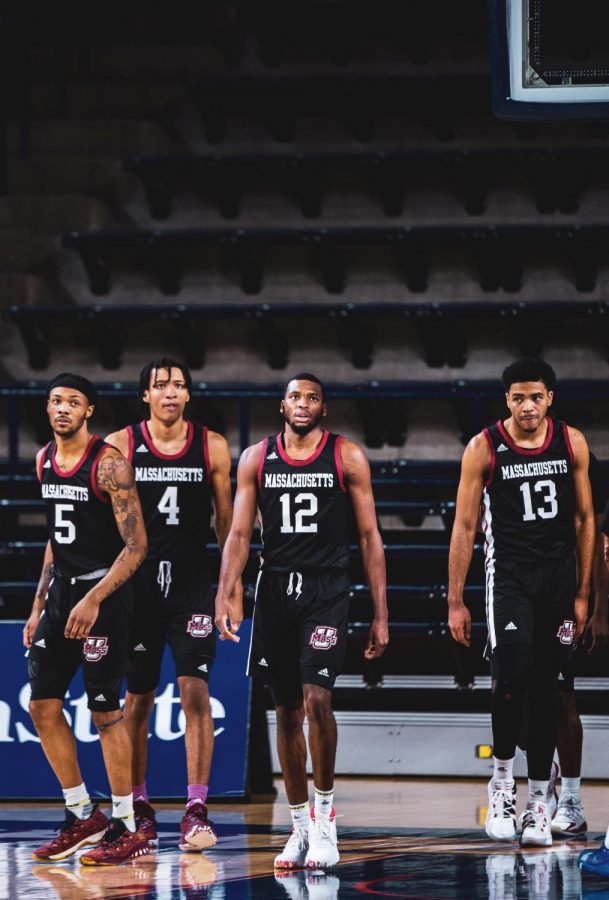 One day removed from a blowout victory over Saint Joseph’s, the Massachusetts men’s basketball team fell to Saint Louis 86-72 in the Atlantic 10 quarterfinals, ending one of the most irregular seasons in Division I basketball history.

Over the course of the year, UMass (8-7, 6-4 Atlantic 10) underwent five pauses of at least one week due to a myriad of factors including an internal COVID-19 outbreak in late November that delayed the season start, insurrection at the nation’s Capital, contact tracing with other schools and a University-wide pause to athletics.

“It was a lot about your mindset this year,” Tre Mitchell said. “So many things changed this year like we were getting ready to go on the road and boom cancelled. Can’t even leave your room for 15, 18 days. There’s just a lot of mental toughness that required to get through this season and I’m proud of our guys for how we responded.”

For a young team comprised mostly of underclassmen including five freshmen, adjusting to the college game came with those additional challenges.

“These guys spent Thanksgiving in a hotel quarantining,” said head coach Matt McCall. “The resiliency of the whole group and our freshman class was terrific.”

The loss to the Billikens (14-5, 6-4 A-10) could potentially end the collegiate basketball careers for UMass captain Carl Pierre and graduate transfer Mark Gasperini. Though the NCAA has granted an extra year of eligibility to winter sport athletes, the two will have to decide to continue playing basketball or move on in life.

“First and foremost, I want to thank our seniors,” McCall said. “Obviously, there’s a lot of uncertainties in terms of what’s next and eligibility and things like that.”

McCall got a bit emotional when referencing his senior captain, who joined the Minutemen as a freshman the same year he was hired as coach.

“Carl Pierre, who has been with me since day one, embodies everything UMass basketball is about,” McCall continued. “Never late, walking away from here with two degrees, ultimate culture guy. I’m appreciative of his loyalty not only to this program but to me personally.”

“His next step is he’s going to be successful because of who he is as a person. Whatever is best for Carl and his family, that’s what’s next.”

In addition to the uncertainty from the senior class, Mitchell’s next step may also raise some question marks. The sophomore center scored 30 points in the loss to Saint Louis and ranked third in conference scoring per game with 18.8 points per contest.

Though returning to the Minutemen for his junior season would provide stability for Mitchell who is surrounded by many of his prep school teammates, he’ll certainly have the option to transfer to a Power Five school or even test the NBA Draft waters if so chooses.

“Obviously, there’s some discussions to be had about what is the next step for me and what comes next in my career,” Mitchell said. “I’m going to take advantage of this offseason. I need to get bigger, faster, stronger, better. I believe everything will fall into place, I just have to take things one day at a time and things will happen as they should.”

Despite the questions that surround UMass heading into the offseason, McCall is focused on letting his guys recover from the hectic past few months before those conversations take place.

“The first thing we are going to do is take a step back and catch our breath,” McCall said. “Give our guys the time to reflect and give us time to reflect. Then there will be team meetings, there will be individual meetings with every player and we’ll start to work on next year.”

“You’ll have to have some open and honest conversations, then its about getting back to work.”

At any rate, the Minutemen have a solid future foundation in place. One of the youngest rosters in Division I basketball overcame continuous adversity and overperformed from its eighth-place conference preseason poll ranking.

With the likes of Noah Fernandes, Javohn Garcia, Ronnie DeGray III and Cairo McCrory amongst others making a major impact in their first seasons at UMass, there is good reason to be excited for the future of the program.

“We’ve got a lot of talent on this team, we’ve got a lot of dudes who can go any night,” Mitchell said. “I honestly think our entire roster can put up double-digits any game. Just building off this its just about experience. As they get more experience under their belt, we’re just going to get better and better.”