‘Like flies on rice’: Minutewomen’s aggressive defense powers them to 16-7 victory over UMass Lowell 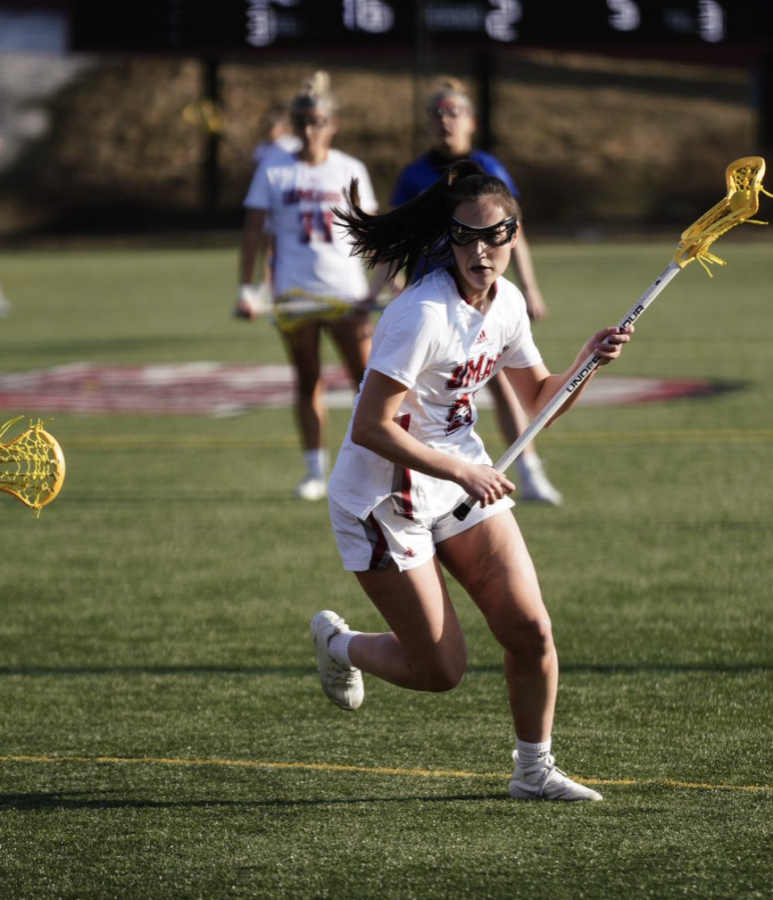 It took UMass Lowell 13 minutes of its match against the Massachusetts women’s lacrosse team to record a shot – one that didn’t even reach graduate goalie Lauren Hiller at the net. By that point, the Minutewomen (2-2) had scored nine straight goals and the contest was quickly slipping away from the Riverhawks (1-3). While the UMass attackers should receive the majority of praise after Tuesday’s dominant victory, it was the defense’s consistent aggression that allowed the Minutewomen to build such a monumental lead.

“I thought we did a great job of swarming them; we got some really good double teams,” Minutewomen head coach Angela McMahon said. “Just putting a lot of pressure on them… it was all just really united team defense.”

That united defense, led by seniors Audrey Fantazzia and Courtney Barrett, held Lowell to just five first-half shots and two goals. They were particularly successful in sniffing out the River Hawks’ one-on-one attacks and bringing a secondary help defender when necessary. Near the end of the first half, ESPN+ analyst Cam Sibert described UMass’ defensive intensity on Lowell’s attackers as “like flies on rice” – which, albeit was not the most coherent simile, but a fitting description for the way they played.

“That’s been a big focus: our ability to slow [their] players down and also forcing them into some tough angles, and I think our defense did a great job of that,” McMahon said. “They just seemed all on the same page, and the goalies were really leading out there with their communication.”

Goalkeeper Lauren Hiller in particular must have felt very fortunate for her team’s defensive effort on the afternoon. While she certainly made some timely saves when needed in the first 30 minutes, McMahon gave her the rest of the afternoon off after halftime, inserting Bridgette Wall, and later Tess Castellano, in net to finish the job. Much of Hiller’s afternoon, which included just two saves, was simplified by UMass’s ability to force River Hawk turnovers throughout.

“We definitely were focused in on that defensive transition, so from the second that we missed a shot or turned a ball over, we wanted to make sure that we were applying pressure immediately,” McMahon said of her team’s propensity to force giveaways. “I thought that both our offensive players did a great job of that and then all the way through down to the defense; really from top to bottom, they were united in that, just causing those turnovers.”

McMahon described her team defense as “united” twice postgame, which is reflective of just how consistent this effort was applied throughout the roster. Even the back end of the roster, who was vibrantly celebrating on the sideline during the first half, got in on the action and maintained the lead on the field in the second. That sense of energy is something they showed in this game and hope to carry into this weekend’s contest against UConn.

“[This win] ignited some life in us and got us going,” McMahon said. “It looked like they were having fun out there and playing together as a team… when we do that, I think we’re pretty hard to stop.”

The Huskies, after their overtime win against the Minutewomen last Sunday, will attempt to stop UMass for a second time on Saturday. Faceoff in Amherst is scheduled for 1 p.m.