The move comes before the A-10 Tournament 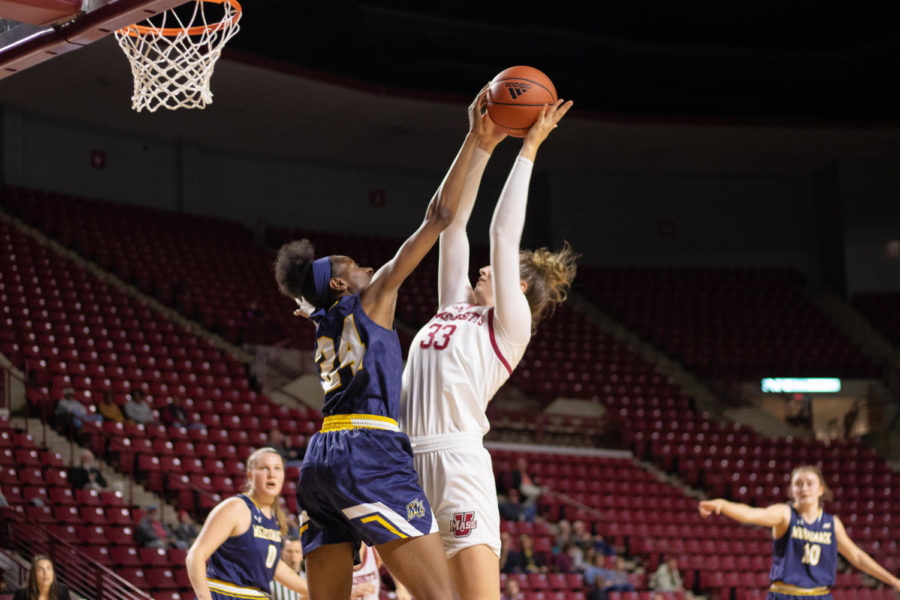 The Massachusetts’s women’s basketball team will be without Maeve Donnelly and Desiree Oliver as it closes out its season. The two are no longer part of the program the Collegian has learned from UMass Athletics.

Maeve Donnelly and Desiree Oliver along with transfer Danielle Sanderlin will not travel with the team this weekend.

Sanderlin has not played with the team since before the campus-wide COVID-19 pause in early February.

When head coach Tory Verdi was reached for comment, UMass Athletics said, “as this pertains to a personal/team matter, Tory respectfully passed on a follow up.”

The magnitude of this loss stretches far beyond this season as Oliver and Donnelly had one and two years left with the program respectively.

Donnelly, a sophomore, was a key player for the Minutewomen in her rookie season. Not only did she start every single game, but she broke a single season record for blocks. Due to injury, she sat at the beginning of this season but stepped up as a post player in recent games for UMass. Donnelly had her first start of the season against Virginia Commonwealth in place of Maddie Sims who was in the concussion protocol.

Donnelly is a perfect example of a “seasoned” player who would have potentially made a large impact for the Minutewomen in the A-10 tournament.

“I wish the team the best in the upcoming tournament,” Donnelly said when reached for comment.

Redshirt junior Desiree Oliver sat out last season due to NCAA eligibility rules but also battled injuries at moments midway through the 2020-21 season. The dependable and skillful guard played crucial minutes early on this year and in the final game of the regular season against Richmond.

Oliver and Sanderlin could not be reached for comment.

The Minutewomen now head to Richmond with their five starters, and only four reserves, one of those being recent high school graduate Stef Kulesza. Maddie Sims is expected to return from concussion protocol for the tournament.

Verdi has utilized Makennah White as a post substitute for either Breen or Sims for most of this season and gave Sanderlin valuable minutes during her short time on the team. 6-foot-2 sophomore Angelique Ngalakulondi is another option down low but has only played 49 minutes all season.

Junior sharpshooter Madison Lowery will likely be the Minutewomen’s main option off the bench in the guard position.

UMass plays its first game against Saint Joseph’s on Thursday, tipoff at 5 p.m.