Marinofsky: Why this Hockey East Championship is extra special for UMass

In a season as tumultuous as this one, UMass prevailed. 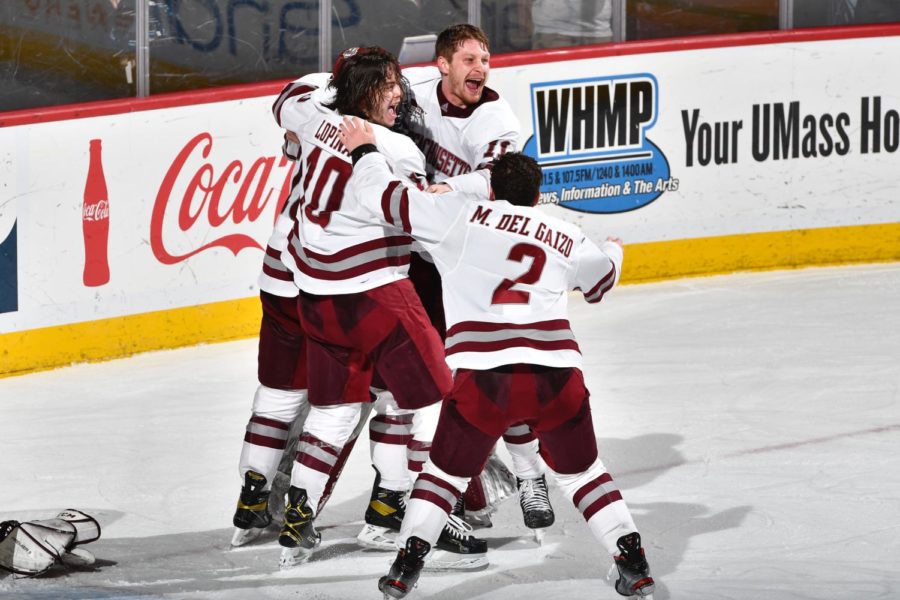 The Massachusetts hockey team won its first ever Hockey East Championship Saturday night. It took UMass roughly 27 years to get its first. Of course, when the time came for this, it was always going to be a special night.

Yes, the Minutemen’s stingy defense, gritty goal-scoring ability and strong goaltending won them the game over Lowell, 1-0, playing right into their strengths. Yes, under head coach Greg Carvel, UMass underwent a face-lift even the best plastic surgeons dream about.

And yes, Bobby Trivigno dropped an F-bomb on live television. Apologies in advance to those without DVR.

But what made this even more special than anyone could’ve ever imagined was the sacrifices made by players, coaches and staff to keep playing hockey during the COVID-19 pandemic.

“Let’s be the best at dealing with COVID,” Carvel said to his team at the start of the 2020-21 season. “Let’s make it an advantage for us and I think early, the first half of the year, it could be a real advantage because we didn’t get shut down. You play teams that don’t have as much experience as you do, our number of games played. So, our sacrifice was let’s really take care of ourselves.”

Taking care of themselves began in September when the team arrived in Amherst and practiced day in and day out for almost three months with no idea when the season would start. There were no opponents, no film to watch, no teams to prepare for. Just constant battles against the same guys doing the same drills.

Then came the staying in. Hockey, Zoom class, eat, sleep, repeat. Gone was the social life and normal college life the upperclassmen had become accustomed to. For the freshmen and transfers, everything they imagined college, specifically UMass, to be was uprooted. Most players last saw their parents in August, which meant most didn’t make it home for Christmas.

Ultimately, they were the only team at UMass to not register a single positive test.

“Our players stayed out of trouble, stayed out of bad situations to avoid the virus and that’s sacrifice,” Carvel said after the game via Zoom. “How do you handle that? These kids handled it superbly.”

When the schedule did come around, it was constantly changing. The normal pre-scouting routines of opposing teams went out the Mullins Center windows when the opponent for Friday games got announced on Wednesdays.

That’s life in this pandemic for a hockey team. That doesn’t make it easy.

The Minutemen had their ups and they had their downs. The ups were the seven-game win streak and beating No. 1 BC in Chestnut Hill. The downs were starting the year off extremely inconsistent and losing to Maine in a shootout to end it.

The only time in which the University didn’t allow them to play was for an athletics-wide, two-week shutdown in mid-February in response to the rapidly rising cases at UMass.

Over those two weeks, there were no practices. Instead, they held a book club.

“I’m really proud of our team,” UMass captain Jake Gaudet said after winning the Hockey East title. “Guys have done a great job of being safe. We were able to play all year and it was awesome.”

Carvel and the gang went 5-0-1 in the six games since that shutdown, outscoring opponents 24-9. One of those was the 8-1 drubbing of Providence. Another was the close, 1-0 win over Lowell to win the whole thing.

There would’ve been a lot for them to be proud of even if they didn’t win Saturday night. The Minutemen had already put themselves in prime position for the national tournament. Maybe even a loss in the Hockey East playoffs would’ve had them even more motivated for the big dance.

But those are all hypotheticals because they did win, emerging as the champions of Hockey East for first time in school history.

That’s made all the sweeter by the amount of sacrifices and hurdles they overcame to win in a season as tumultuous as this one.

With Saturday’s win, it’s safe to say they really were the best at dealing with COVID.