Taylor, Breen and Philoxy named to All-Tournament Team despite loss 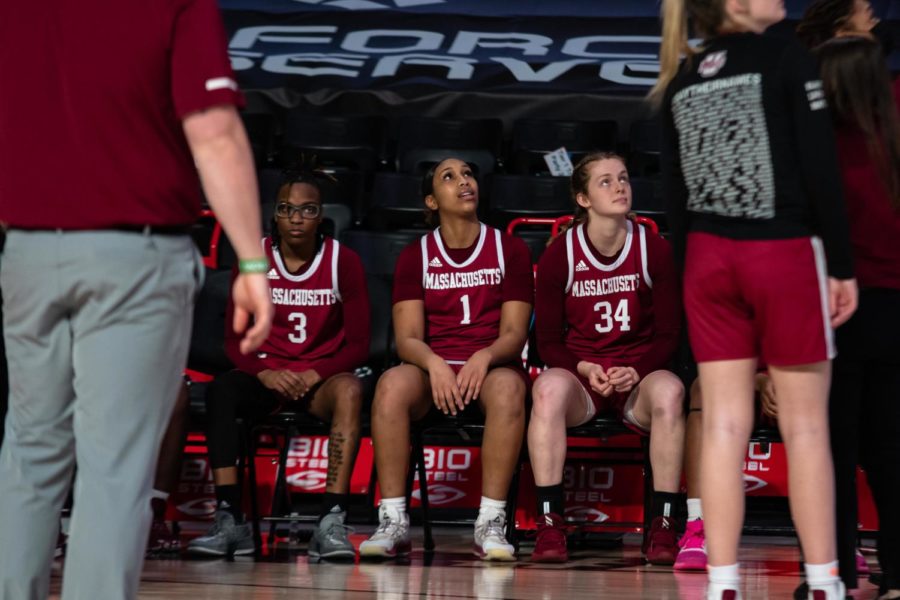 That is the number of minutes Atlantic 10 All-Tournament Team selection Sam Breen played for the Massachusetts women’s basketball team in the last four days, and her teammates weren’t too far behind. In fact, Breen did not sit for a single second of the magical tournament run that ended Sunday after an 81-69 loss to the Virginia Commonwealth Rams in the A-10 Championship.

“It hurts; it definitely stings,” Breen said of coming so close to the team’s ultimate goal. “Just knowing we could’ve pulled this one out hurts the most.”

One could reasonably criticize UMass (14-7, 7-5 Atlantic 10) head coach Tory Verdi for not adjusting enough to VCU’s (16-10, 10-5 A-10) hot shooting start (64 percent from 3-point range in the first half) or Breen for not having the scoring acumen (12 points on 4-of-15 shooting) she has displayed all season long. But the one thing you can’t say about this group is that they didn’t leave it all on the floor.

“The outcome obviously isn’t what we hoped for, but they have so much to be proud of,” Verdi said of his team’s performance. “When I recruited Sam, we talked about this moment, we talked about [how] anything is possible, and that we’re going to move mountains together. To be honest, that’s starting to happen.”

Alongside Breen, fellow captain Destiney Philoxy and sophomore sharpshooter Sydney Taylor were named to the All-Tournament Team, as well. While Breen has never been one to gloat about individual achievements, the honor was certainly deserving for her and the other two program’s pillars. Taylor tallied more than 20 points in three of the four tournament games (including 23 in this one), Breen was the tourney’s leading rebounder and second-leading scorer and Philoxy’s unique playmaking and leadership abilities on both ends of the floor kept UMass in every game in Richmond.

“I’m very fortunate that I get to work with student athletes like Sam Breen, Destiney Philoxy, Sydney Taylor, and the rest of our team,” Verdi said. “Having the opportunity to coach them up and teach them and guide them and learn about them on and off the court has been awesome, and I look forward to doing it for a pretty long time.”

So, what’s next for this talented trio and the rest of their teammates? While their season might be over, there is a significant possibility that they could make the Women’s National Invitation Tournament (WNIT), whose selections are decided on Monday night. Given UMass’ strong overall record that was capped off by an appearance in the A-10 Championship, the Minutewomen have entertained the thought that their work is not yet done.

“Yeah, we talked about it a little bit,” Taylor said of the potential tournament bid. “If we do make it, we’re going to get right back into the gym… that’s something that we’re definitely looking forward to.”

Even beyond the chance of another tournament run, the future is bright in Amherst, and that was more apparent after these last few games. The Minutewomen get Philoxy back for another year and Breen for another two. Taylor still has another two seasons to develop her game and emerging freshman Ber’Nyah Mayo is just scratching the surface of her two-way potential.

Angelique Ngalakolundi emerged as an electric force off the bench in the tournament, which she closed with a career-high 19 points on 8-of-9 shooting in the championship defeat. And soon-to-be-freshman wing Stefanie Kulesza, the former top 100 recruit, has four years to display her talents, along with the rest of the loaded 2021 recruiting class.

“We don’t have anyone graduating out of the seven of us, and we have five really talented freshmen coming in next year,” Taylor said. “We expect a lot, and we’re going to be really good next year.”

Regardless of their future, the Minutewomen’s play over the last few days leaves them with a lot to hang their hats on. Their run epitomized the captivating essence of March Madness: after losing four of five games to close the season, multi-week-long COVID-19 pauses due to no fault of their own and just two active bench players, this team achieved what nobody thought they could. Except for them, of course.

“Early on and even later on in the season, a lot of people counted us out,” Breen said. “They thought they were going to just come in and win, and we showed them what we’re made of… Going into next year, they know that they have to come out and play against UMass, and UMass is not an easy win.”

“This is the hardest year that I’ve ever participated in and coached,” Verdi said of the season as a whole. “For our players to be tough enough, both mentally and physically, to go through what we have gone through: seven months they’ve been on campus, they’ve only had the opportunity to go home for four nights… the only two places they could go was their dorm room and the gym… for our players to come back and be resilient… just goes to show you how special of a group this is, and I love them. I have one biological daughter, and then I have another seven here. I’m super proud of these guys.”