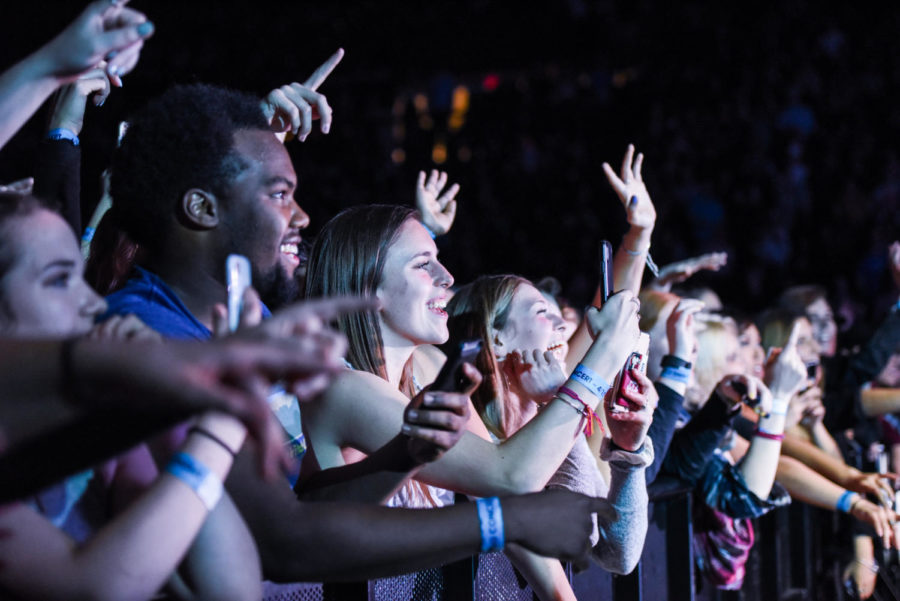 If there’s one thing musicians of any decade have in common, it’s the knowledge of how to put on a show.

From stage lighting changes accompanying guitar riffs to bumping up the energy in an arena, seasoned bands and newcomers treat concerts with a steady devotion that hasn’t fallen away, even as the physical component of concerts became impossible since the beginning of the pandemic.

With tour dates being rescheduled repeatedly and sold-out events being canceled one-by-one across all genres, there has never been more of a need to redefine what a concert entails. Replacing arenas with live streams is just as odd a concept to fans as it is to artists alike, yet albums are still dropping and artists know they need the push that concerts bring. By waving goodbye to crowded venues and switching to virtual live events instead, artists are doing just that.

COIN, the Nashville trio behind the enigmatically upbeat track “Crash My Car,” began 2020 by dropping their third studio album “Dreamland” and a tour to accompany it. Despite being scheduled to hit Boston in mid-March last year, fans across the state could only see them eight months later at a virtual concert due to the tour being canceled. Energized with new tracks to perform, and their trademark colorful visuals to charm the crowds, COIN set out to light up screens back in November. But they aren’t they only ones doing so.

Across the ocean, the English rock band Nothing But Thieves geared up for live shows that were designed to be more accessible to fans worldwide. With three different dates being announced by the band, each of them catered to a different time zone, virtual concerts have given artists and fans alike a way to connect despite the distance between them. Accessibility to artists from different countries has become possible in a way that was unimaginable before. With Tokyo and New York tuning into the Nothing But Thieves shows being streamed from England, time zones are beginning to blur.

If accessibility to musicians across the globe isn’t enough, the virtual stage has many of the well-loved characteristics of its physical counterpart. Artists like Waterparks, who have an album being readied for release, satisfy their fans’ craving for new music through glimpses of their journey virtually. The band has an upcoming virtual show called the “Anti Tour” named so because it’s “coming nowhere near you.” The exclusivity of connecting with one’s favorite artists remains and is only becoming richer due to these virtual shows lasting mere nights, compared to months of physical tours.

One of the latest artists to announce virtual shows that will be exclusively streaming for limited hours is U2. They are releasing their opening show to a series of virtual concerts titled “The Virtual Road.” The band behind iconic rock staples such as “Vertigo” and “With Or Without You” are starting this series off on YouTube with a recording of a show performed by them in 2001 in Slane Castle in Ireland.

Fans are pouring out love while artists are pouring in labor to keep virtual concerts alive. Yet, every artist isn’t taking the same route to stay connected. Some are releasing footage of concerts gone by and others are livestreaming events in hopes to showcase their newer releases.

However, most artists who are taking the virtual stage are ones with a steady fan following. With low hopes of opening acts enticing new listeners and not enough reach to organize a virtual concert for themselves, newer artists are facing almost a year without performing live. The drastic changes in the music ecosystem in the past year have pushed many upcoming artists to take to platforms like Tik Tok and Instagram to hook in new listeners, all with catchy videos and enticing song snippets.

Musicians are adapting to this new era, but there’s a lot lacking from virtual shows that can only be remedied by physical concerts. Virtual concerts can’t capture the lineups of multi-artist events like Chicago’s Lollapalooza, or New York’s Governors Ball Music Festival. The exclusivity and the lowered cost of online tickets will appeal to some even in the future. Those listeners who can’t find the time to fly out to different states for an event or camp out for hours before a show will also undoubtedly appreciate virtual dates.

But for now, all fans can do is find a virtual show that’ll keep them satiated as they jam along to their favorite tracks in the safety of their homes.

Anushka Singh can be reached at [email protected]