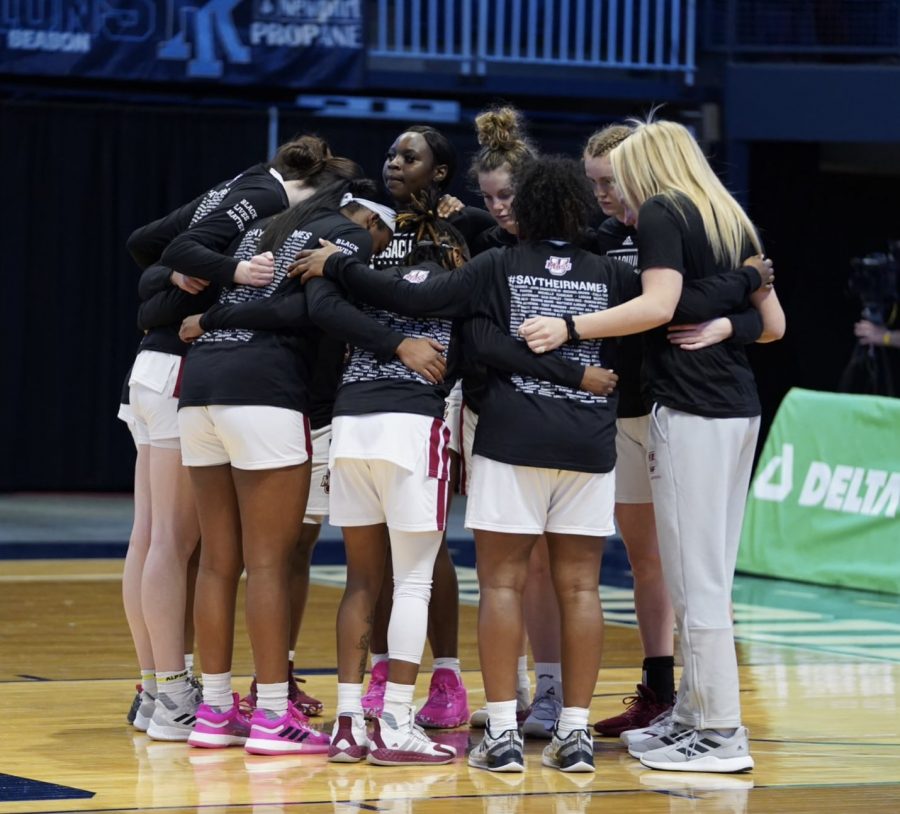 Closing in on the end of the first half against Richmond on Sunday, the Massachusetts women’s basketball team needed a spark. Having not scored in more than five minutes, the offense was stagnant, and the defense was surrendering look after look from beyond the arc to 3-point markswoman Kate Klimkiewicz.

That spark came in the form of a 50-foot, buzzer-beating heave from Destiney Philoxy, who brought UMass within five and shifted the entire momentum of the contest.

“It was definitely a momentum builder, and I just thought that we came out with great energy and want to in the second half,” head coach Tory Verdi said of the slingshot. “I think that shot contributed to that.”

After the halftime break, the Minutewomen raced out to a red hot 7-of-8 shooting start and put together a 10-0 run near the end of the period. The guards were flying up and down the court, the forwards were cutting well and making smart passes, and the offensive attack as a whole was connected and free flowing.

“After the halftime, we realized that our shots would start falling, so we held it together,” Philoxy said of the team’s post-break mindset. “We were like, ‘guys, let’s control the controllables, cause right now, this team is outplaying us, and we know who we are.’ Once we did what we had to do… we just kept pushing. That’s it.”

Sam Breen certainly never stopped pushing in Sunday’s victory. The senior standout finished with a career-high 18 rebounds and brought a blue-collar mentality to the second half when her team needed her most. A double-double machine all season, Breen needed just the second half to reach the mark with 12 points and 12 boards over the final two periods.

“In the first half, they were getting offensive rebounds, kick-outs, threes, second chance opportunity points,” Verdi said of Richmond when Breen wasn’t dominating the boards. “[In the second], we were able to gobble up those rebounds and then go turn those rebounds into points… her efforts certainly paid dividends here for us tonight.”

Breen was almost forced to gobble up those rebounds out of necessity, as she was missing her frontcourt partner, Maddie Sims, the team’s regular starting center who was out with a concussion. This would have been Sims’ final regular season game had she played but was still honored as the team’s only departing upperclassmen with a fitting name for the afternoon: Maddie Sims Day. According to her teammates, this win was all about her and what she has brought to the team all season long.

“On the sideline, I talked to Maddie already, and I was like, ‘I promise you, we’re gonna get this W just for you because I know you’d be on the court killing… but you can’t, so we got your back,” Philoxy said on what she talked about with Sims before the game.

After having missed the last two games, the team is hopeful Sims will be able to return by the Atlantic 10 Tournament, which is scheduled to start in less than two weeks. The victory on Sunday locked UMass in as the seventh seed, and they will take on 10th-seeded Saint Joseph’s Hawks on March 11.

Heading into the tournament matchup, this win over Richmond was a much-needed one for the Minutewomen, who were lacking confidence and an overall sense of normalcy after going on a three-week pause and not winning a game in more than a month.

“Just hopefully, some momentum,” Verdi said of what he hopes the team can take away from today’s victory. “It’s been a long month, to say the least… it was good to see us kind of get our legs back in the second half here today.”

Even with the recent losing streak, this team has stayed confident and continues to believe it can win an A-10 title. After today’s win, Philoxy was the most vocal and confident supporter of that sentiment.

Their path to that title starts on March 11 against the Hawks, who won their only contest against the Minutewomen this season a month ago. Tipoff in Richmond is scheduled for 5 p.m.