Tre Mitchell scores 30, but is unable to carry UMass past Saint Louis in A-10 tournament 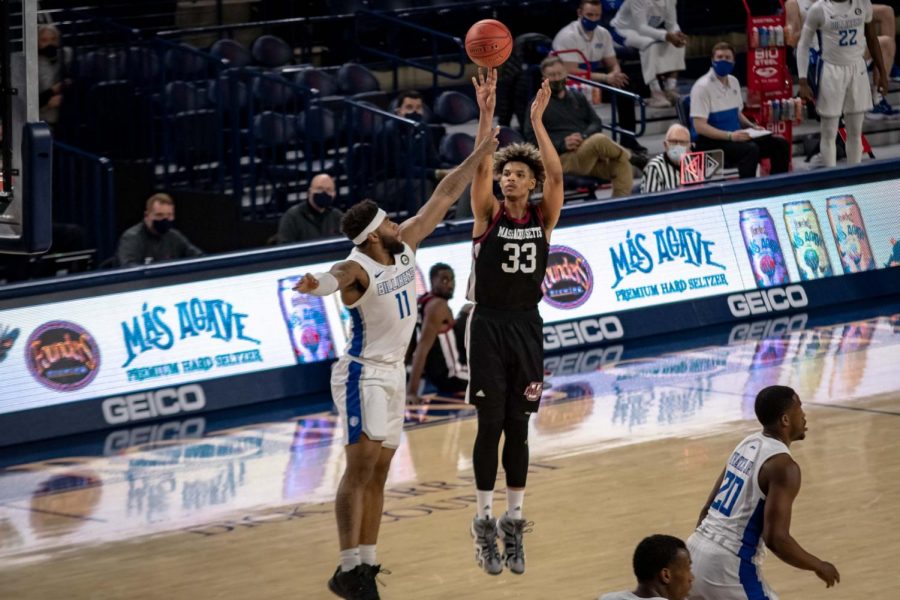 Much unlike Thursday’s dominating 100-66 win over Saint Joseph’s, the Massachusetts men’s basketball team was unable to catch fire from beyond the arc against Saint Louis, falling 86-72. Sophomore Tre Mitchell again carried a large burden for UMass (8-7, 6-4 Atlantic 10), finishing with 30 points.

Mitchell has consistently been the catalyst for the Minutemen throughout his first two seasons. Even with the Billikens (14-5, 6-4 A-10) aware of this, Mitchell continued to make difficult shots look easy in a game where UMass was noticeably the inferior team.

Mitchell finished with 30 points, six rebounds, three steals and a block in the Atlantic 10 quarterfinals, his third-highest point output of the season. Mitchell showcased his scoring on all levels against Saint Louis, finishing 10-of-16 from the floor, including 2-of-3 from beyond the arc and making all eight of his free throws.

Thursday’s game saw Mitchell take a back seat to his supporting cast, such as Ronnie DeGray III, Noah Fernandes, Carl Pierre, TJ Weeks and Javohn Garcia, who all combined for 78 points. That same five-man crew combined for 31 points Friday afternoon against Saint Louis.

The Billikens sent their physicality at Mitchell, with a three-headed monster of Hasahn French (6-foot-7, 240-pounds), Jimmy Bell Jr. (6-foot-10, 270-pounds) and Marten Linssen (6-foot-8, 255-pounds). All three took turns guarding the sophomore on the block.

“I don’t really know how to explain battling those guys,” Mitchell said. “Hasahn is one of the strongest people I’ve ever played against… Jimmy Bell is a big body… you just got to be willing to battle for 40 minutes.”

Perimeter defense was prevalent for Saint Louis, holding the Minutemen to 6-of-21 from the 3-point line (28.6%). Billikens head coach Travis Ford did not want UMass to repeat what they did just 24 hours prior against Saint Joseph’s.

“We got to a point in the game where we were just trying to not give up threes,” Ford said. “So we gave [Mitchell] probably a little too much space.”

Friday’s season-ending game for the Minutemen was also Mitchell’s third 30-point game of the season, scoring 31 in the season-opener against Northeastern and 37 against La Salle.

After suffering a shoulder injury Jan. 24 against Davidson, Mitchell had not played until Feb. 23 against Richmond. Even though he was back playing full minutes after the game against the Spiders, Mitchell still had to take a “mind over matter approach” in terms of dealing with the shoulder pain.

“It’s been bugging me a little bit,” Mitchell said. “But that’s not an excuse for how we performed today, not getting rebounds, things like that.”

Even with another marquee game for the young center, rebounding was something the entire team lacked against the Billikens, who out-rebounded UMass 45-22.

A lot of questions, including Mitchell’s future will have to be answered this offseason for the Minutemen. Head coach Matt McCall would certainly be in a better position with the 2019-20 A-10 Rookie of the Year and likely 2020-21 All-Conference first teamer back on his roster for his junior year in 2021-22.