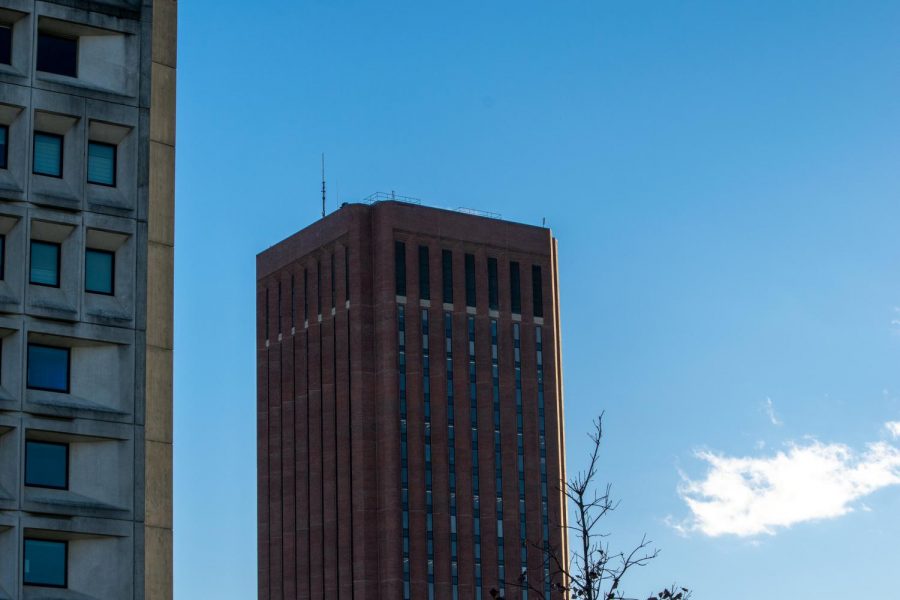 University of Massachusetts students with essential in-person classes feel continued consequences of the forced remote learning during the two-week self-sequester period that started on Feb. 7.

Following a surge of cases in early February, the University increased its COVID-19 risk level from “Elevated” to “High.” For 14 days, on and off-campus students were expected not to leave their homes except to get food, for medical appointments or to get tested for COVID-19 twice a week. This meant all in-person classes for the spring semester were held remotely for two weeks.

Students taking in-person labs often go to class for four hours at a time to complete experiments and develop essential hands-on learning skills that cannot be learned virtually. Junior kinesiology major Lucy Powers said she is taking a biomechanics lab and being in person is necessary.
“There’s really no way to learn how to use that type of equipment without physically doing it and to understand the concepts of the class,” she said.

For students like Powers, fundamental skills that were learned virtually in those two weeks are skills that are built upon throughout the rest of the lab and even students’ careers. Because the self-sequester period took place at the beginning of the spring semester, instead of getting hands-on experience, students in labs watched their professors conduct experiments over Zoom for two weeks.

“If I’d had that first week, back in the lab when I was supposed to, I’d feel more comfortable going into the lab now,” Powers added. “This is only our second week now that we’ve been able to go into the lab, so it’s been very weird to experience it and then still feel like, ‘Oh, well what did I really learn in that first lab?’”

Lab classes also provide students with essential skills for their career. Phoebe Lasic-Ellis, a sophomore pre-med and BDIC major focusing in emergency medical and community health, is taking an organic chemistry lab in person to gain skills needed to enter the medical field.

“It just looks unprofessional if after the undergraduate level if you’re applying for jobs and don’t have any familiarity with certain kinds of techniques, or technologies, or how to do basic procedures for chemistry,” Lasic-Ellis said. “You just don’t absorb what you’re supposed to from the class, and it can compound and become a much bigger problem but you lose out on hands-on learning which is kind of an invaluable experience, I think.”

Lasic-Ellis says she moved on-campus for the main purpose of taking this course.

“I wasn’t thrilled to go back in the first place,” she said. “I kind of wanted to stay home because I just felt like it was going to be very like trapping to be on campus, so losing the one thing that I kind of went back for was definitely frustrating.”

Steve Baiardi, a junior mechanical engineering major, says lab was only one side of the challenges he faced with remote learning during the two-week self-sequester period.

“We just were given a bunch of data and then told to analyze it, and it just took all the fun out of it,” he said.

“A big part of all of our training is morale and understanding of how we work as a team, and we have a disconnect when we have it fully virtual, especially for the newer cadets,” Baiardi said. “Being able to be in that atmosphere, it’s just exciting, and it just really fosters a lot of growth for leadership development, and you don’t get that over virtual.”

Consequences of virtual learning for the ROTC have been lower retention rates, postponed field training (evaluation training), lower morale during physical training, lack of marching drill practice and underclassmen having little experience with subtleties like standing in the position of attention when officers enter a room. As an Air Force leader, Baiardi was involved with plans regarding how to best train new cadets when virtual courses became necessary.

“We had some [contingency plans] and they definitely weren’t thought through well enough beforehand because we just didn’t expect [to go virtual] this quick,” Baiardi said. “It was a shock but we did a lot of last-minute changes.”

“The mental health of students during that time wasn’t taken into account the way that it should have been,” Lasic-Ellis said. “The campus goes on lockdown, everything shut down, people are stuck in their literal rooms and then classes go online and don’t address anything besides that it’s really hard to work — to focus on like an orgo app when you feel like your entire world is changing after a week of being on campus.”

Seniors also fear class being turned virtual indefinitely as they prepare to embark on their careers in the upcoming months.

“As much as being in person requires me to focus up more and requires me to apply myself a little bit harder, I look forward to doing it, because it’s a break from being at home and it feels good to be back on campus,” said Griffin Seidel, a senior microbiology major.

“If it were to go online indefinitely, I guess I would just have to tough it out and hope that I came away from the classes with something, because a lot of these lab courses, as soon as it went back in person, I started learning some new techniques I’m going to be required to know for jobs,” Seidel said. “So it would definitely suck to come out of this lab with knowledge of what we were supposed to be doing, but no hands-on experience with it.”