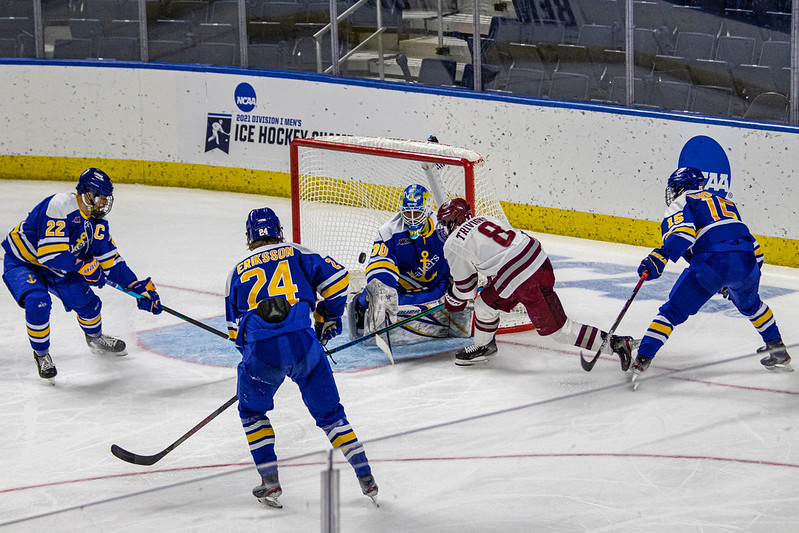 BRIDGEPORT, Conn— The Massachusetts hockey team kept its season alive and its team together on Friday, picking up a 5-1 win over Lake Superior State to advance to the regional finals.

“They’ve got a big defensive core playing on a smaller sheet than we have in the last couple weeks,” UMass coach Greg Carvel said after the game. “We knew it was going to be a grinding game.”

The first frame set the pace for the full 60. Both teams displayed aggressive and heavy checking, and the Minutemen needed to get greasy goals that Carvel mentioned all season long.

And midway through the period, Jake Gaudet did exactly that. The captain won a physical battle in front of the net and put himself in a perfect position to clean up a loose puck in front and bury it in the back of the net to take a 1-0 lead.

But late in the period, UMass was struggling uncharacteristically in transition. It allowed a few different odd-man rushes in favor of Lake Superior, who took advantage of one late in the period to even the game back up.

“We were sloppy,” Carvel said. “We gave up way too many odd man rushes… In a grinding game there was a lot of odd man rushes and that’s not good.”

After the first period adjustments, the Minutemen got back to their brand of hockey, limiting high percentage scoring chances in transition and in the defensive end. And once they did, the momentum shifted in their direction and stayed that way for the final 40 minutes.

UMass controlled the pace in the middle frame and continued to win battles in front of the net, with Josh Lopina getting the puck on his stick and sliding it past Lakers goaltender Mareks Mitens to regain the lead.

“That proved to be the difference,” Carvel said of the puck battles. “We scored in front of the net early in the game which set the tone.”

And just a minute later, Ty Farmer found Carson Gicewicz all alone in the right circle, and Gicewicz quickly finished before Mitens ever had a chance to get back to his opposite pipe. Just like that, the Minutemen were cruising.

A third period tap-in goal by Gaudet depleted any of the energy Lake Superior still had, and Anthony Del Gaizo’s empty netter was merely icing on the cake for the Minutemen, who already had the game well in hand by that point.

One bright spot in UMass’ win was Filip Lindberg, who anchored the defense through its early struggles and kept the momentum from swinging back towards the Lakers once the Minutemen took the lead.

“I haven’t given Filip Lindberg a lot of credit down the stretch, but he deserves it all tonight,” Carvel said. “He was outstanding when we were not great.”

Despite the final score, UMass has plenty to improve on mentally in a short period of time, namely getting back to the disciplined hockey that it displayed for most of the season.

“We were pretty casual with the puck too often tonight, mentally not as sharp as we usually are,” Carvel said. “Took [six] penalties, I don’t know if we took [six] penalties all through the Hockey East playoffs, so to me that was indicative that we weren’t quite where we needed to be.”

The Minutemen will be back on the ice in Bridgeport tomorrow evening for a matchup with Bemidji State, with a Frozen Four berth on the line. Faceoff is set for 5 p.m.

Colin McCarthy can be reached at [email protected] and on Twitter @colinmccarth_DC.