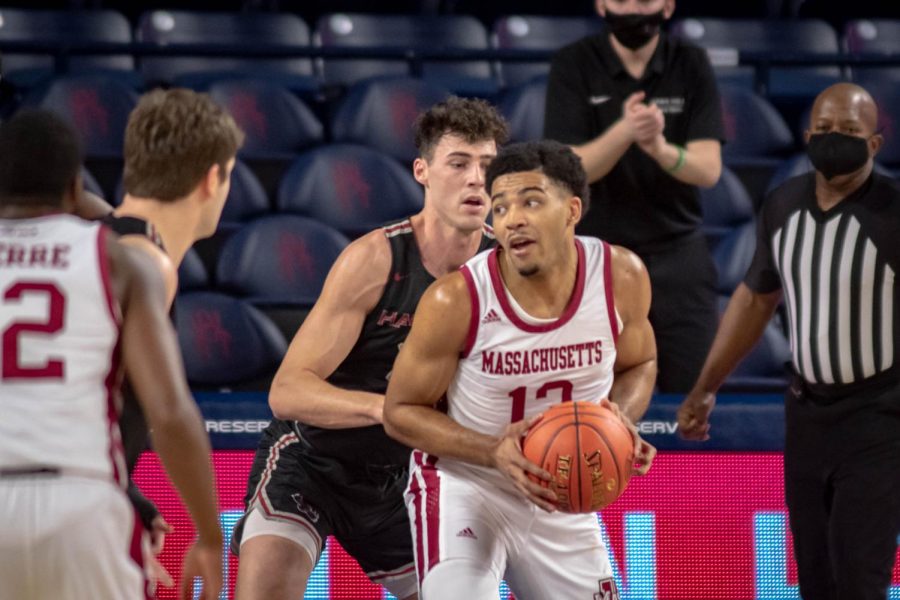 After a crushing loss to Saint Louis on the road in the regular season finale, the Massachusetts men’s basketball started off the Atlantic 10 Tournament with a bang defeating Saint Joe’s (5-15, 2-9 A-10) by a score of 100-66, becoming the fourth team in conference history to score 100 or more points in the tournament.

“I thought us getting off to a great start today was extremely important,” said UMass coach Matt McCall. “We got it going there early with Ronnie [DeGray III] in the start of the game, it’s interesting and this is not to put pressure on Ronnie by any way because I think he is a terrific player for us, but when he plays well, we generally play well…when you look at the games we have won this year, he plays well. Us getting off to good start today was important for us.”

McCall emphasized in his weekly presser before the game Thursday about just how good of a practice the team had on Wednesday. UMass knew they had a challenge in their upcoming game going up against the Hawks who recently got the return of their best player four games prior.

“We found the open man,” McCall said. “The ball moved. We weren’t at all stagnant, we weren’t trying to play robotic. We found the open man and I think we are at our best when we are doing that. I also think we got a lot of transition opportunities. Again, our offense started with the defensive focus. We were able to get stops, which got us out on the break, and we were trying to find each other.”

The Minutemen will have their hands full. Enjoying the victory over the Hawks only comes for a brief time period until the realization that they are going up against one of the top teams in the conference. Saint Louis handled UMass on Monday with ease, showcasing its ability to produce scoring from its starters and the bench.

Scoring off the bench has been a struggle for UMass this year. Majority of its scoring has come from the likes of Tre Mitchell, Noah Fernandes, and Carl Pierre. And it has been a given that without Mitchell on the floor, the offense can slide into a rut. Friday’s contest is against Saint Louis who have the same ability to replicate what UMass did to Saint Joe’s.

“Honestly I think our confidence is through the roof right now,” Mitchell said. “We understand that Saint Louis is a difficult opponent and they are tough on all aspects on the court. They got a lot of dudes who can go so we are just focusing on playing hard and playing our game.”

McCall has been able show versatility in his lineup combinations this season. The four players who have been at the core of the starting five have been Fernandes, Mitchell, DeGray III and Pierre. TJ Weeks and Javohn Garcia have been intertwined here in there depending on defensive matchups along with Dibaji Walker playing a role in the starting five with his defensive skill set.

Garcia started against the Hawks and showed why he can play in the starting five. The freshman finished with 17 points on 7-of-9 shooting from the field. His ability to play off the bench is key.

Outside of the starting five and Weeks, the rest of the bench accounted for seven points against the Hawks. McCrory couldn’t add the scoring in his 14 minutes of action, but his contribution and defensive ability will be leaned on a lot against the Billikens on Friday.

McCrory stepped up in the absence of Mitchell and Fernandes when the Minutemen beat URI on the road finishing with 11 points and 11 rebounds. Replicating a performance like that against Saint Louis will help keep the game within reach.

UMass takes on the Billikens in the quarterfinals of the A-10 Tournament Friday with tipoff scheduled for 1 p.m.