UMass had no answers for Villanova’s offense on Friday night 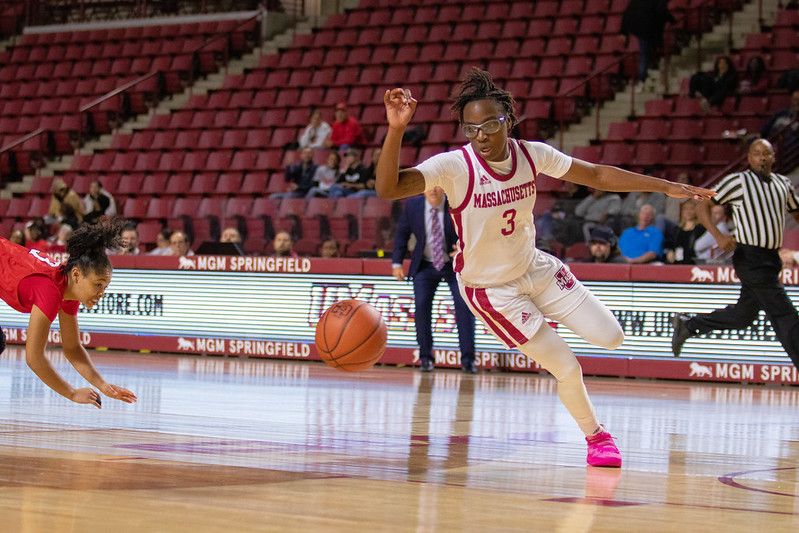 In the first round of the Women’s National Invitational Tournament, the Massachusetts women’s basketball team had no answers for Villanova dominant offense.

What looked like a lively team all weekend long in Richmond, was not on full display on Friday night in Charlotte when the Wildcats took control on every level of the game.

The Minutewomen threw a zone at the Wildcats, which made no impact on their three-point threats and guards who had a strong ability to dribble penetrate.

“We did not execute our game plan,” head coach Tory Verdi said. “Coming in we wanted to pressure whoever had the ball…and we did not do that. We allowed them to pick us apart with their passing.”

Villanova forward Madison Siegrist outscored the Minutewomen alone in the first quarter with 13 points over UMass’ 12. In the first half, Siegrist went 3-for-4 from behind the arc, with four rebounds and two blocks.

Verdi gave Siegrist the credit her performance deserved. Describing how much of a “pro” she is, even as a sophomore.

UMass uncharacteristically had no 3-pointers in the first half at all, going 0-for- 5 from downtown. That stat did not improve as the Minutewomen went 0-for-11 from the 3-point line. Every time Destiney Philoxy tried to get some production, white jerseys prevented any layups and clogged the lane, giving the Minutewomen minimal chances to succeed.

If it wasn’t for Sam Breen’s buzzer beater layup to end the first half, Siegrist would have outscored UMass again. Breen’s layup made the score 39-21, whereas Siegrist herself ended the half with 20 points. Siegrist finished the game 32 points. The Wildcats shot 48% from the field in the first half.

Villanova picked up right where it left off when the third quarter began, responding to Philoxy’s layup with another 3-pointer and layup right away.

As much as the Minutewomen attempted to find some success, it was rather impossible against a team that finished the night 13-for-24 from the 3-point line.

“You have to give them credit, they were really good,” Verdi said. “Their size bothered us a lot, their length bothered us. Layups, we missed whether in a transition or rebound put backs. Even their activity on post touches, Sam [Breen] tried to post up, we were intimidated to throw the ball to her because of their activity level. Getting their hands on passes and what not.”

The score may show a big loss, but that was not Verdi’s biggest disappointment.

“I was just disappointed because we did not play UMass basketball,” Verdi said. “I think tonight we just got sped up, played against a really good team and we got frustrated. Instead of coming together, I think we tried to do things on our own, and we were a little fractured.”

UMass plays in a consolation game Saturday, which gives the Minutewomen one last chance to take the court this season.

“I’m just happy that was our last game because I don’t want to remember this game,” Verdi said. “I want to be able to play again tomorrow and be a little bit more productive than we were here today.,”

Both Sam Breen and Verdi expect to get back to be who they are on the court tomorrow, through communication, being systematic on both ends on the ball and overall get back to Minutewomen basketball.

Tipoff is set for 2 p.m. on Saturday.