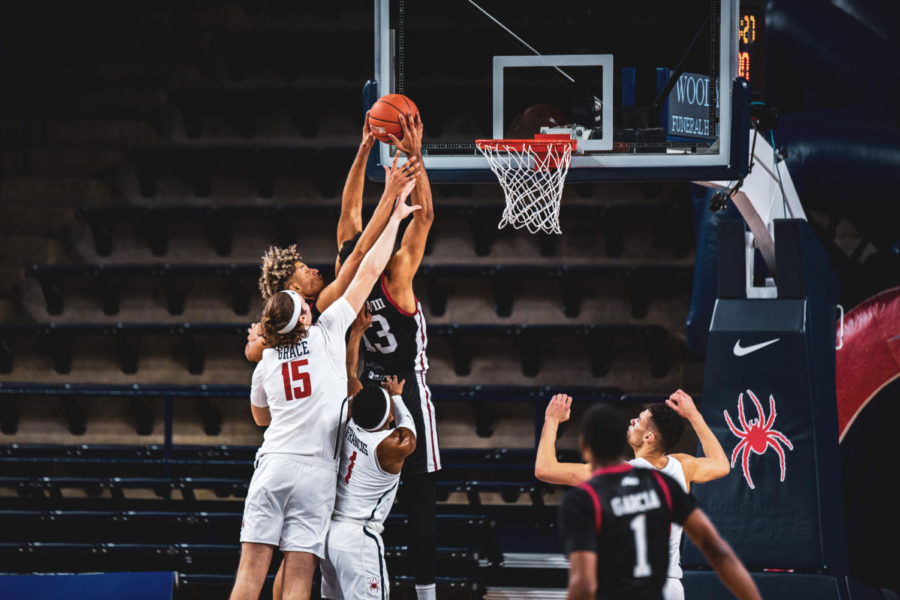 The chaotic and frenzied Massachusetts men’s basketball season came to an end Friday when it lost to Saint Louis in the quarterfinals of the Atlantic 10 Tournament by a score of 86-72.

UMass (8-7, 6-4 Atlantic 10) came out flat in its opening minutes against the Billikens (14-5, 6-4 A-10). The slow start to the game for the Minutemen led to a comfortable lead for the Billikens who never really felt the pressure of a comeback mounting. There were spurts throughout the second half in which UMass cut the lead to single digits, but the Billikens quickly followed that up with a run of their own stretching out the lead even further.

“I just thought we were a little just slow [in the opening minutes],” UMass coach Matt McCall said. “Almost just sleeping. One o’clock game, we came out yesterday with the mentality and focus to get back to the hotel. You watch film, you walk through, you try to send them to bed early. I’m sure they are tossing and turning, and you got to wake up today and be ready to go. I just thought Saint Louis, they woke up today like we woke up yesterday.”

From that point onward, the Billikens kept their foot on the gas pedal and cruised out to a comfortable lead in the first half thanks to performances from the likes of Jordan Goodwin and Yuri Collins. UMass had no answers for Collins who tied his season-high in points on Thursday.

“Yuri Collins, he is extremely tough but based on the numbers he doesn’t look to score very much,” McCall said. “To start the game, we were going to double off [Collins] and go get the ball out of Hasahn [French’s] hands because of the game he had against us in the last matchup, and we had success yesterday doing that. Doing that is a short prep, but [Collins] hits a three to basically start the game and I don’t know how many he has taken all year, but it isn’t many.”

The one bright star for UMass in the opening half was Tre Mitchell. The sophomore was playing in his first A-10 Tournament and coming off a 15-point performance in the second round.

Against Saint Louis, Mitchell showed why he was the reigning A-10 Rookie of the Year in the 2019-20 season. Going up against French, who is known to be one of the most physical power forwards in the country, Mitchell didn’t back down and tried to make his presence felt in the paint. He finished with 30 points, the third time this season he has reached that mark and finished going 10-of-16 from the field along with 2-of-3 from deep.

“It was win or go home,” Mitchell said. “I had to leave everything out on the floor and I had to do what I could.”

Outside of Mitchell, UMass couldn’t generate any other form of scoring. The bench attributed for 13 points, with nine of those points coming from TJ Weeks. It was much different from the slugfest of scoring that UMass produced against Saint Joe’s. Behind Mitchell was Javohn Garcia who put in another solid performance for the Minutemen. Garcia finished with 11 points on 4-of-9 shooting from the field. Garcia and Mitchell were the only players on UMass who finished in double digits of scoring.

In the second half, UMass kept trying to crawl back into the game. A 3-pointer made by Carl Pierre cut the lead down to eight with 8:39 remaining and it looked like the momentum could be shifting towards UMass. After the 3-pointer made by Pierre, the Billikens quickly went on a 7-0 run and the lead was back up to 15. From that point on, Saint Louis comfortably finished out the game thanks to dominant performances by Goodwin, Collins and Javonte Perkins.

The trio of Collins, Perkins, and Goodwin combined for 60 points in the win against UMass. The 14 rebounds grabbed by Goodwin was a killer to UMass’ tempo and flow of the game.

“Someone is going to give [Goodwin] a crack at the next level,” McCall said. “And I’m not talking overseas, I am talking the big boy, the NBA. Because of how big he is, how physical he is, his ability to rebound and his ability to make the right play. The NBA is people built like him. Bradley Beal is that size. The reason we got hurt on the glass is because of how big and physical they are, there is no real other secret.”

Saint Louis outrebounded UMass 45 to 22. They beat the Minutemen on the defensive and offensive glass and controlled the flow of the game. Each defensive stop for UMass seemed to be another rebound snatched by the Billikens that just killed any sort of momentum that the Minutemen were trying to build up to come back.

UMass’ season ended as it got knocked out of the A-10 Tournament in the quarterfinals. The Minutemen finished 5th in conference standings this year.