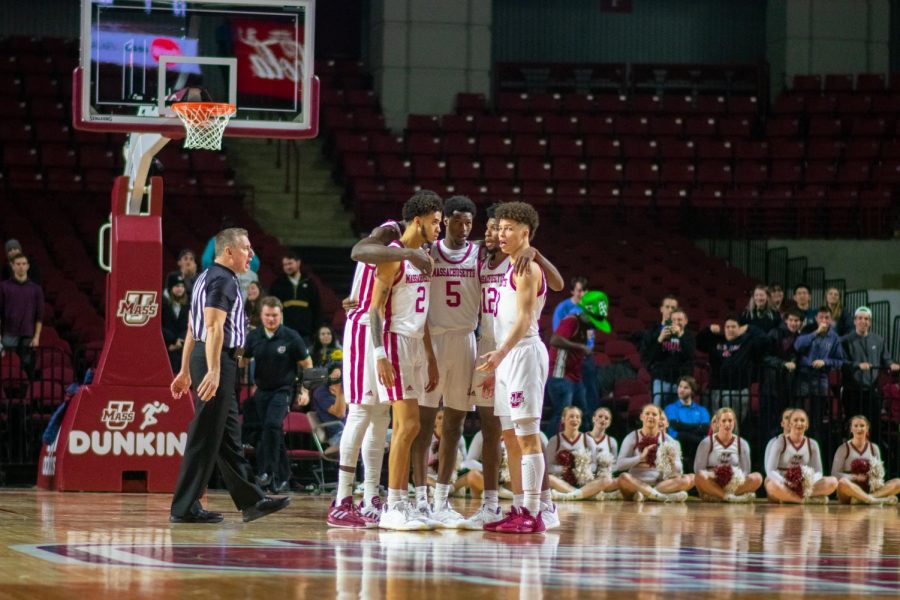 When it takes the floor for the regular season finale on Monday evening, the Massachusetts men’s basketball team will do so with the fate of its season in its hands.

With a win over Saint Louis, the Minutemen (7-5, 6-4 Atlantic 10) would secure themselves a top-four seeding and a double bye slotting them into the quarterfinals of the Atlantic 10 tournament for the first time since 2008.

With a loss they would fall into the fifth or sixth seed depending on other outcomes across the conference, earning a single-round bye and would take on a winner from the No. 11-14 seeded first round games.

Ahead of taking on the Billikens (12-5, 5-4 A-10) UMass is embracing the uncertainty of its tournament placement much like they have been forced to do all season long.

“You’ve just got to take things one day at a time, not looking too far into the future,” center Tre Mitchell said. “Once we figure out who we’re playing, we’ll worry about it then.”

In what should be a playoff atmosphere, Monday’s matchup with Saint Louis will present the Minutemen with their toughest test of the season. Saint Louis ranks 49th in all of college basketball in net ranking. Richmond, whom UMass lost 79-65 to on Feb. 23, currently ranks 53rd.

The only two A-10 opponents who rank higher are Saint Bonaventure (28th) who clinched the conference regular season title, and Virginia Commonwealth (38th). Both Saint Bonnies and VCU had regular season matchups against the Minutemen cancelled.

Despite the consequences of Monday’s finale, UMass is staying grounded on the opponent ahead of them, not worried about potential tournament foes.

Like Richmond, the Billikens are led by a veteran attack of guards Javonte Perkins (16.9 points and 10.2 rebound per game) and Jordan Goodwin (14.6 points per) and forward Hasahn French (7.2 rebounds per).

“Just preparing for [Saint Louis] is tough when you have a lot of guys that can score, create, rebound and do a lot of different things,” Fernandes said. “I think we match up well with them because we have sort of the same weapons. I think it’s going to be a real hard-fought war on Monday.”

Across the two matchups, the trio of Perkins, Goodwin and French totaled 92 points. With even larger roles carved out in their senior seasons, expect a heavy serving of the trio on Monday.

“Had [Saint Louis] not been paused for as long as they were and miss the amount of league games that they did, they’re an NCAA Tournament team no question with what they did in the [non-conference games].”

After Monday night’s game against the Billikens, the Minutemen will travel directly to Richmond for the conference tournament which starts on Wednesday, March 3.

With their seeding unknown heading into the regular season finale, and a year removed from a last-minute cancellation of the 2020 Atlantic 10 Tournament in Brooklyn, the Minutemen are ultimately just looking forward to the opportunity to compete, rather than worrying about seeding and byes.

“The same thing could happen this year” Mitchell said. “We could be out there ready to tipoff and it could get taken away from us just like it did last year. We just have to stay present and take it one step at a time.”