Minutemen have yet to give up a goal this season 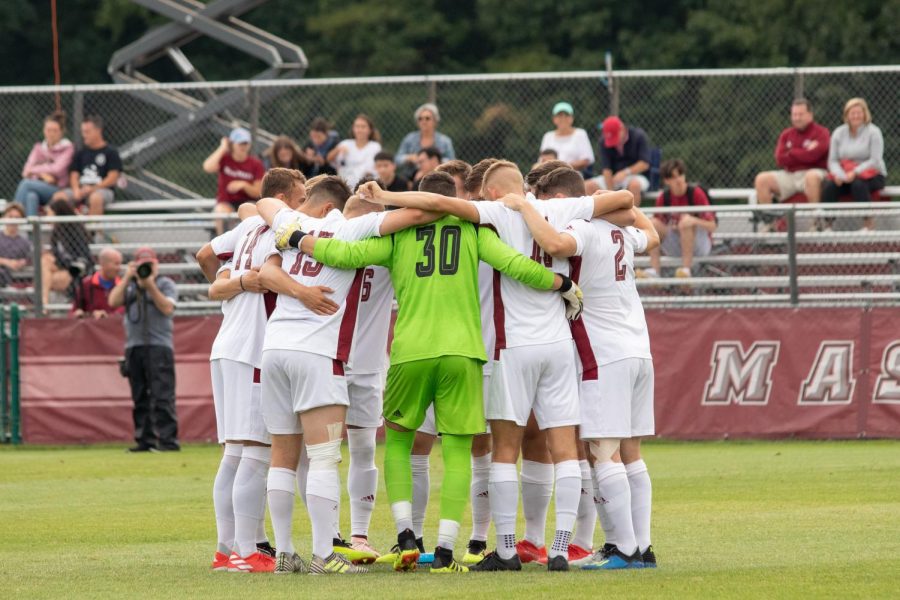 It was another commanding win for the Massachusetts men’s soccer team, who cruised to a 3-0 victory over Albany.

UMass (3-0) benefited from three different goal scorers against Albany (0-3-1, 0-2-0 America East) and came alive in the second half to put the game to rest.

“I thought the team played well today,” UMass coach Fran O’Leary said. “Everybody we played, everybody off the bench, a lot of young guys came in and all handled it very well. Delighted to get a win, another clean sheet and it was great to get everybody involved. Everyone that came in gave us something, gave us a little lift and were worthy of the time they got.”

Three straight clean sheets and wins for the Minutemen can be attributed to the strong defense and goalkeeping that has kept them in line to start the season. Keeper Marvyn Dorchin was strong in the net once again but didn’t face much action. Dorchin managed to save the only shot on target for Albany, which came in the 39th minute of the first half.

The back line for UMass was strong in keeping Albany’s attack limited. Albany only managed to put one shot on target for the whole game and recorded another two shots altogether. Defender Eli Cronin notched in a goal for himself and put in 77 minutes of work. Cronin, along with Nathaniel Cardoza, Shawn Allien and Shamar Rainford played a crucial part in maintaining another clean sheet for UMass. Rainford was called in for his first collegiate start of his career. All defenders averaged 85 minutes against Albany.

“Nate and Shawn went in at center back and both of them did a fantastic job,” O’Leary said. “Our full backs as well, Eli scored a fantastic first goal and Shamar came in for his first college start and played a vast majority of the game and I thought he had an outstanding game.”

Cronin got the scoring going for the Minutemen in the 30th minute thanks to an assist that came via a corner from Ben Shepard. Cronin headed the ball into the right side of the net to give UMass a 1-0 lead. The game stayed 1-0 up until a burst of scoring came from UMass in the 68th and 77th minute. Goals from Filippo Begliardi Ghidini in the 69th minute and one from Tyler Mann in the 78th minute gave UMass a comfortable lead to hold onto. Both goals were assisted by freshman Alec Hughes who recorded his first career assists for UMass.

“Alec was very good all day,” O’Leary said. “He takes himself into good positions. He was a little unfortunate in the first half, his touch got away from him once or twice after getting into really good positions and he just kept on going. He is an intelligent player and a strong runner with the ball. Delighted that he got a couple of assists today. He feels there is goals in him, the goals will come. He is making a valuable contribution to the team right now.”

Begliardi Ghidini has been a focal point of the Minutemen’s attack this season and has been a threat to opposing sides up front. The graduate transfer from Merrimack has been dominant up front, producing eight shots throughout the season and two goals through three games so far.

“[Begliardi Ghidini] brings a lot,” O’Leary said. “He is a mature guy. He is an intelligent young man who gives everything to the team. He is a good finisher and we look forward to him scoring some more goals as we get into the meat of the season.”

UMass takes on Fordham in Amherst next Saturday with kickoff set for 4 p.m.