UMass men’s soccer improves to 2-0 with an impressive defensive performance vs. Hofstra 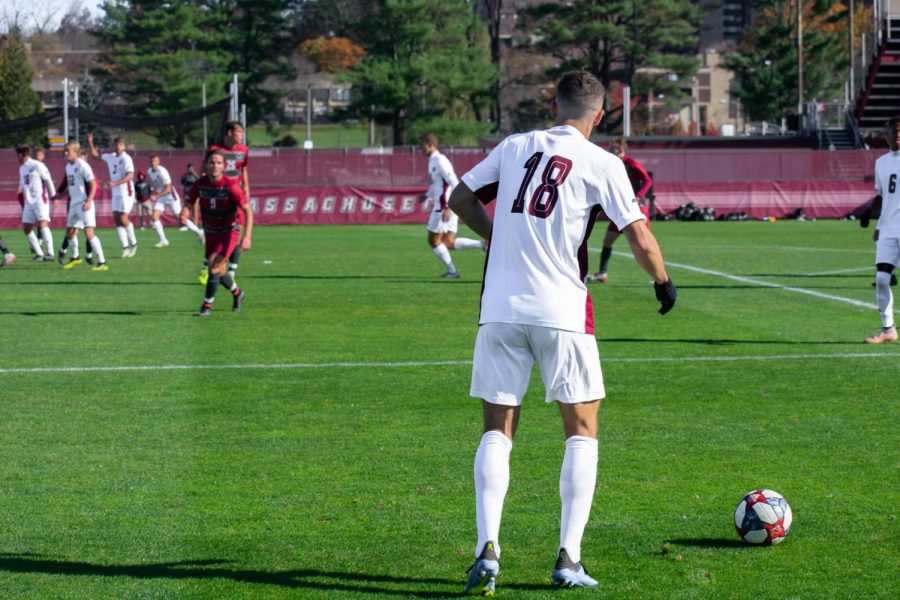 On Wednesday night, the Massachusetts men’s soccer team went up against Hofstra. Coming off a strong showing against Northeastern that saw the Minutemen win 2-0, UMass put together another impressive performance against the Pride to win the game 2-0.

It only took 85 seconds for sophomore Logan Brown to score the first goal of the game. It was the Logan Brown show for the beginning of the game as he had another critical play on the defensive end when he bicycle kicked a shot that would have been a goal if not for his heroic play.

Playing suffocating defense was the theme of the night for UMass (2-0). The defensive tone was set and carried throughout the match by senior goalie Marvyn Dorchin who had six saves, four of which came in the second half. Dorchin made some great plays, like saving a few point-blank shots and fending off a late-game penalty kick.

“Marvyn is carrying on from last season… tremendous play and so consistent…He’s growing into a top college goalie,” head coach Fran O’Leary said when asked about Marvyn Dorchin’s performance on Wednesday night.

The defensive intensity that the Minutemen have put on display has been a positive for the coaching staff. O’Leary believed going into the season that the offensive side of the ball would not be an issue. Instead, he was concerned about “making goals but giving them away cheaply.”

On the other side of the ball, UMass’ attack was impressive, especially when midfielder senior Yosuke Hanya facilitated it. Hanya didn’t waste any time against Hofstra (1-2) as he displayed speed, passing, touch and skill the whole match. Hanya finished the game with three shots on goal and arguably the most critical play of the game when he assisted James McPherson’s game-sealing goal with 7:15 left on the clock in the second half.

On the other hand, Hofstra had a lot of chances to score and just couldn’t seem to find the back of the net all game. How many chances? Twenty-two to UMass’s 13 shots. The Pride also had 10 corner kicks as opposed to the Minutemen’s seven. Interestingly enough, both UMass and Hofstra each had seven shots on goal. Although Hofstra did have more opportunities to score, it just couldn’t capitalize on those pivotal moments.

“As a group tonight, it was a very good win against a mature team,” O’Leary said.

Overall, the Minutemen were able to fend off a disciplined, well-coached, and experienced Hofstra team. UMass will look to continue its early-season success against Albany on Sunday at 4 p.m.

The Minutemen will remain at home for their next four games and look to carry the momentum as a team into the rest of their season.

“We have an honest team and group of guys,” O’Leary said. “We know we’ll get effort and energy…we are looking to get better and better as the season goes on.”

Pablo Quiceno can be reached at [email protected]