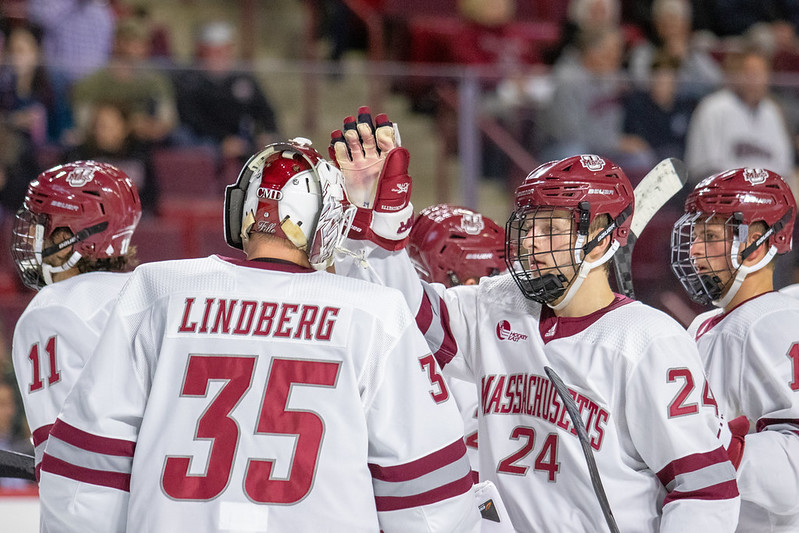 The Massachusetts hockey team advanced to the semifinals of the Hockey East Tournament with a 4-1 win over Northeastern on Sunday.

In the long-awaited quarterfinal matchup, head coach Greg Carvel had a simple game plan: play good defense and stay out of the penalty box. The Minutemen were the least penalized team in HEA during the regular season, and against one of the best power play teams in the country, the less time spent in the box, the better.

Defense turned into offense right away for the Minutemen when assistant captain Bobby Trivigno found Garrett Wait racing towards the net. Wait received the puck and buried his eighth goal of the season just under three minutes into the first period.

“Scoring first was big,” Carvel said after the game. “We came out, set the tone and got a goal early, and I think that was good for our mojo to know that we showed up to play tonight.”

UMass continued to lay the pressure on Northeastern, when once again Trivigno earned an assist, this time finding NHL prospect defenseman Zac Jones, who converted a 4-on-1 rush into a 2-0 lead halfway through the frame.

But the Minutemen offense stalled out and failed to score a goal for almost 30 minutes of ice time after Jones’ goal, allowing the Huskies to cut the lead in half and shift the momentum in their favor.

That was until the waning seconds of the middle frame, when the facilitator Trivigno grabbed a goal of his own, allowing UMass to head to the locker room with its two-goal lead from the first still intact.

And while the game was still within striking distance for Northeastern, Philip Lagunov stepped up and helped put the score out of reach. The senior battled three Huskies for the puck in the offensive zone and came back to clean up Anthony Del Gaizo’s rebound and put it in the back of the net for his third of the season.

“That was a huge goal by Phil, I’m really happy for him, he’s had an up and down year,” Carvel said. “Looked like he won a battle around the net to put the puck away and put the game away.”

Lagunov picked a good time to step up for the Minutemen, as they were short forwards and needed to use defenseman Gianfranco Cassaro, who recently entered the transfer portal after not being able to crack the rotation, on the third line.

And with that lack of forward depth, defense became even more important. UMass has leaned heavily on its strong backend all season long to stay sound defensively as well as generating scoring, and they delivered on that once again.

Filip Lindberg made 25 saves and only gave up one goal on the game. His blue liners helped make his job easier by taking pucks away in transition and refusing to allow many high-risk scoring chances.

“We’re the best defensive team in Hockey East this year, that’s what we want to be,” Carvel said. “We want to be a good defending team because good defense leads to good offense.”

With only a few days to prepare, the Minutemen will move on quickly to their semifinal matchup against Providence on Wednesday. And after Boston University was upset by UMass Lowell on Sunday, UMass will get another chance to host a playoff game, against a team it badly beat a few weeks ago.

“We’re going to take that 8-1 win out of our mind and understand that they won handily today,” Carvel said. “And they’ll be looking for revenge and I imagine it’s going to be a really grinding hockey game.”

Colin McCarthy can be reached at [email protected] and on Twitter @colinmccarth_DC.