UMass scores in overtime to remain unbeaten in conference play

Olivia Gouldsbury scores her first goal of the season 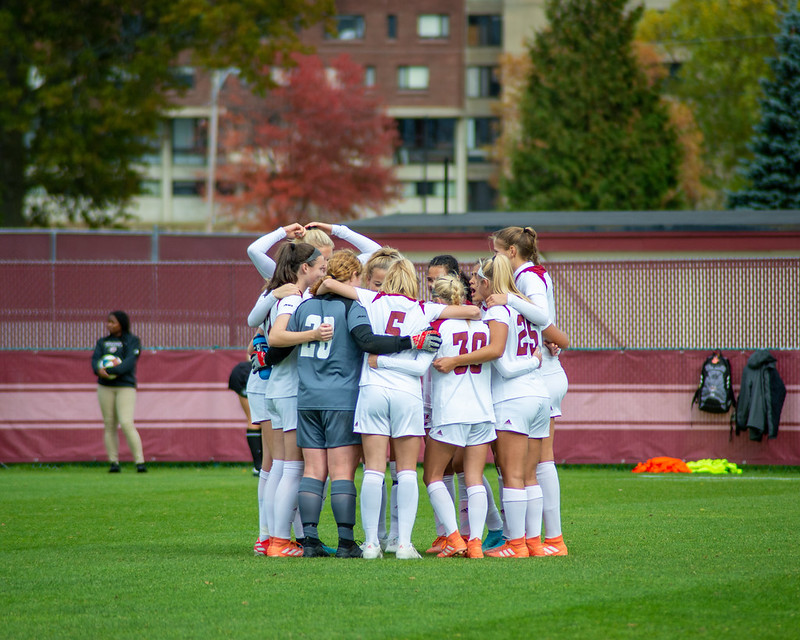 The Massachusetts women’s soccer team once again displayed incredible patience and defensive resilience in a 1-0 overtime win against Rhode Island on Sunday. Olivia Gouldsbury scored her first goal this season in the 100th minute of the game from a cross into the box by Serena Ahmed.

UMass (5-2-1, 4-0-1 Atlantic-10) dominated the game in terms of passing and possession. It held the Rams (1-7-2, 0-3-2 A-10) to eight shots and just two on goal, while producing nine shots and five on goal themselves. Bella Mendoza made two saves in her first full game this season.

The team talks –– before the game, at halftime, and before overtime –– consisted of drawing up ways to get by the URI back line. One of the ways they decided to address this was by switching the role of Ahmed late in the game. Usually a defensive player, Ahmed was pushed upfield to provide a spark offensively. Her assist was the sophomore’s first goal involvement of the season.

“She played outside back for most of the first half, and to start the second she was in the back as well,” said Minutewomen head coach Jason Dowiak. “Then later on, we pushed her up into a winger’s role and she ended up getting the assist on Olivia’s goal, so she definitely made an impact in a different way than usual.”

The pouring rain and harsh wind posed a new challenge for the UMass, who just Thursday was playing in 70 degree heat. As has been the case in recent games, the Minutewomen pushed for a late goal and managed to secure the victory.

“The conditions were miserable,” said Dowiak. “It didn’t start raining until we kicked off. It was non-stop, except for maybe five minutes of the game. But this group just keeps finding a way. It’s awesome.”

Along with the win came UMass’ 5th clean sheet this season, four of those coming from the past five games. The Minutewomen continue to favor a “shut-out” approach: a major deviation from last season’s style of play, which emphasized creating plenty of offensive chances.

“[The change in style] has a lot to do with personnel,” Dowiak said. “We went from playing in a 3-5-2 and being very attacking-minded to playing a 4-2-3-1. [Now] we have six players whose main priority is protecting the space near the goal. But while we have the ball, they can still be creative and get advanced.”

“Now that they [the players] have seen us succeed and get shut outs, and not give up a lot of chances, I think they’re as excited about keeping the ball out of the net as we were in previous years about putting it in the net,” Dowiak said.

“It was so hard to get comfortable at the beginning of the season because of COVID, new players, not having a lot of time together, the pause at UMass with the surge in cases. It was hard to get a rhythm going. [Now] we’re getting players back healthy and fit, and everything we want to do is getting a lot easier. So I’d say I have a lot of confidence even though we’re not creating as many chances as we did on average in previous seasons. I always feel like the goal is going to come. We don’t need to score three goals, we only need to score one because the group is really committed to the defending side too.”

The Minutewomen will battle St. Joseph’s (2-5-2, 1-3-1 A-10) in Philadelphia at 6 p.m. on Wednesday. The Minutewomen were victorious in their last outing against the Hawks––a dominant 1-0 victory on March 25.