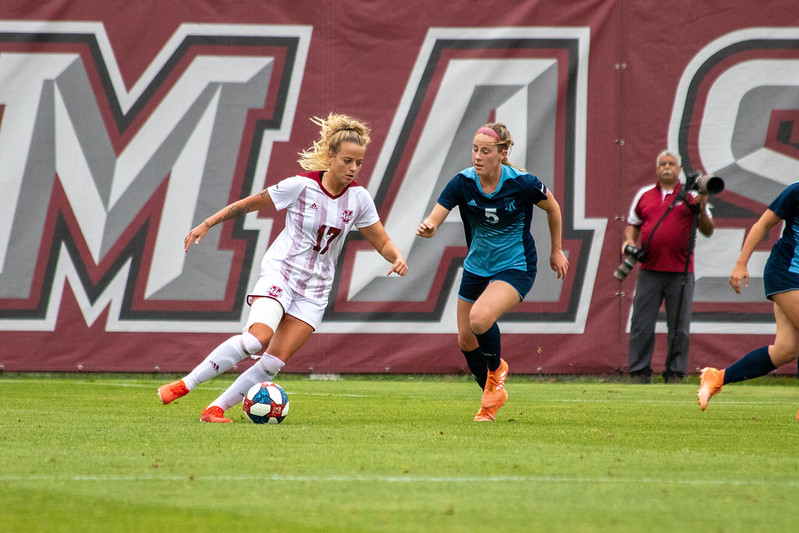 In its third home game of the season, the Massachusetts women’s soccer team narrowly missed overtime with a late goal, winning 1-0 over St. Joseph’s and remaining towards the top of the A-10 standings.

“For Jenny to get the goal on her first game back in after coming out of her concussion and a great goal. That was not an easy finish,” UMass head coach Jason Dowiak said. “She is just so special in moments like that.”

During the game against La Salle, Hipp hit her head against the knee of a player and was out for a week due to concussion protocol. After resting for a few days, she returned to practice.

“I was just excited to be back on the field to help the team,” Hipp said. “I knew Hannah would get the ball into the box and I just instinctively went for it.”

The Minutewomen have struggled with injuries this season. Hipp made her return this game, and Olivia Gouldsbury played after dealing with a quad injury. Captain Fatou Barry has been sidelined since the game against UMass Lowell earlier in the month but has begun to train and is hopeful to return to the lineup soon.

UMass rose to the challenge Thursday, starting the game strong. The Minutewomen controlled most of the possession but were unable to convert in the final third of the field for most of the game. Saint Joseph’s goalkeeper Katie Cappelletti fought off any shots in the first half.

“The energy that we had in the warmup and the tactical approach to be a little more aggressive going forward early in the game really helped set the tone in the first half,” Dowiak said. “Our energy to start the game was the best that we have seen from the team so far.”

Alyssa Chase started the game in net for the Minutewomen, playing the first half. Bella Mendoza began the second half and had a diving save, preventing an opportunity for the Hawks. The defense also helped protect the net, intercepting many passes and preventing potential breakaways for Saint Joseph’s.

“I know that we are so complex in our level of playing and everyone who steps on the field gives 100 percent,” Hipp said. “We play for each other. We fight for each other. And I really think it’s the winning mentality that we have right now.”

This is UMass’s third game in a row, with every game ending in a late goal. Most of the opportunities offensively have been off of set pieces.

“I think we are not creating as many chances as last year, but we are more efficient,” Hipp said.

“You only need one goal to win the game if you don’t concede any.”

The Minutewomen will travel and continue with A-10 play on Sunday against Rhode Island. The match is set to begin at 1 p.m.

Sophie Weller can be reached at [email protected]