UMass utilizes its strong defense to win Hockey East crown, just as it did all year long

UMass needed a shutout to beat UMass Lowell for the Hockey East title on Saturday, but its right in line with how its won all year. 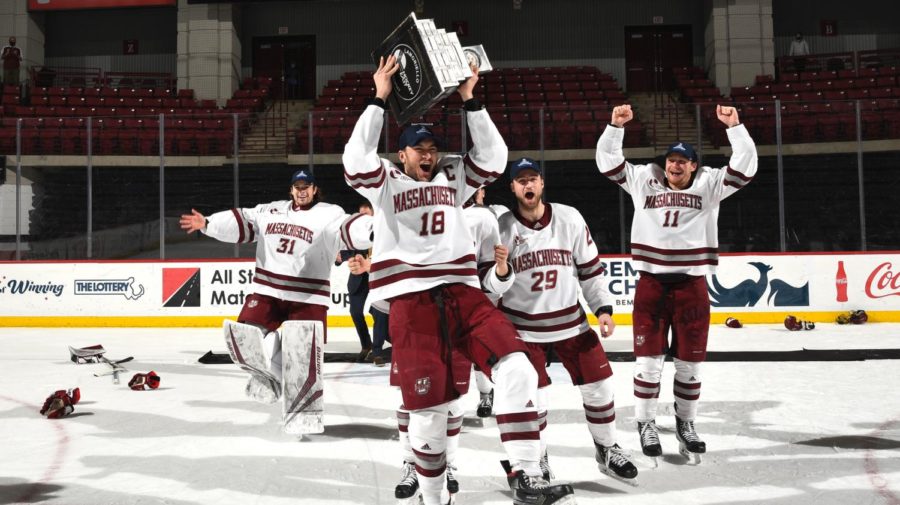 With 6.5 seconds left in the Hockey East Championship, the Massachusetts hockey team lined up for a defensive zone faceoff, clinging to a 1-0 lead.

With its goaltender pulled, UMass Lowell (10-9-1, 10-9-1 HEA) won the draw back to Charlie Levesque who fired a one-timer on net from the high slot. Before the puck even had a chance to challenge UMass (16-5-4, 16-5-4 HEA) goaltender Filip Lindberg, Oliver Chau sprawled to the ice, stopping the puck in its tracks. With the stellar defensive play, the Minutemen cleared the puck and embraced, celebrating the programs first-ever Hockey East Championship.

After the first 59 minutes and 53 and a half seconds of hockey, its no wonder UMass once again relied on a defensive play to take home the hardware. Time and time again, the River Hawks found themselves face-to-face with Minutemen d-men, unable to establish themselves in the offensive zone.

The UMass defense managed to hold a UML team that had tallied 13 goals in its previous three playoff games scoreless, letting just 16 shots even get to Lindberg.

Even when shots did test Lindberg, he was equal to the task. The junior netminder stopped all 16 shots he faced including two instances late in the third where he kept River Hawks from jamming home loose pucks in the crease.

The Minutemen’s defense carrying them in a championship game fit perfectly within the vision Carvel had for his team as the season began.

“Offense doesn’t win, defense wins,” Carvel said to the media before the year. “Our goal is to be one of the top defensive teams in the conference. And if we do all that, good things could come from it.”

And good things did.

Not only was the defensive side of the puck key for UMass on a night it only mustered one goal, but it’s also been instrumental for the entire season.

On top of that the Minutemen boasted three defenseman and a goaltender on Hockey East All-Star teams with Matthew Kessel, Marc Del Gaizo, Zac Jones and Lindberg all earning the honor.

Those accolades don’t even account for the likes of Chau–who came up with the biggest defensive play of the season–and other two-way members of the forward corps.

So while it might look like a team that finishes second in its conference in goal scoring and power play percentage is one that wins offensively, the 2020-21 iteration of UMass hockey certainly wasn’t. It’s always been the defense, and it was never on clearer display that the game that let them hoist the Lou Lamoriello Trophy at the end of it.

“We had good goaltending, but we had better play in front of them,” Carvel said. “Its an equation that works for us, and we’ll continue to ride it.”