Captain Jake Gaudet scored the lone goal for the Minutemen 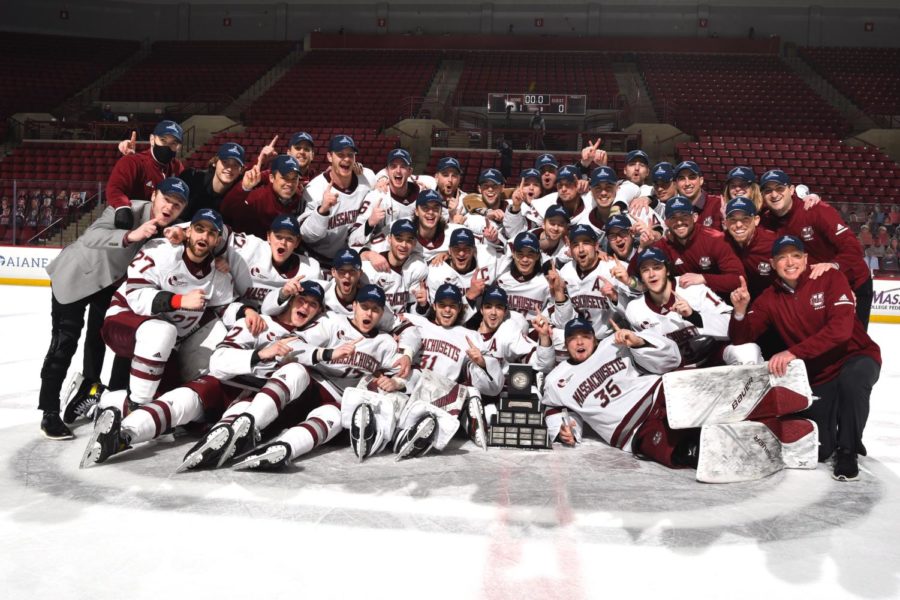 It was a moment no coach, player or fan will ever forget. The 2020-21 Massachusetts hockey team put its name in the history books, becoming the first to win a Hockey East Championship in program history.

“Profoundly important day for our hockey program,” coach Greg Carvel said after the game. “I’m extremely proud to be part of this program, I’m proud of the kids.”

It took nearly the full first frame for the Minutemen to put one past Henry Welsch, and even when captain Jake Gaudet did, it wasn’t pretty. The senior took a shot that Welsch turned aside, then collected his own rebound, and threw the puck off Welsch’s blocker from behind the net, getting a favorable deflection into the goal.

“I should have scored before that, I think,” Gaudet said. “Then the puck came to me and there were bodies in front, initially I was trying to get it out to Carson [Gicewicz] or just to hit something, and lucky enough it did.”

And on Saturday night, that one goal is all it took. For the next 45 minutes, neither team gained an edge over the other. UMass was unable to extend its lead further, but it wasn’t required to.

As has been the case all year, the Minutemen relied on their smothering defense to take away scoring chances from UMass Lowell. And what little the River Hawks did get were all swallowed up by Filip Lindberg, who ended his night with 16 saves and a shutout.

Lindberg’s most important moment came past the midway point in the third frame, when UML seemed to have the game tied. The junior scrambled on his back and somehow kept the puck from fully crossing the goal line, preserving a UMass lead at a crucial time.

“He’s grown to the point now where he’s completely steady, consistent and reliable no matter the situation,” Carvel said. “As well as the team plays in front of him you need your goalie to make a couple big saves, and tonight there were some pucks bouncing around and he kept them out.”

And when the final horn sounded, the celebration began for the Minutemen. Donning their Hockey East Champion caps, UMass covered the blue line, while four of its players— Lindberg, Gaudet, Zac Jones and Bobby Trivigno— were honored with All-Tournament team selections.

Trivigno also took home the award for tournament MVP for the six points he collected over the three postseason games.

But the real prize was what came next: The championship trophy. Carvel, along with the captains and seniors, gathered around commissioner Steve Metcalf and received the hardware, bringing it back to the team for an emotional celebration.

In addition to its major impact for the program, the HEA Tournament victory also ensured what was already all but guaranteed for the Minutemen: an NCAA Tournament berth, and a chance to avenge their 2019 championship loss.

UMass will learn its path in the NCAA Tournament on Sunday. But for now, the celebration continues.

“Our senior class has taken this program from last place to first,” Carvel said. “And they walked off the ice at Mullins, their last time ever off the ice, carrying a Hockey East trophy and I couldn’t be prouder of them.”