Underclassmen rise to the occasion to finish off UMass’ regular season 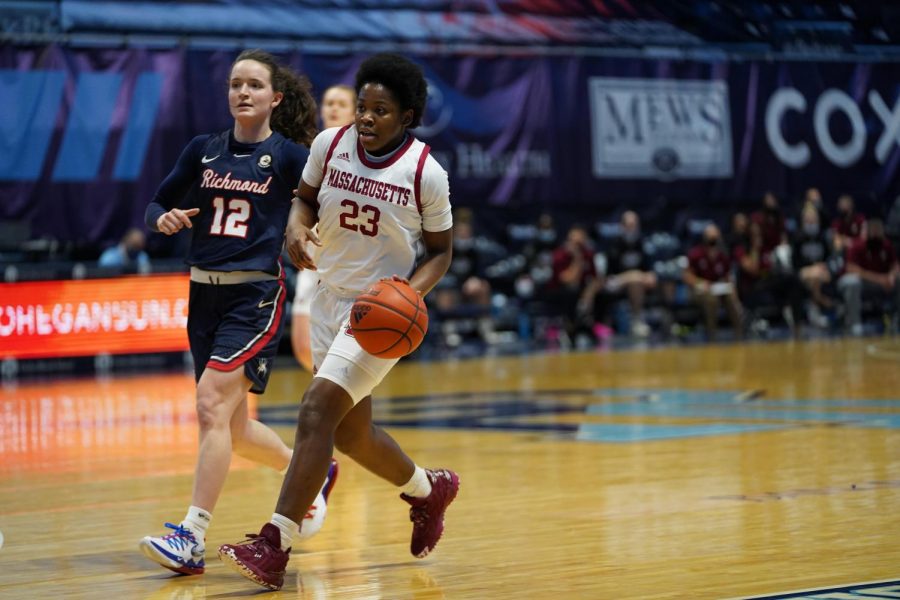 Graduate senior Maddie Sims sat in Rhode Island’s gym on Sunday afternoon, watching a virtual celebration and pre-recorded tribute messages. In addition to the COVID-19 restrictions preventing any in-person celebration—and as of recently home games at the Mullins Center — Sims watched while not wearing a uniform.

To get back on the court for a potential tournament run, Sims needed a strong performance from teammates in order to give her maximum recovery time to heal from a concussion. Although statistics show that the Massachusetts’s women’s basketball team has missed its defensive anchor, the underclassmen have stepped up in the last two games.

When the final chance for a shot landed in Mayo’s hand, the freshmen valorously launched a 3-pointer, putting her team up three with just under five minutes remaining. The freshman point guard finished with 17 points, including 2-for-4 from outside the arc.

“I think we have seen Be’Nyah Mayo really come into her own and step up,” head coach Tory Verdi said. “Recruiting her we always knew that she was this type of caliber player. She’s out there directing and she’s scoring and creating for herself and others.”

To capitalize on the UMass run, Makennah White found herself snatching two offensive boards in a row, giving her team multiple chances to stretch the lead and waste time on the clock. White left nothing left on the court in her first start of the season, finishing the game with 12 points and eight rebounds.

“I thought Makennah White was excellent here today,” Verdi said. “She brings a ton of energy and want to. Just hitting boards and getting rebound put backs and she had a really big day for us. We need that, we need that energy and excitement from those guys.”

As the game began to yield in the positive for UMass, the visual confidence was transparent.

With 45 seconds left in the game, sophomore Sydney Taylor hit a dagger corner 3-pointer despite being 1-of-6 from deep leading up to that shot. At the end of the day, shooters shoot, and Taylor has been the consistent 3-point threat for the Minutewomen all season long.

“That was a huge shot, we acknowledged that after the game,” Verdi said. “It was the right shot to take, and she stepped up and knocked it down… it gave us a lot of confidence at that point in time.”

Verdi often refers to his older players as “seasoned,” putting emphasis on the time they’ve had on the court, building experience that produces big numbers. As UMass looks to build momentum on the hunt for a banner, there is complete confidence in the “unseasoned,” players as well.

“I’m very confident actually, I know they have my back and I have there’s,” Philoxy said of her freshman and sophomore teammates heading into the tournament. “They grew up and realized this season is more important than they think it is…underclassmen or not, we are going to show everybody we are the best team.”