Wins came over UVM and Northeastern 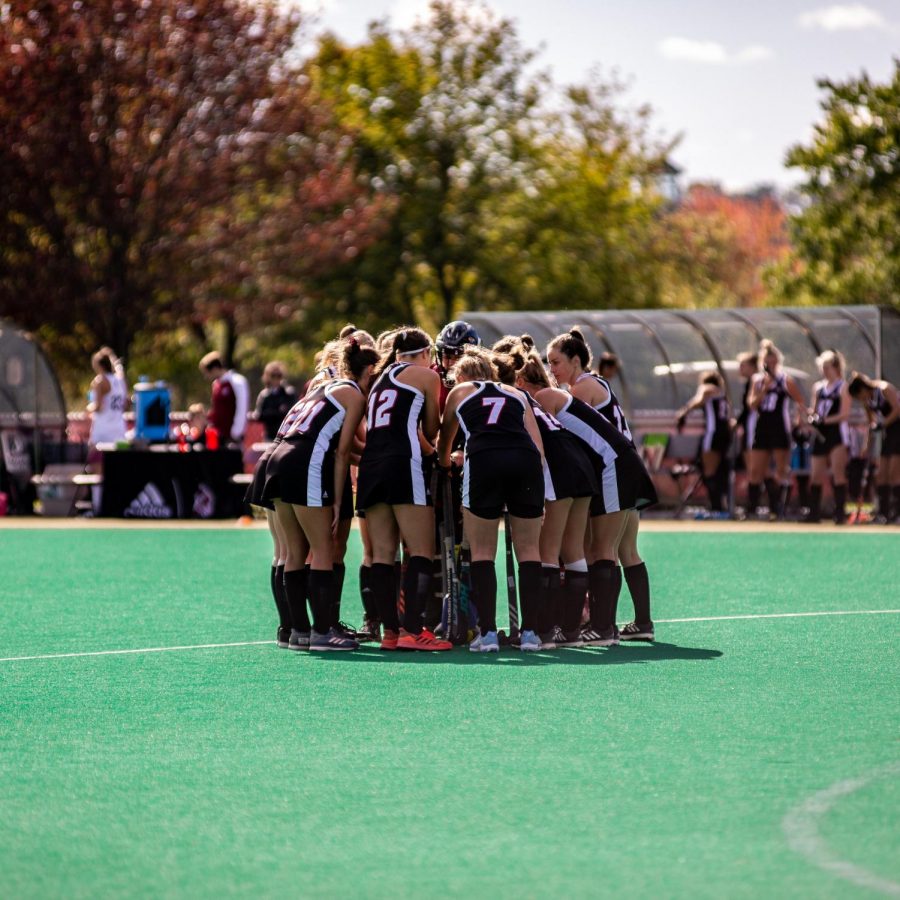 By Will Kharfen, Collegian Staff

Late action resulting in goals against Northeasterm, as well as up-tempo and aggressive play early against the Vermont resulted in the Massachusetts field hockey team winning both of its games this weekend in dominant fashion.

Against the Huskies, UMass was able to take charge in almost every facet of the game. Second half goals from midfielder Georgie McTear in the 44th minute off of a penalty stroke, and forward Josephine Ang in the 47th minute, despite a goal from Huskies’ sophomore Lauren Rowe off of their penalty stroke in the 52nd minute, allowed the maroon and white to hold on for the win.

“When we are able to get our speedy strikers into space they can be quite dangerous in our attacking circle,” said head coach Barb Weinberg.

Solid goalkeeping from freshman Brooke Richards, collecting five saves and denying a penalty stroke was crucial for UMass in their win as well. The Minutewomen statistically led 20 shots to eight, eight shots on goal to the Huskies’ six, as well as eight corners to Northeastern’s one, respectively, showcasing a very attacking heavy game.

“We felt like we played better against Northeastern on Friday, and we have to be able to replicate that every weekend,” Weinberg said.

The Minutewomen were also able to take advantage of UVM’s sloppy play and penalty corners to score three early goals against the Catamounts in their second win of the weekend, putting their fast-paced play on display once again.

“We have a pretty small roster, so our legs were pretty shot from Friday,” Weinberg said. “So, retaining possession saved some recovery runs.”

UMass’ goals all came during the first half, following an early goal from UVM’s forward Kate Hall, beginning with a goal from forward Bella Ianni off of a turnover from the top of the circle in the ninth minute. Ang then scored in the 10th minute off a deflection, as well as midfielder Jess Beech in the 18th minute.

“We have a lot of speed on our strike line with our outside midfielders, and we have been pretty solid at building the ball through the midfield, which then gives us a numbers up situation in our attacking third,” Weinberg said.

From there, the game slowed down, as team’s became much more conservative with their possessions, becoming much more defensively-minded.

“We felt like we were turning the ball over a lot in the first half, so our strategy in the second half was just to make sure to retain possession a bit more then we had done in the first half and to just really take care of the ball rather than creating a lot of turnovers,” Weinberg said.

Ang, the only Minutewomen to score in both games this weekend, has been an important part to the team’s success.

“She has been playing really well,” said Weinberg. “She has a lot of speed upfront and is very skilled, so she is good at drawing corners, but she is also able to get the ball into space and then rip a shot from anywhere.”

UMass plays at home again this Friday against Maine at 1 p.m.