Anthony Del Gaizo will rise to the occasion–whatever that means

The junior has two goals in the NCAA Tournament 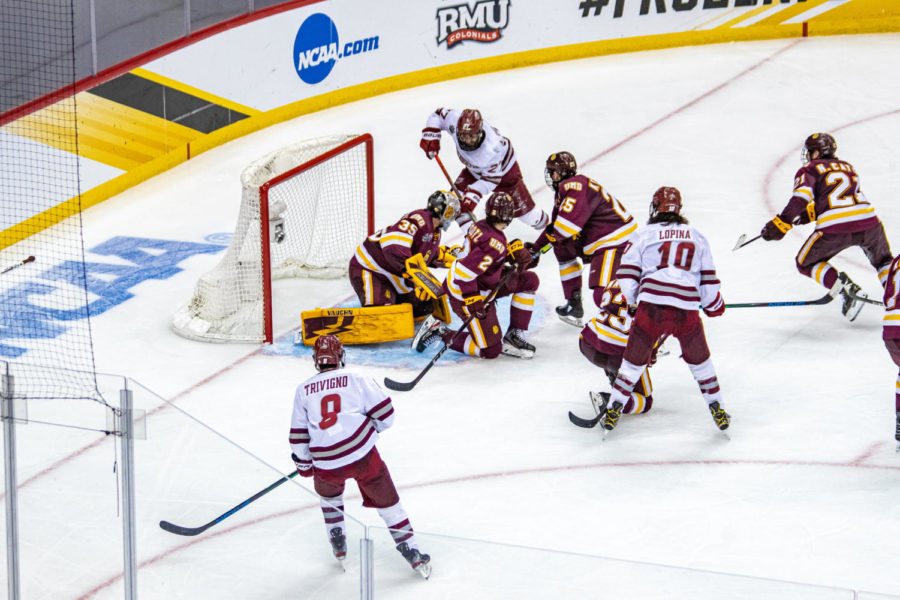 “The thing I’ve learned about Anthony,” head coach Greg Carvel said, “is he rises in the NCAA Tournament.”

UMass had been thoroughly outplayed through the first 48 minutes and found itself trailing 2-1. After two periods, the Minutemen—a team predicated on generating high shot totals—were getting outshot 26-11.

With only 12 minutes standing between UMass and its season coming to an end, it had to find a way to tie a game.

Scoring a goal was going to be a lot easier said than done. Not only were the Minutemen struggling to mount any real offensive pressure, but they were also without their top goal scorer, Carson Gicewicz.

“He was the guy to go up and take the place of Gicewicz,” Carvel said, “because Anthony has played as heavy as anybody.”

Filling in for Gicewicz on the top line was Del Gaizo, a junior forward who had yet to deliver on his 40-goal, 72-point season in the USHL. In his first two seasons in Amherst, Del Gaizo had tallied just eight goals and 18 points over 68 games.

His 2020-21 season looked like much of the same. By the end of the regular season, he didn’t have a goal and had just three assists to his name. After three Hockey East Tournament games his stat line hadn’t changed. He was just a bottom six forward providing physicality to UMass’ ranks.

Then, the NCAA Tournament came around the corner, and so did Del Gaizo’s play.

In the Minutemen’s first game he got his first goal of the season, an empty netter to put Lake Superior State out of reach. In game two he brought his signature hard-nosed play style to Bemidji State.

The Frozen Four game against Minnesota Duluth was a whole different animal though. With UMass looking for a break to go its way, Del Gaizo delivered.

After a Josh Lopina shot was denied from out in front of the net, Del Gaizo worked his way to the loose puck in the crease and buried it, tying the game. It was his first non-empty net goal of the season and it couldn’t have come at a bigger time.

“That was probably the biggest goal of the year for us,” Carvel said, “even bigger than the overtime goal because it felt like the overtime goal was an eventuality. But that goal in the third period, we needed that. It gave us a huge, huge bump and we never turned back from that.”

After a game skating on the wing of the first line, Del Gaizo will shift back down in the lineup for Saturday’s title game tilt.

Even back on one of the bottom two lines, Del Gaizo showed his ability to contribute on the offensive end.

And even if he doesn’t leave his mark on the scoresheet, there’s no doubt that No. 27 will find himself at the middle of things, laying hits, making defensive plays and winning puck battles. In other words, playing the kind of hockey that has made him a fixture of UMass lineups for three seasons now.